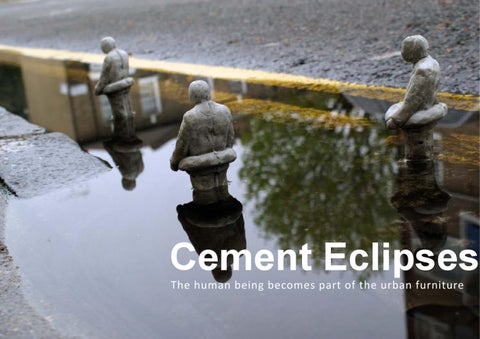 Cement Eclipses The human being becomes part of the urban furniture

The human being becomes part of the urban furniture

The use of cement in the construction sector has become a fingerprint that reveals the human face of nature. In Spain, itâ&#x20AC;&#x2122;s used 54.2 million tons of cement in 2007. The construction boom devastated parts of the Spanish coast. Nature already has become what we see vaguely from one city to another. Urban space has become the product of the modern tension between man denatured and nature dehumanized as Rafael Argullol said. Cement eclipses is a research project of urban space that runs between the fields of sculpture and photography. The sculpture is used as a starting point and photography as a witness to the execution of installations for later viewing or exhibition. The small pieces (25 cm. Approx) are made in cement, of which copies are reproduced using silicone molds. These are small figures representing a kind of metamorphosis in which the man leaves his roles as citizens camouflaging themsel-

ves with the city and slowly becomes part of furniture. In this way confirms the voluntary isolation of human being with regard to nature, hidden among the sidewalks, streets, walls, etc., becoming the urban environment in their natural habitat.

new owner, or collector of piece. The figures represent a critical and ironic scenes of our daily routine: a purchase, a phone call, a long wait, our disengagement ecological, etc.. Perplexing images you are seeing the demolition and reconstruction of everything around us.

This project started in 2006 as a nomal project and continuous its process with embodiment in which the installation is mixed with urban street art. Cement eclipses was Isaac Cordal discovered in urban areas of several Euro- Enero 2010 pean cities including Berlin, London, Brussels, Liege, Barcelona, Vigo, etc.. Many of the photographs in this dossier have been taken in London between September 2008 and January 2009, where I currently reside. These installation have a high component ephemeral, and their degree of permanence in time depends on their luck in the urban jungle, any citizen can become an unwilling spectator, and in this transition, also in the 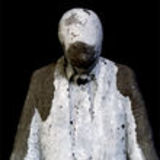 Cement eclipses is a research project of urban space that runs between the fields of sculpture and photography.

Cement eclipses is a research project of urban space that runs between the fields of sculpture and photography.