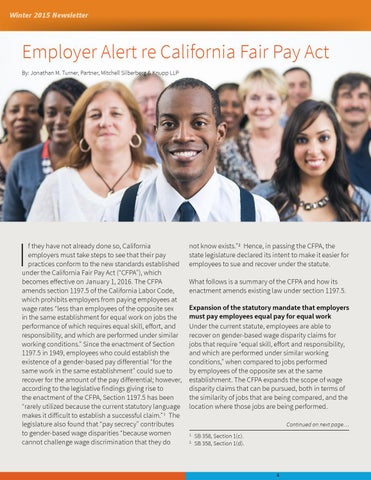 f they have not already done so, California employers must take steps to see that their pay practices conform to the new standards established under the California Fair Pay Act (“CFPA”), which becomes effective on January 1, 2016. The CFPA amends section 1197.5 of the California Labor Code, which prohibits employers from paying employees at wage rates “less than employees of the opposite sex in the same establishment for equal work on jobs the performance of which requires equal skill, effort, and responsibility, and which are performed under similar working conditions.” Since the enactment of Section 1197.5 in 1949, employees who could establish the existence of a gender-based pay differential “for the same work in the same establishment” could sue to recover for the amount of the pay differential; however, according to the legislative findings giving rise to the enactment of the CFPA, Section 1197.5 has been “rarely utilized because the current statutory language makes it difficult to establish a successful claim.”1 The legislature also found that “pay secrecy” contributes to gender-based wage disparities “because women cannot challenge wage discrimination that they do

not know exists.”2 Hence, in passing the CFPA, the state legislature declared its intent to make it easier for employees to sue and recover under the statute. What follows is a summary of the CFPA and how its enactment amends existing law under section 1197.5. Expansion of the statutory mandate that employers must pay employees equal pay for equal work Under the current statute, employees are able to recover on gender-based wage disparity claims for jobs that require “equal skill, effort and responsibility, and which are performed under similar working conditions,” when compared to jobs performed by employees of the opposite sex at the same establishment. The CFPA expands the scope of wage disparity claims that can be pursued, both in terms of the similarity of jobs that are being compared, and the location where those jobs are being performed. Continued on next page… 1. 2.