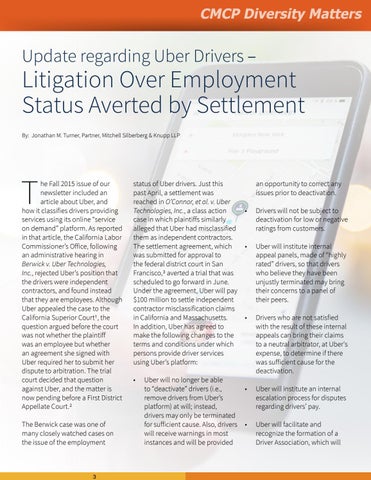 he Fall 2015 issue of our newsletter included an article about Uber, and how it classifies drivers providing services using its online “service on demand” platform. As reported in that article, the California Labor Commissioner’s Office, following an administrative hearing in Berwick v. Uber Technologies, Inc., rejected Uber’s position that the drivers were independent contractors, and found instead that they are employees. Although Uber appealed the case to the California Superior Court1, the question argued before the court was not whether the plaintiff was an employee but whether an agreement she signed with Uber required her to submit her dispute to arbitration. The trial court decided that question against Uber, and the matter is now pending before a First District Appellate Court.2 The Berwick case was one of many closely watched cases on the issue of the employment

status of Uber drivers. Just this past April, a settlement was reached in O’Connor, et al. v. Uber Technologies, Inc., a class action case in which plaintiffs similarly alleged that Uber had misclassified them as independent contractors. The settlement agreement, which was submitted for approval to the federal district court in San Francisco,3 averted a trial that was scheduled to go forward in June. Under the agreement, Uber will pay $100 million to settle independent contractor misclassification claims in California and Massachusetts. In addition, Uber has agreed to make the following changes to the terms and conditions under which persons provide driver services using Uber’s platform: •

Uber will no longer be able to “deactivate” drivers (i.e., remove drivers from Uber’s platform) at will; instead, drivers may only be terminated for sufficient cause. Also, drivers will receive warnings in most instances and will be provided

an opportunity to correct any issues prior to deactivation. •

Drivers will not be subject to deactivation for low or negative ratings from customers.

Uber will institute internal appeal panels, made of “highly rated” drivers, so that drivers who believe they have been unjustly terminated may bring their concerns to a panel of their peers.

Drivers who are not satisfied with the result of these internal appeals can bring their claims to a neutral arbitrator, at Uber's expense, to determine if there was sufficient cause for the deactivation.

Uber will institute an internal escalation process for disputes regarding drivers’ pay.

Uber will facilitate and recognize the formation of a Driver Association, which will