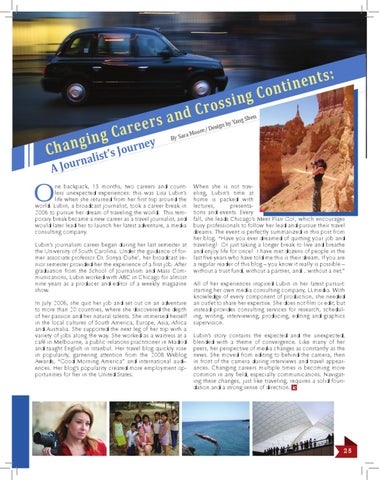 ne backpack, 15 months, two careers and countless unexpected experiences: this was Lisa Lubin’s life when she returned from her first trip around the world. Lubin, a broadcast journalist, took a career break in 2006 to pursue her dream of traveling the world. This temporary break became a new career as a travel journalist, and would later lead her to launch her latest adventure, a media consulting company. Lubin’s journalism career began during her last semester at the University of South Carolina. Under the guidance of former associate professor Dr. Sonya Duhe’, her broadcast senior semester provided her the experience of a first job. After graduation from the School of Journalism and Mass Communications, Lubin worked with ABC in Chicago for almost nine years as a producer and editor of a weekly magazine show. In July 2006, she quit her job and set out on an adventure to more than 20 countries, where she discovered the depth of her passion and her natural talents. She immersed herself in the local cultures of South America, Europe, Asia, Africa and Australia. She supported the next leg of her trip with a variety of jobs along the way. She worked as a waitress at a café in Melbourne, a public relations practitioner in Madrid and taught English in Istanbul. Her travel blog quickly rose in popularity, garnering attention from the 2008 Weblog Awards, “Good Morning America” and international audiences. Her blog’s popularity created more employment opportunities for her in the United States.

When she is not traveling, Lubin’s time at home is packed with lectures, presentations and events. Every fall, she leads Chicago’s Meet Plan Go!, which encourages busy professionals to follow her lead and pursue their travel dreams. The event is perfectly summarized in this post from her blog. “Have you ever dreamed of quitting your job and traveling? Or just taking a longer break to live and breathe and enjoy life for once? I have met dozens of people in the last five years who have told me this is their dream. If you are a regular reader of this blog – you know it really is possible – without a trust fund, without a partner, and…without a net.” All of her experiences inspired Lubin in her latest pursuit: starting her own media consulting company, LLmedia. With knowledge of every component of production, she needed an outlet to share her expertise. She does not film or edit, but instead provides consulting services for research, scheduling, writing, interviewing, producing, editing and graphics supervision. Lubin’s story contains the expected and the unexpected, blended with a theme of convergence. Like many of her peers, her perspective of media changes as constantly as the news. She moved from editing to behind the camera, then in front of the camera during interviews and travel appearances. Changing careers multiple times is becoming more common in any field, especially communications. Navigating these changes, just like traveling, requires a solid foundation and a strong sense of direction.