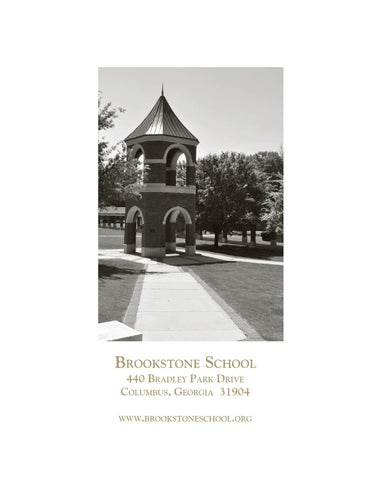 Giving. It is at the heart of every religion, culture, and society. Our community

values those who give, and our nation is built on the backs of those who gave before us. This Annual Report honors those who gave to Brookstone School during the 2011-2012 school year. In the report you will see a multitude of donors as well as a variety of giving levels. Each person who gives is exceptional in our eyes and helps support the education of a young person at our school. As you know, tuition only covers 65% of the cost of educating each Brookstone student. Those who give to Brookstone help absorb the cost of the overall education so that tuition is maintained at a level accessible to a wider range of individuals in our community. We have students from every walk of life. Some are not able to cover the cost of tuition; others can pay tuition but little more, while still others give so that many students can benefit from a great education. We are thankful that the school is able to reach a diverse group of individuals through financial aid in order to allow our students to learn from others; this aspect of our education is just as valuable as the incredible things going on in the classroom. We must educate not only the minds of the students; we must also educate the students socially so that they learn what it means to be part of a diverse society. We need our alumni, parents, grandparents, and friends to give sacrificially to Brookstone so that we may continue to offer a premier education to the students of the Chattahoochee Valley. Each dollar given to Brookstone is valued and spent wisely. Whether the monies go to enhancements within the classroom, professional development for a teacher, or equipment for an athletic team, the school attempts to provide a first class education for our students. The Brookstone administrative team is constantly challenging itself to provide nothing less than the best for our students. The school is continuously defining, refining, and evolving in order to meet each student where they are and provide an education that meets the needs of the whole child. Our donors make it possible to provide the finest education possible for each child. Brookstone School is experiencing one of its most exciting periods in its history. The school is finding innovative ways to improve the education of our young people. The Brookstone faculty is taking advantage of professional development to both attend and present at conferences nationwide. And the school has invested in research-driven professional development opportunities to train our faculty on the latest developments on brain research, gender learning, multisensory techniques in reading, cross-curriculum writing, as well as the use of manipulatives and critical thinking in the math classroom. It would be difficult to find an education the caliber of Brookstone School anywhere else in the Southeast. We want to thank those who have given by honoring our 2011-2012 donors in this Annual Report. You are a blessing to the school and to the students who will be our next generation of leaders. With sincere thanks,

Honor is a very powerful word that defines us as individuals. It is the cornerstone by which each person chooses to live his or her life. We have all found inspiration to live honorably through our family, friends, and those mentors who have helped shape our lives. While attending Brookstone, I found this inspiration through my teachers, coaches, and most importantly the Honor Code itself. Through athletics, coach Robert Moore taught me how to compete and helped in my maturation on and off the basketball court. I remember one particular game at Taylor County where Coach Moore showed the team how to compete honorably. During the pregame we were sitting in the locker room getting focused and preparing for the upcoming competition. While the other team started banging on the locker room door and shouting comments about our team, Coach Moore told us to say nothing in return but rather give everything on the court. Competing with honor remains a huge emphasis at Brookstone and I have carried this notion with me.

The Honor Code at Brookstone is something I took very seriously. Although it may sound cliché, your integrity is something that can never be taken away from you. You can give it away in an instance, and may never get it back. The environment at Brookstone facilitates the development of individuals who really take the Honor Code to heart. The teachers and faculty embrace the Honor Code and their sense of integrity trickles down to the students. As a West Point graduate and Army Officer, you are expected to live the Honor Code daily and without hesitation. While attending West Point, I experienced a similar sense of inspiration from my teachers and intramural instructors. Additionally, the Honor Code at West Point parallels that of Brookstone’s, namely that a cadet or student will not “Lie, Cheat, Steal or tolerate those who do.” I easily adapted to the West Point environment because the faculty and coaches at Brookstone showed me the importance of adhering to the Honor Code and honorable living. Their example gave me the tools to succeed in school and in life. They showed me how to treat people and safeguard my integrity. I am confident that Brookstone will continue to help individuals build a profound sense of honor who truly embrace its meaning.

Young people amaze me. It’s as though they can’t conceive of the seemingly impossible, so they accomplish just that. And, Brookstone has a tradition of nurturing and encouraging this wide-eyed naïveté of a young person’s potential. In fact, as is Brookstone’s reputation, they expect it in changing our world. Nothing could make me more proud of my alma mater than knowing that since I started the Habitat for Humanity Campus Chapter in 1999, Brookstone students have since built 10 houses for families in need. Ten?! I vividly remember my voice cracking as I pitched the crazy idea of building and raising funds for a house during club sign up day. I crossed my fingers to get a handful of people to sign up to make this seemingly impossible goal a reality. My mouth dropped when I was handed a completely full sign up sheet with more than 100 names on it.

Brookstone had nurtured our natural desire to help others and empowered us with the belief that we could make a difference– a bunch of teenagers raising funds and building a house seemed entirely possible to us as well as important. That year, Millard Fuller, the founder of Habitat came to speak to our school and his words and his story inspired. At that time, Brookstone’s campus chapter was the largest in the nation and now Brookstone has it’s own story in it’s role in the community.

I am fully convinced that without instilling the value of service, we fall short of reaching our full potential and Brookstone understood that fully in its support of Key Club, insistence that students be involved in the community through service and introducing even its youngest students to service projects. I remember sitting in Nan and Sam Pate’s living room listening to a guest speaker from Habitat describe their vision. Our teachers shared these values and created opportunities for us. Service gives us a perspective, it teaches us leadership, it humbles. Service connects us to each other and makes us more human. “Be human,” These were the last parting words of Pat Khazaeli as she sent us off during her commencement speech. I have remembered that advice above all others and found it to be a sizable challenge in today’s world. My high school sweetheart, Tommy Bernard (‘00, pictured above with Nicole at a fundraising event), and I fell in love working on Habitat fundraising at Brookstone. Fourteen years and three children later we still have a passion for its mission and still stand on Brookstone’s values that serving is a natural responsibility and privilege. In some ways, our understanding of service has continued to develop as we now teach it to our own children. Our daughter and I started a fundraiser called “Little Hands Bakery” in which preschoolers and parents bake cookies for pre-ordered packages for Duke University students during exam week from which all proceeds go to Habitat. Our motto is “even the littlest hands can make a difference”–a lesson I learned in school. Service has become a way to bond as a family and a couple and to instill in our own children values so close to our hearts. Millard Fuller, the founder of Habitat once told me, “There’s something contagious about being bold.” I’d say Brookstone students have got that one down.

In Memory of Joe Sparks and In Honor of Caroline Sparks and Athletics Mrs. Joe C. Sparks, Sr.

In Honor of Delaney and Stephen Poydasheff Col. and Mrs. Robert S. Poydasheff

In Honor of Katie Shaw Mr. and Mrs. Roger Hewitt

In Honor of Eighth Grade Teachers and Administrators Ms. Sarah A. Burgin, 2016

In Honor of Jim and Nancy McCallie Dr. and Mrs. James P. Fadely

In Honor of Minna and Charlie Straus Mrs. Jack B. Straus, Sr.

In Honor of the Peek Family Mr. and Mrs. A. Comer Hobbs, Sr.

In Honor of Uncle Quigg’s Birthday Mr. and Mrs. Craig A. Courville

In Honor of William and Jacob Marks Mr. and Mrs. C. C. Quick

In 2008, Georgia established a program whereby citizens could redirect some of their tax dollars to a School Scholarship Organization to support public school students who wish to attend a private school. This program allows individuals, couples and C-corporations to participate. Specific schools can be designated by the donor. In 2011, Brookstone received $245,038.00 through this program which was made available for scholarship assistance. Should you want more information on this program and how you may redirect a portion of your state taxes to benefit Brookstone, please contact Lisa White, Development Director, at 706.324.1392 or lwhite@brookstoneschool.org. 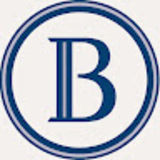