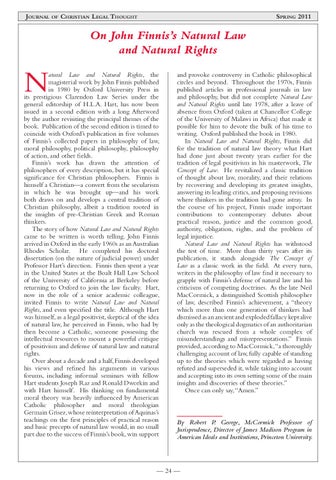 atural Law and Natural Rights, the magisterial work by John Finnis published in 1980 by Oxford University Press in its prestigious Clarendon Law Series under the general editorship of H.L.A. Hart, has now been issued in a second edition with a long Afterword by the author revisiting the principal themes of the book. Publication of the second edition is timed to coincide with Oxford’s publication in five volumes of Finnis’s collected papers in philosophy of law, moral philosophy, political philosophy, philosophy of action, and other fields. Finnis’s work has drawn the attention of philosophers of every description, but it has special significance for Christian philosophers. Finnis is himself a Christian—a convert from the secularism in which he was brought up—and his work both draws on and develops a central tradition of Christian philosophy, albeit a tradition rooted in the insights of pre-Christian Greek and Roman thinkers. The story of how Natural Law and Natural Rights came to be written is worth telling. John Finnis arrived in Oxford in the early 1960s as an Australian Rhodes Scholar. He completed his doctoral dissertation (on the nature of judicial power) under Professor Hart’s direction. Finnis then spent a year in the United States at the Boalt Hall Law School of the University of California at Berkeley before returning to Oxford to join the law faculty. Hart, now in the role of a senior academic colleague, invited Finnis to write Natural Law and Natural Rights, and even specified the title. Although Hart was himself, as a legal positivist, skeptical of the idea of natural law, he perceived in Finnis, who had by then become a Catholic, someone possessing the intellectual resources to mount a powerful critique of positivism and defense of natural law and natural rights. Over about a decade and a half, Finnis developed his views and refined his arguments in various forums, including informal seminars with fellow Hart students Joseph Raz and Ronald Dworkin and with Hart himself. His thinking on fundamental moral theory was heavily influenced by American Catholic philosopher and moral theologian Germain Grisez, whose reinterpretation of Aquinas’s teachings on the first principles of practical reason and basic precepts of natural law would, in no small part due to the success of Finnis’s book, win support

and provoke controversy in Catholic philosophical circles and beyond. Throughout the 1970s, Finnis published articles in professional journals in law and philosophy, but did not complete Natural Law and Natural Rights until late 1978, after a leave of absence from Oxford (taken at Chancellor College of the University of Malawi in Africa) that made it possible for him to devote the bulk of his time to writing. Oxford published the book in 1980. In Natural Law and Natural Rights, Finnis did for the tradition of natural law theory what Hart had done just about twenty years earlier for the tradition of legal positivism in his masterwork, The Concept of Law. He revitalized a classic tradition of thought about law, morality, and their relations by recovering and developing its greatest insights, answering its leading critics, and proposing revisions where thinkers in the tradition had gone astray. In the course of his project, Finnis made important contributions to contemporary debates about practical reason, justice and the common good, authority, obligation, rights, and the problem of legal injustice. Natural Law and Natural Rights has withstood the test of time. More than thirty years after its publication, it stands alongside The Concept of Law as a classic work in the field. At every turn, writers in the philosophy of law find it necessary to grapple with Finnis’s defense of natural law and his criticisms of competing doctrines. As the late Neil MacCormick, a distinguished Scottish philosopher of law, described Finnis’s achievement, a “theory which more than one generation of thinkers had dismissed as an ancient and exploded fallacy kept alive only as the theological dogmatics of an authoritarian church was rescued from a whole complex of misunderstandings and misrepresentations.” Finnis provided, according to MacCormick, “a thoroughly challenging account of law, fully capable of standing up to the theories which were regarded as having refuted and superseded it, while taking into account and accepting into its own setting some of the main insights and discoveries of these theories.” Once can only say, “Amen.” 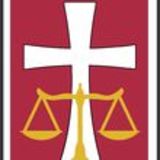