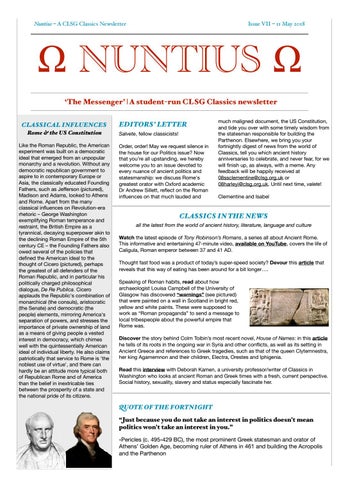 Ω NUNTIUS Ω ‘The Messenger’ | A student-run CLSG Classics newsletter CLASSICAL INFLUENCES Rome & the US Constitution Like the Roman Republic, the American experiment was built on a democratic ideal that emerged from an unpopular monarchy and a revolution. Without any democratic republican government to aspire to in contemporary Europe or Asia, the classically educated Founding Fathers, such as Jeﬀerson (pictured), Madison and Adams, looked to Athens and Rome. Apart from the many classical influences on Revolution-era rhetoric – George Washington exemplifying Roman temperance and restraint, the British Empire as a tyrannical, decaying superpower akin to the declining Roman Empire of the 5th century CE – the Founding Fathers also owed several of the policies that defined the American ideal to the thought of Cicero (pictured), perhaps the greatest of all defenders of the Roman Republic, and in particular his politically charged philosophical dialogue, De Re Publica. Cicero applauds the Republic's combination of monarchical (the consuls), aristocratic (the Senate) and democratic (the people) elements, mirroring America's separation of powers, and stresses the importance of private ownership of land as a means of giving people a vested interest in democracy, which chimes well with the quintessentially American ideal of individual liberty. He also claims patriotically that service to Rome is 'the noblest use of virtue', and there can hardly be an attitude more typical both of Republican Rome and of America than the belief in inextricable ties between the prosperity of a state and the national pride of its citizens.

Order, order! May we request silence in the house for our Politics issue? Now that you’re all upstanding, we hereby welcome you to an issue devoted to every nuance of ancient politics and statesmanship: we discuss Rome's greatest orator with Oxford academic Dr Andrew Sillett, reflect on the Roman influences on that much lauded and

much maligned document, the US Constitution, and tide you over with some timely wisdom from the statesman responsible for building the Parthenon. Elsewhere, we bring you your fortnightly digest of news from the world of Classics, tell you which ancient history anniversaries to celebrate, and never fear, for we will finish up, as always, with a meme. Any feedback will be happily received at 08ssclementine@clsg.org.uk or 08harleyi@clsg.org.uk. Until next time, valete!

CLASSICS IN THE NEWS all the latest from the world of ancient history, literature, language and culture Watch the latest episode of Tony Robinson’s Romans, a series all about Ancient Rome. This informative and entertaining 47-minute video, available on YouTube, covers the life of Caligula, Roman emperor between 37 and 41 AD.

Thought fast food was a product of today’s super-speed society? Devour this article that reveals that this way of eating has been around for a bit longer….

Speaking of Roman habits, read about how archaeologist Louisa Campbell of the University of Glasgow has discovered “warnings” (see pictured) that were painted on a wall in Scotland in bright red, yellow and white paints. These were supposed to work as “Roman propaganda” to send a message to local tribespeople about the powerful empire that Rome was.

Discover the story behind Colm Toibin’s most recent novel, House of Names: in this article he tells of its roots in the ongoing war in Syria and other conflicts, as well as its setting in Ancient Greece and references to Greek tragedies, such as that of the queen Clytemnestra, her king Agamemnon and their children, Electra, Orestes and Iphigenia.

Read this interview with Deborah Kamen, a university professor/writer of Classics in Washington who looks at ancient Roman and Greek times with a fresh, current perspective. Social history, sexuality, slavery and status especially fascinate her.

THIS FORTNIGHT IN ANCIENT HISTORY On 11th May 330 AD, Constantinople (originally Byzantium) became the capital of the Roman Empire, following its re-foundation under Roman emperor Constantine I. From then on, the capital grew to be hugely influential and wealthy, with prestigious titles like ‘Basileuousa’ (‘Queen of Cities’) and ‘Megalopolis’ (‘the Great City’).

THE EAGER ETYMOLOGIST: exploring the stories behind common English words

THE CLASSICS INTERVIEW Dr Andrew Sillett Andrew Sillett studied Classics at Brasenose College, Oxford, and wrote his doctorate on the reception of the orator and politician Cicero in the early Roman Empire. He later worked at St Anne's College and moved to St Hilda's College last year as Departmental Lecturer in Latin Literature and Roman History.

What drew you to Classics initially, and why did you decide to specialise in the life and times of Cicero?

ostracise: To exclude from a society or group. (from the Oxford Dictionary)

Our verb 'to ostracise', which can refer equally to political or social exclusion, has its origin in the Athenian political process of ostrakismos, wherein the citizen assembly would vote annually to exile a particular public figure from Athens for ten years. Names of citizens to be exiled were written on pottery shards called ostraka; the one below indicates a vote to exile Cimon, son of Miltiades, a celebrated military hero from the Persian Wars, whose proSpartan views and disastrous attempt to help the Spartan crush a helot revolt brought on his exile.

My school didn't oﬀer any Classical subjects, so I discovered Classics rather by accident. My plan had been to study Modern Languages at University, but I was sorry to be leaving History and English Literature A Levels behind. I took a wrong turn at an Open Day and discovered my future tutor, Llewelyn Morgan, selling the subject on the grounds that it perfectly combined the study of languages, literature and history. I never looked back! As for what drew me to Cicero, I suspect it's his failings and foibles. There's something uniquely threedimensional about his character that makes him very appealing.

What do you think Cicero's main strengths and weaknesses were as an orator and politician?

I think most of what went wrong in Cicero's life was beyond his power to change, while most of what went right in it was down to his own work. His greatest strength, as both an orator and as a politician, was probably his ability to turn adversities to his advantage. As for his greatest weakness, I suspect it's the fact he never married someone he loved.

What lessons can we learn in the modern world from the political landscape of Cicero’s world, the late Roman Republic?

Five years ago I would have said that the world of Roman politics was too divisive and violent to oﬀer any sensible comparanda to the modern world. In the current climate,

Issue VII – 11 May 2018 however...I suspect the biggest lesson to learn is that one should never underestimate charisma as a political force. When big personalities clash against venerable institutions there's no telling which will win.

Cicero's life is perhaps the best through which to track the demise of the Roman Republic. In this process of decline, do you think there was any one 'turning point' after which the Republic was doomed, and when do you think this was? I have never been able to make up my mind as to whether the collapse of Republican government brought about the Roman Civil War [between Pompey and Julius Caesar] or whether the war brought about the collapse of the Republic. What goes hand in hand with that indecision is an inability to locate a good turning point. If you're twisting my arm, I'd probably say the assassination of Julius Caesar. Had he died of an aneurysm on the way to the Theatre of Pompey things might have returned to the status quo ante, at least for a while. After he was assassinated, though, it is much harder to picture normality reasserting itself. However, the great American classicist Erich Gruen thinks the answer to this question is the 'Social War' [between Rome and its Italian allies, over the allies' lack of Roman citizenship], in which case the Republic was doomed before Cicero left school.

What will a student gain from reading Cicero's speeches and writings, and which work would you recommend as an 'introduction' to Cicero? I have frequently wrestled with this question when trying to explain to my family why I do what I do. Strangely, I've found that Cicero's De Divinatione (in which he and his brother argue for and against a key piece of the Roman state religion) is the work that is easiest for anyone to enjoy. It certainly makes Dawkins and the other New Atheists look like amateurs. I'm not sure I have a general answer for your first question. There are so many things one can take from reading Cicero that it largely depends what you're looking for when you pick up the book!