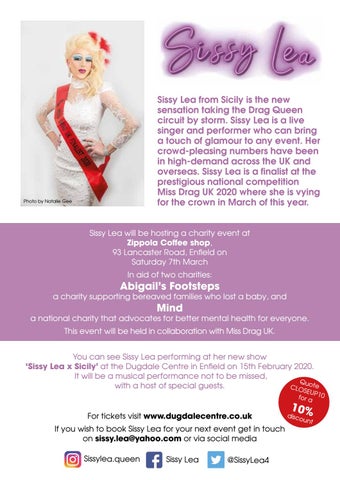 Sissy Lea from Sicily is the new sensation taking the Drag Queen circuit by storm. Sissy Lea is a live singer and performer who can bring a touch of glamour to any event. Her crowd-pleasing numbers have been in high-demand across the UK and overseas. Sissy Lea is a finalist at the prestigious national competition Miss Drag UK 2020 where she is vying for the crown in March of this year.

a charity supporting bereaved families who lost a baby, and

a national charity that advocates for better mental health for everyone. This event will be held in collaboration with Miss Drag UK. You can see Sissy Lea performing at her new show ‘Sissy Lea x Sicily’ at the Dugdale Centre in Enfield on 15th February 2020. It will be a musical performance not to be missed, Qu with a host of special guests. CLO ote

For tickets visit www.dugdalecentre.co.uk If you wish to book Sissy Lea for your next event get in touch on sissy.lea@yahoo.com or via social media