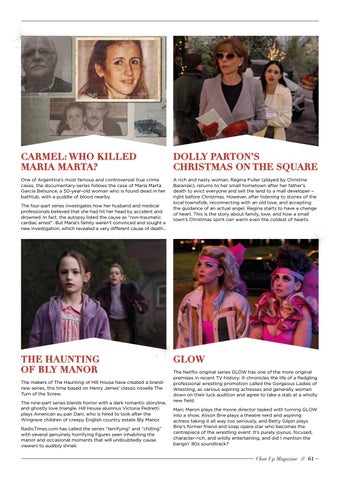 CARMEL: WHO KILLED MARI A MARTA?

DOLLY PARTON’S CHRISTMAS ON THE SQUARE

One of Argentina’s most famous and controversial true crime cases, the documentary-series follows the case of María Marta García Belsunce, a 50-year-old woman who is found dead in her bathtub, with a puddle of blood nearby.

A rich and nasty woman, Regina Fuller (played by Christine Baranski), returns to her small hometown after her father’s death to evict everyone and sell the land to a mall developer – right before Christmas. However, after listening to stories of the local townsfolk, reconnecting with an old love, and accepting the guidance of an actual angel, Regina starts to have a change of heart. This is the story about family, love, and how a small town’s Christmas spirit can warm even the coldest of hearts.

The four-part series investigates how her husband and medical professionals believed that she had hit her head by accident and drowned. In fact, the autopsy listed the cause as “non-traumatic cardiac arrest”. But Maria’s family weren’t convinced and sought a new investigation, which revealed a very different cause of death…

T H E H AU N T I N G OF BLY MANOR The makers of The Haunting of Hill House have created a brandnew series, this time based on Henry James’ classic novella The Turn of the Screw. The nine-part series blends horror with a dark romantic storyline, and ghostly love triangle. Hill House alumnus Victoria Pedretti plays American au pair Dani, who is hired to look after the Wingrave children of creepy English country estate Bly Manor. RadioTimes.com has called the series “terrifying” and “chilling” with several genuinely horrifying figures seen inhabiting the manor and occasional moments that will undoubtedly cause viewers to audibly shriek.

GLOW The Netflix original series GLOW has one of the more original premises in recent TV history: It chronicles the life of a fledgling professional wrestling promotion called the Gorgeous Ladies of Wrestling, as various aspiring actresses and generally women down on their luck audition and agree to take a stab at a wholly new field. Marc Maron plays the movie director tasked with turning GLOW into a show, Alison Brie plays a theatre nerd and aspiring actress taking it all way too seriously, and Betty Gilpin plays Brie’s former friend and soap opera star who becomes the centrepiece of the wrestling event. It’s purely joyous, focused, character-rich, and wildly entertaining, and did I mention the bangin’ 80s soundtrack?