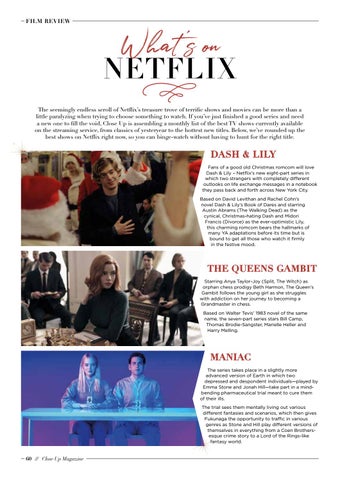 What's on NETFLIX The seemingly endless scroll of Netflix’s treasure trove of terrific shows and movies can be more than a little paralyzing when trying to choose something to watch. If you’ve just finished a good series and need a new one to fill the void, Close Up is assembling a monthly list of the best TV shows currently available on the streaming service, from classics of yesteryear to the hottest new titles. Below, we’ve rounded up the best shows on Netflix right now, so you can binge-watch without having to hunt for the right title.

DASH & LI LY Fans of a good old Christmas romcom will love Dash & Lily – Netflix’s new eight-part series in which two strangers with completely different outlooks on life exchange messages in a notebook they pass back and forth across New York City. Based on David Levithan and Rachel Cohn’s novel Dash & Lily’s Book of Dares and starring Austin Abrams (The Walking Dead) as the cynical, Christmas-hating Dash and Midori Francis (Divorce) as the ever-optimistic Lily, this charming romcom bears the hallmarks of many YA adaptations before its time but is bound to get all those who watch it firmly in the festive mood.

THE QUEENS GAMBIT Starring Anya Taylor-Joy (Split, The Witch) as orphan chess prodigy Beth Harmon, The Queen’s Gambit follows the young girl as she struggles with addiction on her journey to becoming a Grandmaster in chess. Based on Walter Tevis’ 1983 novel of the same name, the seven-part series stars Bill Camp, Thomas Brodie-Sangster, Marielle Heller and Harry Melling.

M A N IAC The series takes place in a slightly more advanced version of Earth in which two depressed and despondent individuals—played by Emma Stone and Jonah Hill—take part in a mindbending pharmaceutical trial meant to cure them of their ills. The trial sees them mentally living out various different fantasies and scenarios, which then gives Fukunaga the opportunity to traffic in various genres as Stone and Hill play different versions of themselves in everything from a Coen Brothersesque crime story to a Lord of the Rings-like fantasy world.