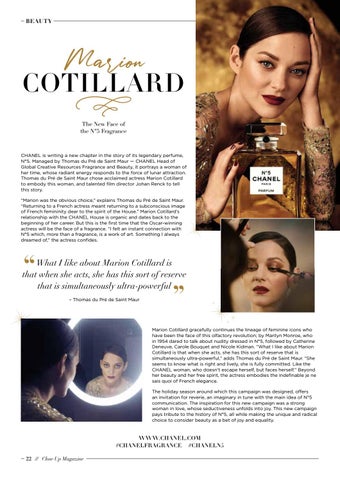 COTILLARD The New Face of the N°5 Fragrance

CHANEL is writing a new chapter in the story of its legendary perfume, N°5. Managed by Thomas du Pré de Saint Maur — CHANEL Head of Global Creative Resources Fragrance and Beauty, it portrays a woman of her time, whose radiant energy responds to the force of lunar attraction. Thomas du Pré de Saint Maur chose acclaimed actress Marion Cotillard to embody this woman, and talented film director Johan Renck to tell this story. “Marion was the obvious choice,” explains Thomas du Pré de Saint Maur. “Returning to a French actress meant returning to a subconscious image of French femininity dear to the spirit of the House.” Marion Cotillard’s relationship with the CHANEL House is organic and dates back to the beginning of her career. But this is the first time that the Oscar-winning actress will be the face of a fragrance. “I felt an instant connection with N°5 which, more than a fragrance, is a work of art. Something I always dreamed of,” the actress confides.

What I like about Marion Cotillard is that when she acts, she has this sort of reserve that is simultaneously ultra-powerful – Thomas du Pré de Saint Maur

Marion Cotillard gracefully continues the lineage of feminine icons who have been the face of this olfactory revolution; by Marilyn Monroe, who in 1954 dared to talk about nudity dressed in N°5, followed by Catherine Deneuve, Carole Bouquet and Nicole Kidman. “What I like about Marion Cotillard is that when she acts, she has this sort of reserve that is simultaneously ultra-powerful,” adds Thomas du Pré de Saint Maur. “She seems to know what is right and lively, she is fully committed. Like the CHANEL woman, who doesn’t escape herself, but faces herself.” Beyond her beauty and her free spirit, the actress embodies the indefinable je ne sais quoi of French elegance. The holiday season around which this campaign was designed, offers an invitation for reverie, an imaginary in tune with the main idea of N°5 communication. The inspiration for this new campaign was a strong woman in love, whose seductiveness unfolds into joy. This new campaign pays tribute to the history of N°5, all while making the unique and radical choice to consider beauty as a bet of joy and equality.