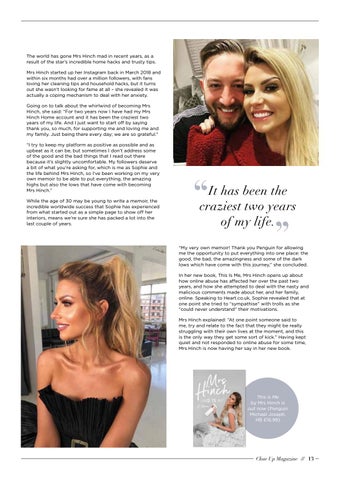 The world has gone Mrs Hinch mad in recent years, as a result of the star’s incredible home hacks and trusty tips. Mrs Hinch started up her Instagram back in March 2018 and within six months had over a million followers, with fans loving her cleaning tips and household hacks, but it turns out she wasn’t looking for fame at all – she revealed it was actually a coping mechanism to deal with her anxiety. Going on to talk about the whirlwind of becoming Mrs Hinch, she said: “For two years now I have had my Mrs Hinch Home account and it has been the craziest two years of my life. And I just want to start off by saying thank you, so much, for supporting me and loving me and my family. Just being there every day; we are so grateful.” “I try to keep my platform as positive as possible and as upbeat as it can be, but sometimes I don’t address some of the good and the bad things that I read out there because it’s slightly uncomfortable. My followers deserve a bit of what you’re asking for, which is me as Sophie and the life behind Mrs Hinch, so I’ve been working on my very own memoir to be able to put everything, the amazing highs but also the lows that have come with becoming Mrs Hinch.” While the age of 30 may be young to write a memoir, the incredible worldwide success that Sophie has experienced from what started out as a simple page to show off her interiors, means we’re sure she has packed a lot into the last couple of years.

It has been the craziest two years of my life. “My very own memoir! Thank you Penguin for allowing me the opportunity to put everything into one place: the good, the bad, the amazingness and some of the dark lows which have come with this journey,” she concluded. In her new book, This Is Me, Mrs Hinch opens up about how online abuse has affected her over the past two years, and how she attempted to deal with the nasty and malicious comments made about her, and her family, online. Speaking to Heart.co.uk, Sophie revealed that at one point she tried to “sympathise” with trolls as she “could never understand” their motivations. Mrs Hinch explained: “At one point someone said to me, try and relate to the fact that they might be really struggling with their own lives at the moment, and this is the only way they get some sort of kick.” Having kept quiet and not responded to online abuse for some time, Mrs Hinch is now having her say in her new book.