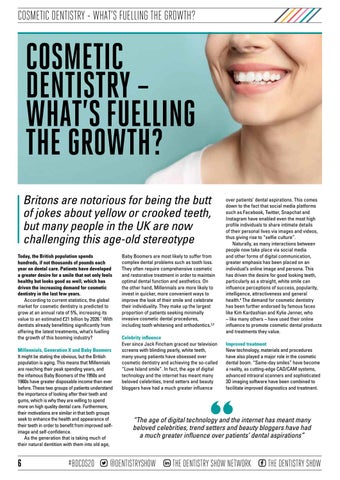 COSMETIC DENTISTRY – WHAT’S FUELLING THE GROWTH? Britons are notorious for being the butt of jokes about yellow or crooked teeth, but many people in the UK are now challenging this age-old stereotype Today, the British population spends hundreds, if not thousands of pounds each year on dental care. Patients have developed a greater desire for a smile that not only feels healthy but looks good as well, which has driven the increasing demand for cosmetic dentistry in the last few years. According to current statistics, the global market for cosmetic dentistry is predicted to grow at an annual rate of 5%, increasing its value to an estimated £21 billion by 2026.1 With dentists already benefitting significantly from offering the latest treatments, what’s fuelling the growth of this booming industry? Millennials, Generation X and Baby Boomers It might be stating the obvious, but the British population is aging. This means that Millennials are reaching their peak spending years, and the infamous Baby Boomers of the 1950s and 1960s have greater disposable income than ever before. These two groups of patients understand the importance of looking after their teeth and gums, which is why they are willing to spend more on high quality dental care. Furthermore, their motivations are similar in that both groups seek to enhance the health and appearance of their teeth in order to benefit from improved selfimage and self-confidence. As the generation that is taking much of their natural dentition with them into old age,

Baby Boomers are most likely to suffer from complex dental problems such as tooth loss. They often require comprehensive cosmetic and restorative treatment in order to maintain optimal dental function and aesthetics. On the other hand, Millennials are more likely to invest in quicker, more convenient ways to improve the look of their smile and celebrate their individuality. They make up the largest proportion of patients seeking minimally invasive cosmetic dental procedures, including tooth whitening and orthodontics.2,3 Celebrity influence Ever since Jack Fincham graced our television screens with blinding pearly, white teeth, many young patients have obsessed over cosmetic dentistry and achieving the so-called “Love Island smile”. In fact, the age of digital technology and the internet has meant many beloved celebrities, trend setters and beauty bloggers have had a much greater influence

over patients’ dental aspirations. This comes down to the fact that social media platforms such as Facebook, Twitter, Snapchat and Instagram have enabled even the most high profile individuals to share intimate details of their personal lives via images and videos, thus giving rise to “selfie culture”. Naturally, as many interactions between people now take place via social media and other forms of digital communication, greater emphasis has been placed on an individual’s online image and persona. This has driven the desire for good looking teeth, particularly as a straight, white smile can influence perceptions of success, popularity, intelligence, attractiveness and general health.4 The demand for cosmetic dentistry has been further endorsed by famous faces like Kim Kardashian and Kylie Jenner, who – like many others – have used their online influence to promote cosmetic dental products and treatments they value. Improved treatment New technology, materials and procedures have also played a major role in the cosmetic dental boom. “Same-day smiles” have become a reality, as cutting-edge CAD/CAM systems, advanced intraoral scanners and sophisticated 3D imaging software have been combined to facilitate improved diagnostics and treatment.

“The age of digital technology and the internet has meant many beloved celebrities, trend setters and beauty bloggers have had a much greater influence over patients’ dental aspirations” 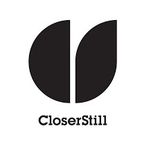