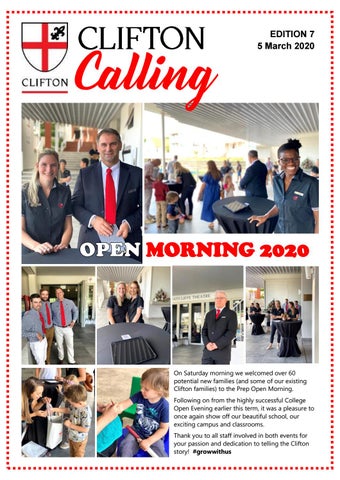 On Saturday morning we welcomed over 60 potential new families (and some of our existing Clifton families) to the Prep Open Morning. Following on from the highly successful College Open Evening earlier this term, it was a pleasure to once again show off our beautiful school, our exciting campus and classrooms. Thank you to all staff involved in both events for your passion and dedication to telling the Clifton story! #growwithus

Mrs Megan de Beyer launched her new book “How to Raise a Man: The modern mother’s guide to parenting her teenage son” at a book launch in the Sutcliffe Theatre on Monday night. The launch took the form of an interview with Jane Linley-Thomas of East Coast Radio, and whilst the interview, and Megan’s responses were aimed at mothers, there was certainly much that was useful for the dads in the audience – even dads of “ex-teenage” sons like myself! Much of the advice given by Megan could be classified as good common sense mixed with experience and a career of researching and presenting on this topic, as well as her training as a psychologist. Without wanting to rehash the evening, some of the useful take-outs for me included: •

Good conversations with our sons depend on good relationships – which take time - listening, availability and care.

Discuss one subject matter at a time!

We need to look at ourselves as parents (she spoke specifically about mothers), and understand ourselves – the wisdom is with us.

Withstand the discomfort of setting boundaries and love him enough to enforce those boundaries.

Megan spoke about some common mistakes we make as parents: •

being over-protective, not letting our sons make mistakes or be accountable for their mistakes, and giving credit when it’s not due;

Not understanding his stage of development;

Handling anger or aggression (which is often due to the testosterone explosion he is experiencing, or is a defense mechanism, perhaps triggered by anxiety) with calmness and boundaries;

She also discussed “conscious parenting”, mindfulness, the use of grounding exercises like breathing (which she did with the College boys in Assembly), screen time and experimentation with alcohol. Megan recommended a “social media detox time”, when all devices are switched off as a family - even switching off the Wi-Fi at a set time each night! Listening to the conversation between Megan and Jane, and the points that Megan was making, reminded me of a conversation I had with a parent on the side of the cricket field this summer. After the usual pleasantries and chat, he asked whether I minded sharing with him my philosophy of education, and what we as a school are aiming for with our boys. A good question, which could take a while to explain! But in a nutshell, my answer went something like this: In addition to the so-called ‘basics’, which might be summed up as good academics leading to a decent matric result, involvement in a co-curricular programme, taking

advantage of the many opportunities on offer at Clifton, preparing him for his next life stage as well as having a positive overall school experience, I believe that we as a school have a huge role in helping prepare the young boy or teenager for manhood. As such we work with the parent and to some extent the community – but we need to be conscious of what impact we have as a school on what sort of men our boys will be at the age of 40. This is why I am so passionate about the education of character, about teaching and showing boys the value of persistence, self-regulation, “showing up in the world” (to quote Megan), being accountable for ones’ actions, demonstrating the importance of manners, respect and values, and why having meaning in one’s life that goes beyond one’s own self-interest is so important.

According to Dr Phil Cummins of the CIRCLE group, in his seminal research project on Character Education in 21st Century boys’ schools, “A good school focuses on the whole education of the whole person, and as such, character is the whole work of a school. Character is why we “do” school”. Finally, and as I mentioned to Megan after her talk, we must never forget the inherent goodness of boys, and why we love boys, and love teaching boys! Warm regards

As I said, this could take a while to unpack, given all the good things we hope to achieve, and indeed do DAVE KNOWLES EXECUTIVE HEADMASTER achieve here at Clifton.

Meander On Saturday Messrs Knowles, Bresler and Mezher will be up at Michaelhouse with Ms King for the hockey and rugby fixtures. Messrs Brown, Ravenscroft and Boniaszczuk will be at the Dads and Lads and the internal rugby trials at the Whitehead Oval. Mrs Achmad will be at the Grade R assessment morning.

Congratulates The U15A water polo team that won the Dallas Hutton Tournament hosted by Northwood. They played some great polo, winning all their matches! They beat Westville and Maritzburg College then DHS in the quarter final. Michaelhouse were their opposition in the semi final and they beat Grey College 3-2 in the final. Excellent stuff, gents!

The Dusi Canoe Marathon took place from 27 - 29 February and Clifton was represented by 3 college gents. The results were as follows: Jarryd Walker and Mlungisi Hlongwane (from Lambethe Canoe Club) placed 43rd in K2 and 4th U18. Ben and Mr Maehler were 73rd in K2 and 1st father/son pair. Rory and Mr Steele placed 127th in K2. To put these results into context, there were 362 finishers of the Dusi this year and all three Clifton gents finished well within the top half of the field. Jarrydâ&#x20AC;&#x2122;s result is even more remarkable. After day 1 they were in 8th position in the U18 category and 70th overall. On day 2 they moved up 21 places overall and into 4th in the U18 category. On day 3 they moved up a further 6 positions overall to finish 43rd and in doing so, finished 20 minutes clear of the 5th placed U18 team and 37 minutes behind the 3rd. The U18 age group was very competitive this year with the top 3 boats within 10 minutes of each other after day 1. Congratulations, gents! (Left to right): Mr Brad Neal, Ben Maehler, Jarryd Walker and Rory Steele.

Well done to the Clifton 1st basketball team and coaches for their exciting performance at the recent St Johnâ&#x20AC;&#x2122;s Basketball Festival. Click on the link below to read the article on www.KZN10.com Great stuff, team Clifton! https://www.facebook.com/ KZN10com/

Congrats to the following Grade 5 boys who have been selected for the Durban Central U11 Cricket Teams to take part in the KZN Cricket Trials. Congratulations not only to these cricketers but also to the coaches on their appointments. Bottom from left to right: Muhammed Malek, Ben Wilson, Muhammad Yusuf Mahomed and Mr Heino Beneke (Coach: Durban Central, KZN U11 manager) Top left to right: Muhammad Asmal, Evan Murray, Mr Keegan Hezlett (Coach: Durban Central), Matthew Gorrie and Rivan Moodley. Congratulations gents!

The Grade 5 Eco Warriors tested their solar ovens that they made by making ‘s'mores’ in Clubs! Yum!

BELOW: As part of our community outreach programme, some of our boys visited the Denis Hurley Centre to drop off various donations from our Clifton parents. Thank you for all you continue to do in reaching out to our communities, gents.

Esports (also known as electronic sports, e-sports, or eSports) is a form of sport competition using video games.[1] Esports often takes the form of organized, multiplayer video game competitions, particularly between professional players, individually or as teams. Although organized competitions have long been a part of video game culture, these were largely between amateurs until the late 2000s, when participation by professional gamers and spectatorship in these events through live streaming saw a large surge in popularity.[ The most common video game genres associated with esports are multiplayer online battle arena (MOBA), first-person shooter (FPS), fighting, card games, battle royales, and real-time strategy (RTS). Popular esport franchises include League of Legends, Dota, Counter-Strike, Overwatch, Super Smash Bros., and StarCraft, among many others. (From Wikipedia)

The Grade 11 boys are currently working on the 6 Degree Shift programme where they are exploring their way of thinking, connecting and engaging with others. “It is said that every person on the planet is a maximum of 6 connections away from every other person on the planet. This is thrilling! But the truth is, we have never been more disconnected. We are struggling more than ever with issues like patriarchy, racism, sexism, leadership, hierarchy, partnership, ethics, values and culture – all aspects of human connection.

The greatest challenge of our modern time is to find ways to relate and interact deeply and sincerely in an ultra-connected world in which we have never been more fractured and distant.” - www.6degreeshift.com

BELOW: The Prep 1st XI took on the touring St David’s Prep team in a 35 over day/night encounter. Winning the toss, St David’s put Clifton in to bat. With Joshua van Biljon and Jayden Roux at the top of the order, our boys got off to a good start with an opening stand of 83 runs before van Biljon lost his wicket in the 15th over. Roux was dismissed for a very well played 60. Captain Tim Saulez continued this season's impressive form and, together with support from Rendani Nonge (18) and Keegan De Jager (24) in the middle order, took the score to 250 for 4 off 35 overs. Tim finished unbeaten with another commanding 71 runs. St David’s got off to a rocky start losing 4 quick wickets, but to their credit their middle and lower order fought back commendably. Whilst they were always behind the rate, they really put on an impressive fight to eventually end up on 218 for 9 in their 35 overs. Pick of the Clifton bowlers was Simon Hill with 3 for 35 helping our Clifton Prep 1st XI to another well-deserved victory. Well done, lads!

A reminder that the Clifton Shop is open every weekday from 07h15 - 10h30. Besides pre-loved and new uniform items, Mrs Jackie Psannis also stocks a range of supporters gear. The shop is at the Barry Richards Pavilion and is easily accessed from Innes Road. For your convenience, you may also shop online at: www.cliftonshop.co.za

HOUSE SITTING/BABY SITTING Please call Amy Mezher on 064 687 5934 or email: amymez6@gmail.com if you are looking for a reliable House Sitter or Baby Sitter. CHILD CARE Tersia Brenna has eighteen years of experience in supervising and teaching children from 3 months olds to 5year-olds. She also has experience with autistic and ADHD children. She is available to au pair, assist with homework and holiday care Monday to Friday and weekends from the 15 December onwards. Please contact her on 063 535 1952. HOUSE TO LET Beautiful La Lucia home to let, available from 1 April 2020. Features include: 5 bedrooms, sea views, 2 lounges, study, aircons, double garage, staff accommodation, 3 bathrooms, lots of offroad parking, garden services and security Please contact, Robyn on 0823372047 ____________________________________________ ABOUT CLIFTON CLASSIFIEDS Clifton Classified advertising is open to current parents and staff of Clifton. The cost per advert is R100, which will be debited to your sonâ&#x20AC;&#x2122;s school account. For bookings, email: marketing@cliftonschool.co.za

A reminder to ALL Clifton Old Boys - Prep and College - to please make sure we have your contact details. Where are you? What have you been up to? Weâ&#x20AC;&#x2122;d love to keep in touch! Email: cobweb@cliftonschool.co.za Edition 7 of The Clifton Calling

A weekly newsletter from Clifton School in Durban, South Africa.

Edition 7 of The Clifton Calling

A weekly newsletter from Clifton School in Durban, South Africa.