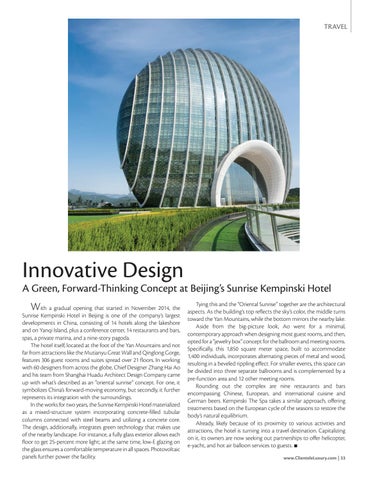 ith a gradual opening that started in November 2014, the Sunrise Kempinski Hotel in Beijing is one of the company’s largest developments in China, consisting of 14 hotels along the lakeshore and on Yanqi Island, plus a conference center, 14 restaurants and bars, spas, a private marina, and a nine-story pagoda. The hotel itself, located at the foot of the Yan Mountains and not far from attractions like the Mutianyu Great Wall and Qinglong Gorge, features 306 guest rooms and suites spread over 21 floors. In working with 60 designers from across the globe, Chief Designer Zhang Hai Ao and his team from Shanghai Huadu Architect Design Company came up with what’s described as an “oriental sunrise” concept. For one, it symbolizes China’s forward-moving economy, but secondly, it further represents its integration with the surroundings. In the works for two years, the Sunrise Kempinski Hotel materialized as a mixed-structure system incorporating concrete-filled tubular columns connected with steel beams and utilizing a concrete core. The design, additionally, integrates green technology that makes use of the nearby landscape. For instance, a fully glass exterior allows each floor to get 25-percent more light; at the same time, low-E glazing on the glass ensures a comfortable temperature in all spaces. Photovoltaic panels further power the facility.

Tying this and the “Oriental Sunrise” together are the architectural aspects. As the building’s top reflects the sky’s color, the middle turns toward the Yan Mountains, while the bottom mirrors the nearby lake. Aside from the big-picture look, Ao went for a minimal, contemporary approach when designing most guest rooms, and then, opted for a “jewelry box” concept for the ballroom and meeting rooms. Specifically, this 1,850 square meter space, built to accommodate 1,400 individuals, incorporates alternating pieces of metal and wood, resulting in a beveled rippling effect. For smaller events, this space can be divided into three separate ballrooms and is complemented by a pre-function area and 12 other meeting rooms. Rounding out the complex are nine restaurants and bars encompassing Chinese, European, and international cuisine and German beers. Kempinski The Spa takes a similar approach, offering treatments based on the European cycle of the seasons to restore the body’s natural equilibrium. Already, likely because of its proximity to various activities and attractions, the hotel is turning into a travel destination. Capitalizing on it, its owners are now seeking out partnerships to offer helicopter, e-yacht, and hot air balloon services to guests. ■ www.ClienteleLuxury.com | 33