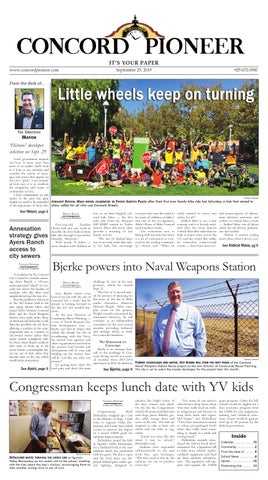 ‘Historic’ developer selection on Sept. 29 Local government impacts our lives in more ways than most of us realize. Each week as I look at my calendar and consider the variety of meetings and issues that appear on the city’s “plate” I am reminded how easy it is to overlook the complexity and scope of community service. I have commented on this Tamara Steiner matter in the past, but quite frankly we need to be reminded JUBILANT KIDICAL MASS RIDERS CELEBRATED IN TODOS SANTOS PLAZA after their first ever family bike ride last Saturday, a trek that aimed to of the importance of those who stress safety for all who use Concord Streets.

A resolution by the Concord City Council to consider annexing Ayers Ranch, a 190-acre unincorporated “island” in Concord, has raised the hackles of residents who like their rural neighborhood just the way it is. But, the problem is that most of the 300 homes built in the area along Myrtle Drive and Laurel Drive between Concord Blvd. and the Naval Weapons Station, have septic tanks. Many of them are old and ready to fail. State law prohibits the city from allowing a resident in the unincorporated area to connect to city-owned sewers unless their septic system completely fails. So, those Ayers Ranch residents who want to hook up to the sewer before a catastrophic failure are out of luck unless they become part of the city, which would mean annexation.

Five-year-old Enedina Olvera had just one word to describe the first Kidical Mass bike ride through Concord last Saturday: “Awesome.” With nearly 70 riders — most families with children in

tow or on their brightly colored kids bikes — the five mile ride from the Pleasant Hill BART station to Todos Santos Plaza did more than provide a morning of fun family activity. “The aim of Kidical Mass was to not only teach bike safety for kids, but encourage

everyone who uses the roads to be aware of children on bikes,” said one of the co-organizers, Adele Olvera of Bike Concord (and Enedina’s mom). “I’m somewhat new to biking with my kids, but there is a lot of excitement in Concord in the cycling community,” Olvera said. “What we

really wanted to stress was safety for all.” Kidical Mass is not a new concept, and it is loosely modeled after the more famous Critical Mass bike rides that are held in major cities across the U.S. and the world. But unlike its somewhat controversial cousin — there have been sev-

eral recent reports of altercations between motorists and cyclists at Critical Mass events — Kidical Mass was all about safety for all; drivers, pedestrians and cyclists. “Before I started cycling more often, when I drove a car,

Guy Bjerke hasn’t even been in his job with the city of Concord for a week, but he already is looking forward to the day he’s not needed anymore. As the new Director of Community Reuse Planning — a sort of Naval Weapons Station development czar — Bjerke says that he hopes that within the decade his job of coordinating with the Navy, the myriad state agencies and other organizations involved in the massive land transfer and development will be over, and building up the former base will be “just like any other city project.” It’s getting there that’s the See Ayers, page 9 hard part, and that’s the main

challenge he sees in his new position, which he started Sept. 21. The City of Concord started the process of planning for the reuse of the site in 2006, under Executive Director Michael Wright. After nineplus years on the project, Wright recently announced his retirement. However, he will continue as an independent consultant for the next several months, providing technical and strategic advice to make for a smooth transition.

NO STRANGER TO CONCORD Bjerke is no stranger himself to the workings of Concord, having served as a council member from 2007-2010 and mayor in 2010. In addition, FORMER

GUY BJERKE WILL STEER THE NEXT PHASE of the Concord Naval Weapons Station Reuse project as the new Director of Community Reuse Planning. The city is set to select the master developer for the project later this month.

Congressman Mark DeSaulnier wrapped up a visit to the District on Sept. 3 with visits to Ygnacio Valley Elementary and Loma Vista Adult Center to measure the impact of a recent USDA grant for cafeteria improvements. DeSaulnier joined the kids at Ygnacio Valley Elementary for a firsthand look at the new cafeteria lunch line purchased Tamara Steiner with the grant. The line is open DESAULNIER MOVES THROUGH THE LUNCH LINE at Ygnacio and the food items are disValley Elementary on his recent visit to the school, chatting played behind glass under spewith the kids about the day’s choices, encouraging them to cial lighting designed to take another orange slice or ear of corn.

enhance the bright colors of the day’s entrees and salads. On the day the Congressman visited, the menu included mini corn dogs, pasta Alfredo, garden salad, orange slices and corn on the cob. The kids are required to take at least one entrée and one fruit or vegetable. “Lunch was never like this when I was in school,” DeSaulnier said. Students have responded enthusiastically to the new food line, says Kissinger. “The first week it was in, the cafeteria ran out of produce every day.”

“Too many of our nation’s schools have deep fryers when what they really need are walkin refrigerators and freezers to keep fresh fruits and vegetables longer,” says DeSaulnier. “They have microwaves meant to reheat pre-packaged foods when they really need something as simple as a knife and cutting board.” DeSaulnier recently introduced the School Food Modernization Act, a bipartisan bill to help more schools replace outdated equipment and beef up their cafeteria infrastructure. The legislation will support and expand the USDA

grant program. Under the bill, schools would be eligible for a loan assistance program from the USDA for new equipment, training and technical assistance. Loans would be guaranteed up to 80 percent by the federal government.