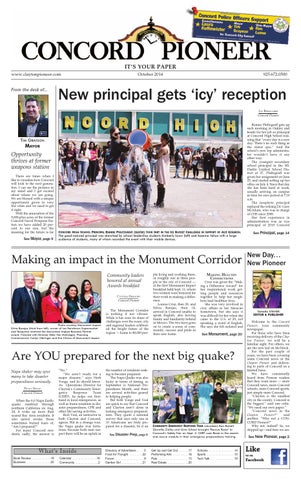 Rianne Pfaltzgraff gets up each morning in Oakley and heads for her job as principal at Concord High School realizing that “every day is a new day. There’s no such thing as the status quo.” And the school’s new top administrator wouldn’t have it any other way. The youngest secondary school principal in the Mt. Diablo Unified School District at 37, Pfaltzgraff was given her assignment on June 25, and started setting up her office on July 4. Since that day she has been hard at work, usually arriving on campus in time for zero period at 7:10 a.m. The neophyte principal replaced the retiring Dr. Gary McAdam, who was in charge of CHS since 2008. Her first experience in administration was as vice principal of 2010 Concord

Opportunity thrives at former weapons station There are times when I like to visualize how Concord will look to the next generation. I can see the pictures in my mind and I get excited about where we are going. We are blessed with a unique opportunity given to very few cities and we need to get it right. With the annexation of the 5,000-plus acres of the former Concord Naval Weapons Station we have added 20 percent to our size, but the meaning for the future is far

CONCORD HIGH SCHOOL PRINCIPAL RIANNE PFALTZGRAFF (SEATED) TOOK PART IN THE ICE BUCKET CHALLENGE IN SUPPORT OF ALS RESEARCH. The good-natured principal was drenched by school leadership students Kimberly Snow (left) and Azeema Yahya with a large audience of students, many of whom recorded the event with their mobile devices.

The Monument Corridor is nothing if not vibrant. While it has seen its share of challenges over the years, city and regional leaders celebrated the bright future of the region — home to 40,000 peo-

ple living and working there, or roughly one in three people in the city of Concord — at the first Monument Impact breakfast held Sept. 11, where two women were honored for their work in making a difference. Lorena Cruz, then 29, and Silvia Barajas, then 14, arrived in Concord unable to speak English, also leaving family and familiarity behind in Mexico. The two have gone on to create a sense of community, success and pride in their new home.

When the 6.0 Napa Earthquake rumbled through northern California on Aug. 24, it woke up more than scared Bay Area residents. It also jarred awake those sometimes buried fears of, “Am I prepared?” For many Concord residents, sadly, the answer is

“No.” “We aren’t ready for a major disaster,” says Herb Yonge, and he should know. As Operations Director for Clayton’s Community Emergency Response Team (CERT), he helps out firsthand in local emergencies, as well as trains residents in disaster preparedness, CPR and other life-saving activities. Rich Veal, an instructor in both Clayton and Concord, agrees. But in a strange way, the Napa quake was fortuitous, because both men suspect there will be an uptick in

the number of residents seeking to become prepared. The Napa Quake was also lucky in terms of timing, as September is National Preparedness Month, and there are several activities geared to helping people. But both Yonge and Veal are quick to say that Concord and Clayton aren’t alone in lacking emergency preparedness. They quote a national survey that says only one in 10 Americans are truly prepared for a disaster, be it an See Disaster Prep, page 9

Cruz was given the “Making a Difference Award” for her inspirational work getting people and resources together to help her neighbors lead healthier lives. She was very involved in civic affairs in her Mexican hometown, but she says it was difficult for her when she came to the U.S. at 29, not speaking a word of English. She says she felt isolated and

Are YOU prepared for the next big quake? Napa shaker may spur many to take disaster preparedness seriously.