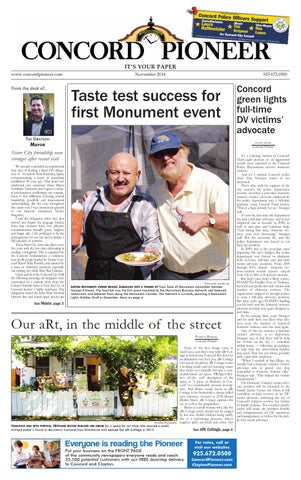 Sister City friendship even stronger after recent visit We recently concluded an inspirational four days of hosting a Sister City delegation of 50 visitors from Kitakami, Japan, commemorating a bond of friendship established 40 years ago. That bond was reinforced and cemented when Mayor Toshihiko Takahashi and I signed a mutual proclamation reaffirming out commitment to this affiliation, fostering mutual friendship, goodwill, and international understanding. (By the way, throughout this entire visit I was enormously grateful to our fantastic interpreter Naoko Inoguchi.) I met the delegation when they first arrived and despite the language barrier, from that moment there was effective communication, friendly gazes, laughter and happy talk. I felt privileged to be the spokesperson for our city and to initiate a full schedule of activities. These Sister City visits take place every five years with the two cities alternating in sending a delegation. This is organized by the Concord Ambassadors, a volunteer, non-profit group headed by former Concord Mayor Mike Pastrick, and assisted by a team of dedicated residents, especially our retiring city clerk, Mary Rae Lehman. Upon arrival at the Concord City Hall the following morning the delegates were entertained by a student choir from the Calvary Christian School. Next, the City of Concord hosted a buffet luncheon. The delegation visited the John Muir National Historic Site and found many photo-ops

SAPORE RISTORANTE OWNER MIGUEL ZARAGOZA GETS A THUMBS UP from Taste of Monument committee member George Fulmore. The food fair was the first event mounted by the Monument Business Network and featured restaurants and bakeries from along the Monument Corridor. The Network is currently planning a Monument Lights Holiday Stroll in December. More on page 4.

Our aRt, in the middle of the street PATRICIA ROMERO Concord Pioneer

Some of the best things come in small sizes, and that’s true with aRt Cottage in downtown Concord. But don’t let its diminutive size fool you, aRt Cottage isn’t just an art gallery. aRt Cottage is also a working studio and arts learning center that wants to eventually become a community-based art space. FROgard Butler’s off-the- cuff description of the space as “a piece of Berkeley in Concord” is a considerably accurate description. And Butler would know, as aRt Cottage is her brainchild; a dream willed into existence. Located at 2238 Mount Diablo Street, aRt Cottage captures the eye as well as the imagination. Butler is a small woman who, like the aRt Cottage itself, should not be judged by her size. Stylish without being stuffy, she is a welcoming presence whose laughter spills out freely and often. Her

TENACIOUS AND WITH PURPOSE, FROGARD BUTLER REALIZED HER DREAM for a space for art when she rescued a small orchard picker’s house in downtown Concord from foreclosure and opened the aRt Cottage in 2012.

It’s a sobering statistic in Concord: Thirty-eight percent of all aggravated assault cases reported to the Concord Police Department involve domestic violence. And it’s a statistic Concord police chief Guy Swanger wants to see decreased. That’s why, with the support of the city council, the police department recently stretched a part-time domestic violence victims’ advocate employed by the police department into a full-time position, using General Fund money. “This is a huge priority for us,” Swanger said. It’s not the first time the department has had a full-time advocate, and in fact employed one as recently as 2008, as well as part-time and volunteer help. “And during that time, domestic violence cases were decreasing,” Swanger said. But the recession hit, and the police department was forced to cut back the position. In 2009, due to the economic crisis impacting the city’s budget, the police department was forced to eliminate both in-house full-time and part-time victim advocate positions. From 2009 through 2011, annual domestic violence-related assault reports surged from 426 to 684, a 60 percent increase. But help came from a likely source, STAND! For Families Free of Violence, the local non-profit that aids victims and families of domestic violence. The organization chipped in enough money to keep a full-time advocacy position. But three years ago, STAND!’s funding got hit hard, and the domestic violence advocate position was again dropped to part-time. In the ensuing three years, Swanger and his staff have not liked what they have seen: the number of reported domestic violence cases has risen again. One of the key reasons a full-time victim’s advocate is so important, Swanger says, is that there will be help for victims on the day — sometime within hours — following an incident, to help with any intervention families may need. That was not always possible with a part-time employee. “When I worked in San Diego, we actually had a domestic violence victim’s advocate ride in patrol cars that responded to domestic violence calls,” Swanger said. “This helped the victims tremendously.” The Domestic Violence victim advocate position will be relocated to the Family Justice Center site where it will contribute in-kind services as an FJC victim advocate, anchoring the city of Concord’s support services for victims of family violence. The contract classification will make the position flexible and complementary for FJC operations and management, as well as for the public who needs advocacy.