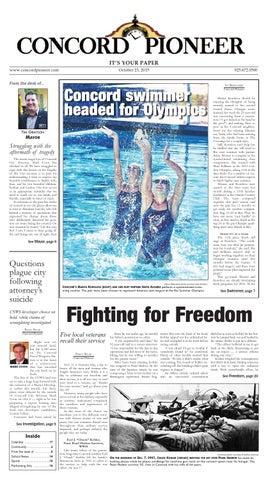 Struggling with the aftermath of tragedy

The recent tragic loss of Concord City Attorney Mark Coon has shocked us all. We have struggled to cope with this lesson on the fragility of life. Our recourse is to pray for understanding. I want to express my heartfelt condolences to Mark’s wife, June, and his two beautiful children, Nathan and Lauren. Our loss serves as an appropriate reminder that we need to reach out to our family and friends, especially in times of need. In reference to the past few weeks of turmoil in our city please allow me to turn to Abraham Lincoln, who left behind a treasury of quotations that expressed his dismay about those who deliberately distorted his position on issues facing the country. On one occasion he stated, “I do the very best I can, I mean to keep going. If the end brings me out all right, then

Right now it’s just unused land, but the 2,300 acres on the Concord Naval Weapons Station is at the heart of a controversy MARK COON that has knocked the city back on its heels. The fate of the CNWS land was set to take a huge leap forward with the selection of a Master Developer earlier this month, but those plans were delayed by the suicide of Concord City Attorney Mark Coon on Oct. 6 — right as he was preparing a report looking into alleged wrongdoing by one of the final two developer candidates, Lennar Urban. Concerns had been raised by

CONCORD’S MARIYA KOROLEVA (RIGHT) AND HER DUET PARTNER ANITA ALVAREZ perform a synchronized swimming routine. The pair have been chosen to represent America next August at the Rio Summer Olympics

Mariya Koroleva should be enjoying the afterglow of being recently named to her second United States Olympic team. Instead, last week the 25-year-old was recovering from a concussion (“I got kicked in the head in the pool”) and making fliers to post in her Concord neighborhood for her missing Siberian cat, Yarik, who had been missing from the family home in The Crossings for a couple days. Still, Koroleva can’t help but be thrilled that she will head to Rio next summer with partner Anita Alvarez to compete in the synchronized swimming duet competition. She teamed with Mary Killman at the 2012 London Olympics, taking 11th in the duet finals. For a number of reasons the Concord athlete expects to finish higher next summer. Alvarez and Koroleva were named as the duet team last month during a USA Synchro fundraiser at the Orinda Country Club. The team competed together this past season and now the pair has 11 months to get ready for synchro competition Aug. 15-20 in Rio. They do have one more “easy hurdle” to clear, as they need to finish in the top 24 at the pre-Olympic qualifying meet next March in Rio. GOOD FIT AS A TEAM The 11th place finish still nags at Koroleva. “The conditions were not ideal [in preparation for London],” she said. She and Killman weren’t able to begin working together on their Olympic routines until five months before the Games. “I also had surgery and there were political issues [that impacted the prep].” This go-round Alvarez and Koroleva are already developing fresh programs for 2016. At the

Nov. 11 is Veterans Day, a day to honor all the men and woman who fought America’s wars. While it is a day to celebrate our freedom and their service, it is all too easy to nod your head to a veteran, say “thanks for your service,” and go about your day off. However, many people who have never served in the military, especially in wartime, understand completely the sacrifices and experiences of these veterans. In this issue of the Pioneer, we introduce you to five different veterans with diverse stories of war and peace, but one common thread runs throughout: their military service impacted, and perhaps defined, the people they are today.

Since he was under age, he needed his father’s permission to enlist. “I was surprised he said okay,” the 92-year-old said in a recent interview. “I was responsible for the day-to-day operations and did most of the heavy lifting, but he was willing to sacrifice for the greater cause.” After Navy basic training, Kohler was assigned to Pearl Harbor. At the time of the Japanese attack, he was composing a letter to his mother on a Remington typewriter. Bomb frag-

ments flew into the back of his head, Kohler ripped out the unfinished letter and crumpled it in the trash before racing outside. “I was afraid I’d get in trouble if somebody found it,” he confessed. Plenty of other trouble awaited him outside. “At first I didn’t realize what was coming. The sound of bullets ricocheting off the buildings didn’t quite register as danger.” An officer outside ordered sailors into an uncovered construction

ditch,but as soon as Kohler hit the bottom he jumped back out and headed to the ammo shelter to put up a defense. “The officer hollered at me to get back in the ditch, threatening to put me on report — a serious offense during war time.” Kohler weighed the consequences but didn’t look back, finding someone with a key to open the ordnance shack. With considerable effort, he

Earl J. “Chuck” Kohler, Navy Pearl Harbor Survivor, WWII Like many others of his generation, long-time Concord resident Earl Fuhrman photo courtesy of Kohler archives J. “Chuck” Kohler left his family’s ON THE MORNING OF DEC. 7, 2941, CHUCK KOHLER (CIRCLED) WATCHES THE SKY OVER PEARL HARBOR for more atMinnesota farm in 1941 to enlist in tacking places while he places sandbags for machine gun nests on the connect apron near his hangar. The the service to help with the war Pearl Harbor survivor, 92, lives in Concord with his wife of 64 years. effort. He was 17.