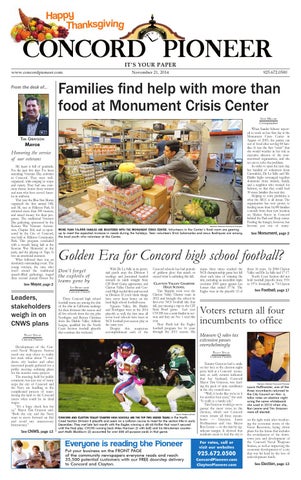 Honoring the service of our veterans My heart is full of gratitude. For the past few days I’ve been attending Veterans Day activities in Concord. They were wellorganized, wide-ranging in scope and variety. They had one common theme: honor those women and men who have served America in uniform. This year the Blue Star Moms organized the first annual 10K and 5K race at Hillcrest Park. It attracted more than 300 runners, and raised money for their programs. The traditional Veteran’s Day gathering, sponsored by the Korean War Veterans Association, Chapter 264, and co-sponsored by the City of Concord, was held at Hillcrest Community Park. This program concluded with a wreath being laid at the Korean War Memorial at the park, and the playing of Taps. It was an emotional moment. What followed then was an absolutely outstanding event. The young veterans, the ones who won’t attend the traditional speech-filled gatherings, staged their second annual Honor the

MORE THAN 16,000 FAMILIES ARE REGISTERED WITH THE MONUMENT CRISIS CENTER. Volunteers in the Center’s food room are gearing up to meet the expected increase in needs during the holidays. Teen volunteers Erick Salamanka and Jesus Rodriquez are among the local youth who volunteer at the Center.

Development of the Concord Naval Weapons Station eased one step closer to reality last week when about 75 residents, city leaders and other interested people gathered for a public meeting outlining plans for the massive reuse project. The meeting, held for public comment, was just one of many steps the city of Concord and the Navy are hurdling as the complicated process of transferring the land to the Concord enters what could be its final stages. “It’s a huge check box for us,” Mayor Tim Grayson said. “Both the city and the Navy want to move forward on this and avoid any unnecessary bureaucracy.”

When Sandra Scherer reported to work on her first day at the Monument Crisis Center in August of 2003, the pantry ran out of food after serving 84 families. It was the first “crisis” that she would weather in her role as executive director of the nowrenowned organization, and she set out to solve the problem. In order to open the next day, her handful of volunteers from Carondelet, De La Salle and Mt. Diablo highs scrounged together donations from friends, family, and a neighbor who worked for Safeway, so that they could feed 30 more families the next day. Helping to solve problems is what the MCC is all about. The organization has now grown to feeding more than 16,000 families a month from their new location on Market Street in Concord behind the Park and Shop center. Feeding the hungry, however, has become just one of many

Three Concord high school football teams are among the elite of the elite in California rankings for their divisions this season and all five schools from the city, plus Northgate and Berean Christian from the Diablo Valley Athletic League, qualified for the North Coast Section football playoffs that continue this weekend.

With De La Salle in its perennial perch atop the Division I seedings and presumed headed towards its ninth straight State CIF Bowl Game appearance and Clayton Valley Charter and Concord High seeded first and second in Division II you’d think things have never been better on the local high school football scene. Ygnacio Valley, Mt. Diablo and Northgate were in the 2014 playoffs as well, the first time all seven local schools have been in NCS football post-season play in the same year. Despite this auspicious accomplishment each of the

Concord schools has had periods of gridiron glory that match or exceed what is unfurling this fall.

CLAYTON VALLEY CHARTER HIGH SCHOOL Tim Murphy took over the Clayton Valley Charter team in 2012 and brought the school its first-ever NCS football title that fall, just missing a trip to the CIF State Bowl game. Last year CVCHS was a semi-finalist in section and they are No. 1 seed this year. Herc Pardi led the Eagles football program for 16 years through the 2011 season. His

teams three times reached the NCS championship game but fell short each time of winning the title, including an incredible triple overtime 2003 game against Las Lomas that ended 37-36. The Eagles were in the playoffs 12 of

CONCORD AND CLAYTON VALLEY CHARTER HIGH SCHOOLS ARE THE TOP TWO SEEDED TEAMS in the North Coast Section Division II playoffs and seem on a collision course to meet for the section title in early December. They met late last month with the Eagles winning a 48-40 thriller that wasn’t secured until the final play. CVCHS running back Miles Harrison (3 with ball) and his Minuteman counterpart Malik Blackburn (3) accounted for over 600 all-purpose yards in that game.

Tammy Grayson had a smile on her face at the election night party held at a Concord restaurant, as early returns indicated that her husband, Concord Mayor Tim Grayson, was leading the pack of nine candidates in the city council race. “Well, it looks like we’re in it for another four years,” she said. “It really is a family job.” Tim Grayson would go on to garner the most votes in the election, which saw Concord voters return all three incumbents — Grayson, Laura Hoffmeister and vice Mayor Ron Leone — to the dais by significant margin. It showed that residents seem to feel the city is

Laura Hoffmeister, one of the three incumbents returned to the City Council on Nov. 4, tallys votes on election night using the same whiteboard she used in 2010 when she, Ron Leone and Tim Grayson were all elected.