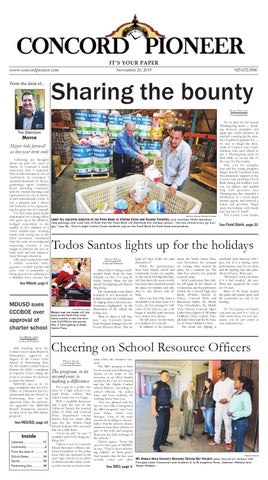 Sharing the bounty IT’S YOUR PAPER

Collecting my thoughts about my past two years as Mayor of Concord is more emotional than I expected. The overall sensation is one of satisfaction. In retrospect I attended hundreds of diverse gatherings, spent countless hours attending committee and city council meetings, and represented our city at national and international events. It was a pleasure and I always felt honored to be representing the great city of Concord. I’ve had some pretty heady Tamara Steiner/Clayton Pioneer experiences for a young fellow who grew up in the Midwest, LARRY SLY, EXECUTIVE DIRECTOR OF THE FOOD BANK OF CONTRA COSTA AND SOLANO COUNTIES, and volunteer Willie Mendoza wedged somewhere in the help package and crate tons of food that the Food Bank will distribute this holiday season. “No one should every go hunmiddle of five children of a gry,” says Sly. One in eight Contra Costa residents rely on the Food Bank for fresh food and produce. lower middle-class working family with strong ties to the labor movement. Inculcated with the value of revering and respecting seniors, I was taught to embrace the joys of hard work and self improvement through education. hope El Nino holds off until ances, the Todos Santos BusiPEGGY SPEAR Like most young boys with December 6.” ness Association has arranged a similar economic backConcord Pioneer While the performances for carriage rides around the ground I worked myriad odd Santa Claus is taking a much- from local church, school and plaza, for a nominal fee. The jobs. One I remember as needed break from his busy community events are popular, rides have proven very popular being special was caddying for schedule on Dec. 5 to stop by it’s the visit by The Big Man him- in recent years. a disabled Navy veteran. His KGO anchorman Dan AshTodos Santos Plaza for the self that draws the most crowds. See Mayor, page 6 annual Tree-lighting and Mayor’s Last years, lines stretched around ley will again be the Master of the plaza for families and chil- Ceremonies, and the performers Sing-along. The community event draws dren to take photos with St. include the Concord High Jazz Band, D’Ann’s School of hundreds if not thousands of Nick. Weiss says that while Santa is Dance, Concord Parks and holiday revelers for a celebration of singing, dance and music per- scheduled to be there from 4 to Recreation Ballet, the Monte formances, highlighted by the 6 p.m., she has arranged it with Vista Cheerleaders, the Diablo Rochelle Douglass illumination of the official city some of his elves to stay a bit Vista Chorus, Concord High’s RUDOLF AND THE OTHERS will stay holiday tree. longer if needed, until everyone Ladies First, Queen of All Saints back at the North Pole while Children’s Choir, Calvary Tem“Rain or shine, it will hap- has a chance for a photo. Santa catches a ride into town He will arrive via fire truck, ple Kids Choir and the St. Franpen,” says Concord’s Downwith CCCFPD for the annual cis of Assisi Children’s Choir. town Program Manager for City as is tradition in Concord. Dec. 5 Tree Lighting in Todos In addition to the performThe actual tree lighting is Events Florence Weiss. “But we Santos Plaza.

As we plan for the annual Thanksgiving meal — deciding between pumpkin and apple pie, sweet potatoes or mashed, counting up the number of guests to prepare for — it’s easy to forget the thousands of Contra Costa County residents who can’t afford to put a Thanksgiving meal on their table, or on any day of the year, for that matter. Take Lisa for example: Lisa and her young daughter, Angel, directly benefited from the community support of the Contra Costa and Solano Food Bank during the holidays. Lisa was on dialysis and needed help with groceries. Last Thanksgiving they attended a distribution at a Food Bank partner agency and received a turkey and groceries. Angel spent the holidays with family and “ate lots of food!” The Contra Costa Solano

Todos Santos lights up for the holidays

Still smarting from the Contra Costa County Board of Education’s approval in August of the Contra Costa School of Performing Arts, the Mt. Diablo Unified School District has filed a complaint in Superior Court asking the court to overturn the decision to grant the charter. MDUSD says in its 14page complaint that the CCC Office of Education had recommended that the School of Performing Arts not be approved when the petitioners appealed the MDUSD Board’s unanimous rejection on May 18 of the SPA charter proposal.

scheduled from between 6:45-7 p.m., but if it is raining, some performances may be cut short and the lighting may take place about 6:30 p.m., Weiss says. “We tend to work a bit faster if it is bad weather,” she says. Weiss has organized the event for 14 years. Many of the shops around the plaza will remain open, and the restaurants are sure to be bustling. The Tree Lighting and Mayor’s Sing-along runs from 4 to 7 p.m. at Todos Santos Plaza. For more information, visit the city’s website at www.cityofconcord.org.

The program, in its second year, is making a difference

For a guy in a police uniform at a high school, Concord Police Officer Ray Valeros looks way too happy. With a youthful demeanor and a grin the size of the Caldecott Tunnel, the married father of three and Concord Police Department veteran doesn’t look too much older than the Mt. Diablo High School students who surround him on a daily basis. “I love my job,” he says. “I wouldn’t want to be doing anything else.” Valeros is one of Concord’s School Resource Officers, uniformed members of the police force who are stationed at the city’s high schools in an effort to thwart juvenile crime, truancy and even act as a extra coun-

selor when the situation warrants. The SRO program is back for its second year following its demise in the midst of the recession, in an effort funded jointly by the City of Concord and the Mt. Diablo Unified School District. According to school officials, the police force and even students, it’s working better than ever. “I’m very pleased with the fact we were able to bring back the SRO program,” says Concord Police Chief Guy Swanger. “One of the main reasons it’s working so successfully is that the schools’ administrations treat these officers as part of the staff, and integrate them into the daily workings of the schools.” Valeros agrees. “From day one I’ve felt a part of MDHS,” he says. “They’ve been welcoming, helpful…it’s been great.” Tamara Steiner And besides that, he has seen juvenile crime and other MT. DIABLO HIGH SCHOOL’S RESOURCE OFFICER RAY VALEROS jokes around on campus with Principal Liane Cismowski and students (L to R) Angelina Perez, Zebreon Wallace and