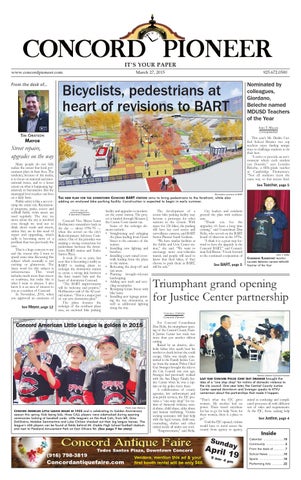 Bicyclists, pedestrians at heart of revisions to BART

This year’s Mt. Diablo Unified School District two top teachers enjoy finding unique ways to challenge students to do their best. “I strive to provide an environment where each student can flourish,” says Lourdes Beleche, a fifth-grade teacher at Cambridge Elementary. “Not all students learn the same way, so that means find-

Street repairs, upgrades on the way Many people do not fully realize the extent that local government plays in their lives. The tendency, because of the media, is to focus on national and international issues, and to a lesser extent on what is happening legislatively in Sacramento. But the municipal level touches our lives on a daily basis. Public safety is like a net covering the entire city. Recreational programs, parks, soccer and softball fields, swim meets are used regularly. The way we move about the city is involved even though we tend not to think about roads and streets, unless they are in dire need of repair and upgrading, which sadly is becoming more of a problem than was previously the case. That is a huge concern to me and the reason why I want to spend some time discussing this subject which normally is not exciting or glamorous. The fancy word for this subject is infrastructure. This word includes much more than streets or roadways, but today this is what I want to discuss. I also know it is an area of interest to you as a resident of Concord. In November, 2014, when you approved an extension of

THE NEW PLAN FOR THE DOWNTOWN CONCORD BART STATION aims to bring pedestrians to the forefront, while also adding an enclosed bike parking facility. Construction is expected to begin in early summer. PEGGY SPEAR

Concord Vice Mayor Laura Hoffmeister remembers back in the day — about 1994-’95 — when she served on the city’s Redevelopment Advisory Committee. One of the priorities was making a strong connection for pedestrians between the downtown BART station and Todos Santos Plaza. It took 20 or so years, but now that is becoming a reality as BART is making plans to redesign the downtown station to create a strong link between the busy transit hub and the heart of downtown Concord. “The BART improvements will be welcome and positive,” Hoffmeister said of the 42-yearold station. “This is a major part of our new downtown plan.” The plans features the redesign of the northern plaza area, an enclosed bike parking

facility and upgrades to modernize the entire station. The project is funded through Measure J, the Contra Costa transit tax. Some of the redesign elements include : • Straightening and enlarging the plaza leading from Grant Street to the entrance of the station. • Installing new lighting and benches. • Installing a new raised crosswalk leading from the plaza to the station. • Relocating the drop-off and taxi areas. • Planting drought-tolerant landscaping. • Adding new trash and recycling receptacles. • Restriping Grant Street with bike lanes. • Installing new signage pointing the way downtown, as well as additional lighting along the way.

The development of a secure bike parking facility may become a prototype for other stations in the system. With space for 126 bikes, the parking will have key card access and surveillance cameras, said BART Senior Planner Sarah Graham. “We have similar facilities at the Ashby and Civic Center station,” she said. “We want to encourage more non-vehicular transit, and people will need to know that their bikes, if they choose to park them at BART, will be safe.”

City leaders and residents greeted the plan with enthusiasm. “Thank you for the upgrades; it’s been a long time coming,” said Councilman Dan Helix, who served on the BART board of directors in the 1970s. “I think it is a great step forward to have the upgrade at the Concord BART,” said Councilman Edi Birsan. “I look forward to the continued cooperation of

CONCORD AMERICAN LITTLE LEAGUE BEGAN IN 1955 and is celebrating its Golden Anniversary season this spring. Kids being kids, three CALL players were sidetracked during opening ceremonies looking at baseball cards. Little leaguers on the Mud Cats, from left, Gino DaSilveira, Malekai Sammartino and Luke Chilson checked out their big league heroes. The league’s 400 players can be found at fields behind Mt. Diablo High School football stadium and next to Pixieland Amusement Park on East Olivera Rd. (See page 7 for story)

For Concord Councilman Dan Helix, the triumphant opening of the Central County Family Justice Center last week was more than just another ribbon cutting. Raised by an abusive, alcoholic father who nearly beat his mother to death before she could escape, Helix was deeply committed to the Family Justice Center from the minute Police Chief Guy Swanger brought the idea to the City Council one year ago. Swanger had previously worked with the San Diego Family Justice Center when he was a captain on the police force there. A collaboration of county agencies, law enforcement and non-profit services, the FJC provides a “one-stop shop” for victims of domestic violence, sexual abuse, child abuse, elder abuse and human trafficking. Victims seeking assistance will find help with the legal system, child care, counseling, shelter and other critical needs all under one roof. “Empowerment,” said Helix.

LAST YEAR CONCORD POLICE CHIEF GUY SWANGER brought the idea of a “one stop shop” for victims of domestic violence to the city council. One year later, the Central County Justice Center opened downtown and Swanger speaks to KTVU camerman about the partnerships that made it happen.

“That’s what the FJC gives women. My mother had no power. There wasn’t anywhere for her to go for help. Now, for these women, there is a place to go.” Until the FJC opened, victims would have to travel across the county from agency to agency,

Vendors, mention this ad & your first booth rental will be only $60.

mired in confusing and complicated processes all with different sets of rules and requirements. At the FJC, those seeking help