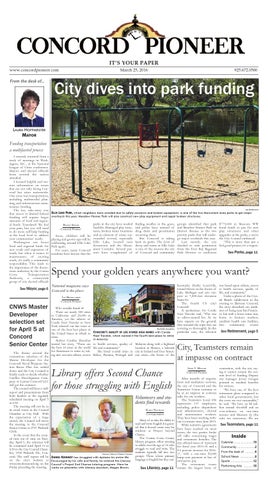 I recently returned from a week of meetings in Washington, D.C., at the National League of Cities conference. Mayors and elected officials from around the nation attended. I learned helpful and current information on issues that are not only facing Concord but cities nationwide. One issue was transportation, including multimodal planning and infrastructure maintenance funding. The key take-away was that access to limited federal funding will require larger amounts of local and regional funds. Translated: We feel your pain, but you will need to do more self-help funding at the local level to address your communities’ needs. Washington can boost local and regional funds for new roads and expansion of roads, but when it comes to maintenance of existing roads, it’s really a community responsibility. This leads to the importance of the discussions underway by the Contra Costa Transportation Authority, a countywide group of city elected officials

ELLIS LAKE PARK, which neighbors have avoided due to safety concerns and broken equipment, is one of the two Monument Area parks to get major overhauls this year. Meadow Homes Park will also construct new play equipment and repair broken structures. PEGGY SPEAR Concord Pioneer

Soon, children will be playing and grown-ups will be celebrating around Ellis Lake Park again. For years, many Concord residents have known that the

parks in the city have needed facelifts. Damaged play structures, broken water fountains and an element of crime surrounded several, especially Ellis Lake, located near downtown and the Monument Corridor. Several parents have complained of

finding needles in the grass, and police have warned of drug deals and prostitution occurring there. But Concord is taking back its parks. The level of decay and crime at Ellis Lake is one of the reasons the city of Concord and community

$775,000 in Measure WW bond funds to pay for new play structures and other upgrades at the parks, a move the City Council embraced. “This is more than just a feel-good project; it’s a respon-

Kentucky Derby Louisville, Grand Haven on the shores of Lake Michigan and arts outpost at 7,200-feet elevation Sante Fe. The fourth US city? Concord! A spokesman for Conde Nast Traveler said, “This was an editor-curated list. As we have experts on the ground, they research the topic they are covering so thoroughly. In this particular case, the selection

was based upon culture, access to health services, quality of life, and community.” Under a photo of the Crystal Ranch subdivision in the evening to illustrate Concord, the story described our attributes of being near San Francisco but with a lower crime rate, home to farmers markets, excellent health care facilities, free community events

contention, with the city saying it cannot sustain the current level of funding. Deputy city manager Jovan Grogan pointed to medical benefits for retirees. “We have one of the best retirement plans compared to other local governments, but the costs are not sustainable,” he said. “We have an $8 million annual shortfall and an over-reliance on one-time monies and Measure Q (the sales tax extension). We are

groups identified that park and Meadow Homes Park on Detroit Avenue as the two priority parks that will undergo major overhauls this year. Last month, the city decided to seek permission from the East Bay Regional Park District to reallocate

Who woulda thunk it? There are nearly 500 cities in California and 20,000 in America, yet the editors of Conde Nast Traveler in New York selected our fair town as Rochelle Douglass one of the four best places in C ONCORD’S QUALITY OF LIFE SCORED HIGH MARKS with Conde the United States in which to Nast Traveler, which named it the fourth best place to retire retire. Author Cynthia Drescher in America started her story, “These are to health services, quality of Malaysia along with a highland the best 10 cities in the world life and community.” location in Mexico, a lakeside for Americans to retire to, takShe listed coastal cities in city in Ireland and four AmeriThe drama around the ing into account culture, access Belize, Panama, Portugal and can cities—the home of the contentious selection of the Master Developer for the Concord Naval Weapons Station Reuse Plan has settled down and the City Council is finally ready to decide whether Catellus Development Company or Lennar Concord LLC will get the contract. The council will hear a staff report and presentations from both finalists at the regularly Volunteers and stuscheduled meeting on April 5 dents find rewards at 6:30. The meeting will not be in KARA NAVOLIO its usual venue in the Council Chamber at City Hall. With Correspondent the expectation of a large Many of us take the ability to crowd, the Council will move read and write English for grantthe meeting to the Concord ed. But it doesn’t come easy for Senior Center at 2727 Parkside students at Project Second Circle. Chance. In the event that the counThe Contra Costa County cil runs out of time on TuesLibrary program offers tutoring day, April 5, the selection will to adults over the age of 16 who be continued until April 13 at struggle to read and write. The 6:30 in the City Council Chamstudents typically fall into two ber, 1950 Parkside Dr., ConTamara Steiner/Clayton Pioneer groups: Those whose primary cord. The staff report will be DANIEL KENNEDY has struggled with dyslexia his entire life. language is English but they canon the city’s website at Encouraged by his wife and family, he entered the Literacy www.cityofconcord.org on the Council’s Project 2nd Chance tutoring program. Here he Friday preceding the meeting. works on phonetics with Literacy Assistant, Megan Brown. See Literacy, page 11

Library offers Second Chance for those struggling with English

After months of negotiations and mediation sessions, the city of Concord and the Teamsters Union continue to be at an impasse in contract talks for city workers. The Teamsters Local 856 represents 137 employees, including police dispatchers and administrative, clerical and maintenance workers. They have been working without a contract since June 2015. While tentative agreements have been reached on most issues, the two parties broke off talks concerning wages and retirement benefits. The city offered raises of 4 percent for fiscal year 2015-16 and a 4.5 percent increase for 201617, with a one-time $2,000 lump-sum payment in lieu of retroactive pay. The retirement issues remain the largest bone of