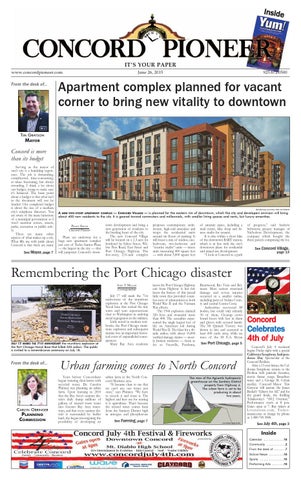 Concord is more than its budget Serving as the mayor of one’s city is a humbling experience. The job is demanding, complicated, time-consuming, at times frustrating, but always rewarding. I think a lot about our budget, trying to make sure it’s balanced. The basic point about a budget is that what isn’t in the document will not be funded. Our completed budget is about the size of a medium city’s telephone directory. You are aware of the many functions of a municipal government so I won’t mention sewers, streets, parks, recreation or public safety. There are many other aspects of what makes up a city. What fills me with pride about Concord is that there are many

A NEW FIVE-STORY APARTMENT COMPLEX — CONCORD VILLAGE — is planned for the eastern rim of downtown, which the city and developers envision will bring about 400 new residents to the city. It is geared toward commuters and millennials, with smaller living spaces and rents, but luxury amenities. PEGGY SPEAR Concord Pioneer

town development and bring a new generation of residents to the bustling heart of the city. The new Concord Village will be located on a 2.3-acre lot bordered by Salvio Street, Willow Pass Road, East Street and Port Chicago Highway. The five-story, 231-unit complex

of amenity space, including a mail center, bike shop and fitness studio for tenants. It is also within a short hike of the downtown BART station, which is in line with the city’s downtown plans for residential and mixed-use development. “I look at Concord as a path

of progress,” said Andrew Schwisow, project manager of Nicholson Development, the company which bought the three parcels comprising the lot.

JULY 17 MARKS THE 71ST ANNIVERSARY the munitions explosion at the Port Chicago Naval Base that killed 320 sailors. The public is invited to a remembrance ceremony on July 18.

July 17 will mark the 71st anniversary of the munitions explosion at the Port Chicago Naval base that rocked the tiny town and sent repercussions clear to Washington in undoing racial segregation in the military. Little noted in modern textbooks, the Port Chicago munitions explosion and subsequent mutiny was an important historical event of unparalleled consequences. Many Bay Area residents

know the Port Chicago Highway exit from Highway 4, but few know the history of this proud little town that provided countless tons of ammunition to both World War II and the Vietnam War efforts. The 1944 explosion claimed 320 lives and wounded more than 400. The casualties represented the single largest loss of life on American soil during World War II. The blast hit a 40mile radius, with about 10,000 verified damage claims — mostly broken windows — from as far as Vacaville, Petaluma,

Brentwood, Rio Vista and Belmont. More serious structural damage and severe injuries occurred in a smaller radius, including parts of Solano County and central Contra Costa. Authorities recovered 80 bodies, but could only identify 30 of them. Cleanup crews found boots with feet in them and gloves with severed hands. The SS Quinalt Victory was blown to bits and scattered at least 600 yards away, while no trace of the SS E.A. Bryan

Urban farming comes to North Concord Years before Concordians began watering their lawns with recycled water, Dr. Carolyn Phinney was planning an urban farm. Upon learning in 2010 that the Bay Area’s sanitary districts daily dump millions of gallons of treated waste water into Greater Bay Area waterways, and that every sanitary district is surrounded by buffer land, she began investigating the possibility of developing an

urban farm in the North Concord/Martinez area. “It became clear to me that we can’t use our water just once,” says Phinney. “We have to recycle it and reuse it. The highest and best use for reusing it is agriculture. That’s because the treated water comes back from the Sanitary District high in nitrogen and phosphorous

The view of the AgLantis hydroponic greenhouse on the Sanitary District property from Highway 4. The urban farm is set to be producing in about two years.

Concord Celebrates 4th of July Concord’s July 4 weekend begins Friday night with a special California Symphony Independence Day Spectacular at the Concord Pavilion. After a 13-year hiatus, the California Symphony returns to the Pavilion with patriotic favorites, movie theme songs, Broadway tunes and a George M. Cohan medley. Concord Mayor Tim Grayson will narrate the James Beckel’s “Liberty for All,” and for the grand finale, the thrilling Tchaikovsky’s “1812 Overture.” Performance starts at 8 p.m. Gates open at 7. Buy tickets at Livenation.com, Ticketmaster.com or charge by phone at 1-800-745-3000.