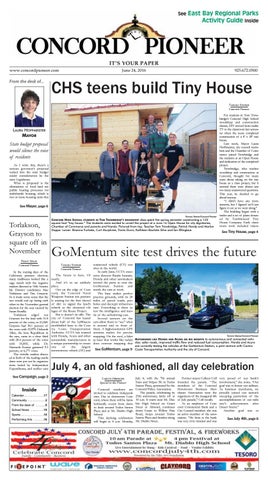 State budget proposal would silence the voice of residents

As I write this, there’s a serious governor’s proposal tucked into the state budget under consideration by the state Legislature. What is proposed is the elimination of local land use public hearing processes for multifamily housing, which is two or more housing units that

In the waning days of the California primary election, many mailboxes looked like a cage match with the negative mailers directed at 14th Assembly District candidates Mae Torlakson and Tim Grayson. So it made some sense that the two would end up facing each other in the November general election for the seat vacated by Susan Bonilla. Torlakson edged out Grayson for the lead with 31.8 percent of the votes, or 21,069. Grayson had 30.1 percent of the votes with 19,979. Deborah Allen, the lone Republican in the race, came in a close third with 28.4 percent of the votes with 18,803, while Dr. Harmesh Kumar garnered 9.3 percent, or 6,171 votes. The vitriolic mailers directed at both of the leading candidates were put out by organizations fueled by Independent Expenditures, and neither can-

For students in Tom Trowbridge’s Concord High School woodshop and construction classes, DIY moved from reality TV to the classroom last semester when the teens completed construction of a 8’ x 20’ tiny house. Last week, Mayor Laura Hoffmeister, city council members and the Chamber of Commerce joined Trowbridge and the students at an Open House and dedication of the completed project. Trowbridge, who teaches woodshop and construction at Concord, thought for many years about taking on the tiny house as a class project, but it seemed there were always just too many unanswered questions. This year, he decided to go ahead anyway. “I didn’t have any more answers, but I figured we’d just figure it out as we went along.” The building began with a trailer and a set of plans donated by Tumbleweed Tiny House Company. Early classroom work included videos

The future is here. Or nearly. And it’s in an unlikely place. Out on the edge of Concord, the Concord Naval Weapons Station sits patiently waiting for the first shovel of dirt to signal the land’s rebirth as the clustered villages of the Reuse Project. But it doesn’t sit idle. The city of Concord has leased about half of the 5,000-acre mothballed base to the Contra Costa Transportation Authority. CCTA has teamed with Honda, Acura and other automobile manufacturers in a unique partnership to create one of the largest autonomous vehicle (AV) and

connected vehicle (CV) test sites in the world. In early June, CCTA executive director Randy Iwasaki, Honda and other automakers invited the press to tour the GoMentum Station and watch the cars at work. The base makes perfect practice grounds, with its 20 miles of paved roads, potholes and decrepit infrastructure. Everything is there to test the intelligence and mettle of the self-driving cars. Several sensors on the cars allow them to “see” what is around and in front of them. A high-resolution GPS antenna makes for precise Tamara Steiner/Concord Pioneer mapping. On the roof, a lidar (a laser that works like radar) AUTOMAKERS LIKE HONDA AND ACURA SEE BIG BENEFITS to autonomous and connected vehidoes contour mapping that cles: safer roads, improved traffic flow and reduced fuel consumption. Honda and Acura are currently testing the vehicles at the GoMentum Station, a joint venture with Contra

July 4, an old fashioned, all day celebration CARLYN OBRINGER Special to the Pioneer

Concord residents are invited to celebrate Independence Day in downtown Concord, where there will be family-friendly events from dawn to dusk around Todos Santos Plaza and at Mt. Diablo High School. This daylong celebration will begin at 8 a.m. Monday,

July 4, with the 7th annual Stars and Stripes 5K in Todos Santos Plaza, sponsored by the Concord Police Association. The parade, celebrating its 25th anniversary, kicks off at 10 a.m. It starts near Mt. Diablo High School on Grant Street at Almond, continues down Grant to Willow Pass Road, loops around Todos Santos Plaza and finishes along Mt. Diablo Street.

Former mayor Colleen Coll founded the parade. “The members of the Concord Downtown Business Merchants Association were the organizers of the inaugural 4th of July parade,” Coll recalls. As an employee of Concord Commercial Bank and a City Council member, she was an active member of the association. “My boss at the bank was very civic minded and was

very proud of our bank’s involvement,” she notes. “Our goal was to honor our military. As business merchants, we proudly joined our nation’s sweeping patriotism of the accomplishments of our military’s achievements after Desert Storm.” Another goal was to