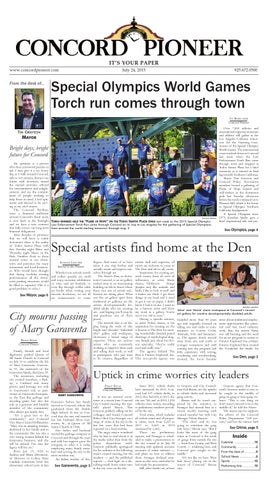 Bright days, bright future for Concord An optimist is a person who does crossword puzzles in ink. I may give it a try. Every day, as I walk around Concord, talk to our citizens, discuss our future with investors, attend the myriad activities offered for entertainment and enlightenment, and see the commitment of people working to help those in need, I feel optimistic and blessed to be serving as my city’s mayor. The Concord Pavilion, once a financial millstone around Concord’s fiscal neck, is now back in the limelight and we have a new contract that fully covers our long-term financial obligations. After decades of promises that we will have a viable downtown there is the reality of Todos Santos Plaza with free Tuesday night Blues and Thursday night Music in the Park. Families flock to these musical series in our downtown and patronize the many restaurants and local businesses. Who would have thought that during weekday evening performances all the downtown parking structures would be filled to capacity? This is a good problem to solve.?

TORCH RUNNERS HELD THE “FLAME OF HOPE” ON THE TODOS SANTOS PLAZA STAGE last week as the 2015 Special Olympics Law Enforcement Torch Run came through Concord on its way to Los Angeles for the gathering of Special Olympians from around the world starting tomorrow through Aug. 2.

Whether you actively search and collect specific art, stroll and enjoy museum exhibitions or wine and art festivals, or even flip through coffee table art books when visiting your See Mayor, page 6 favorite bookstore, we are all art connoisseurs to some

Family, friends and local dignitaries packed Queen of All Saints Church in Concord on July 10 to celebrate the life of Mary Garaventa. Garaventa, 91, the matriarch of the Garaventa family, died June 29. The mourners, including city council members, a Bishop, a Cardinal and many priests, paid homage not only to Garaventa’s role as partowner of Garaventa Enterprises, the East Bay garbage and recycling giant, but also her role as a gracious and humble member of the community who always put family first. “It’s a great loss to the community,” says Concord Vice Mayor Laura Hoffmeister. “Mary was an amazing woman, dedicated to her family and to the community. She was also a very strong woman behind the Garaventa business, and she will be missed. I’m sure her legacy will live on.” Born Jan. 15, 1924 to Andrea and Maria (Devincenzi) Moresco in Colma, Mary Candida Garaventa lived her elementary school years in San

Over 7,000 athletes and international superstar musicians and athletes will gather in the Los Angeles Coliseum tomorrow for the Opening Ceremonies of the Special Olympics World Games. The international event touched down in Concord last week when the Law Enforcement Torch Run came through town and stopped at Todos Santos Plaza for a brief ceremony as it entered its final leg towards Southern California. Mayor Tim Grayson and Concord Police Association members hosted a gathering of Flame of Hope runners and well-wishers in the downtown park last Tuesday afternoon before the torch continued on to Pleasant Hill, which is the home to Special Olympics Northern California headquarters. A Special Olympian since 1975, Jonathan Sparks gave a brief inspirational talk and pre-

degree. And some of us have taken it one step further and actually create and express ourselves through art. The Artist’s Den, in downtown Concord, is an art gallery tucked away in an unassuming building on Salvio Street where these very acts of artistic celebration are taking place. What sets this art gallery apart from traditional art galleries are the artists: developmentally disabled adults who are creating art…and hoping you’ll stop by and purchase one of their pieces. The artwork that is on display, lining the walls of this bright and cheerful “industrial chic” gallery and workspace, showcases a broad range of expertise. There are serious artists who are constantly working to improve their craft and selling their work, as well as participants who just want to be creative. Regardless of

artistic skill and expertise, all artists are welcome to come to The Den and above all, create. Inspiration for creating artwork comes from all sorts of influences, as artist Marie shares, “Different things [inspire me] like animals and birds. I like to look at stuff and it makes me think. I get these things in my head and I need to get it out on paper. I didn’t know I had it in me. I want to be a famous artist and show my work in a gallery. You’re never too old to start.” Having a specific interest, as artist Nolan shares, is his inspiration for creating art. He is known at The Den for creating wonderfully detailed pencil drawings of mythological dragons. Simply put, about his chosen specialty, “they’re really cool and really rare.” The agency behind The Den is Futures Explored, Inc. This non-profit agency was

founded more than 50 years ago and originally focused on selling arts and crafts to communities in Contra Costa, Alameda, Yolo and Sacramento. The agency slowly moved away from arts and crafts as younger consumers and staff coming into the program had little experience with sewing, crocheting and woodworking. Instead, the focus became

more about traditional employment opportunities like janitorial and fast food industry work. But, the artistic flame was still burning and the need for an art program to return to Futures Explored was evident. Futures Explored then created the Vocational Art Studio for

Francisco before her family moved to Concord, where she graduated from Mt. Diablo High School. It was in Concord that she met and married her late husband Silvio Garaventa, Sr., at Queen of All Saints Church in 1948. Her father and husband started the garbage company in Concord and through the years and with her support grew the company to what it is today, employing many family members and serving the city in the most modern way. An Italian mother of five,

It was an unusual occurrence at a recent June Concord City Council meeting: the typically placid Mayor, Tim Grayson, publicly calling out his colleague and friend, Concord Police Chief Guy Swanger, on a surge of crime in the city in the last few years that had been reported on a local website. The angry mayor wondered why he had to read about it in the media rather than from the police department itself. Grayson publically apologized for his outburst at the following week’s council meeting, but the incident — and the published reports — shed light on a disturbing trend: Some crime rates in the city were on the rise.

Since 2011, vehicle thefts have increased. In 2011, Concord had 637 vehicle thefts, in 2012, they had 659, in 2013, the city saw 768, and in 2014, 1,016 vehicles were stolen, according to preliminary numbers provided by the city. Total crime, which includes all violent crime and all property crime, went from 4,223 in 2011 to 5,664 in 2014 (increased by 1,441). These are preliminary reports, and Swanger is scheduled to make a presentation to the city council at its July 28 meeting with updated, accurate accounts of crime statistics — and plans on how to address them. Swanger declined comment on this story until after he had made his presentation. Still, what stands out, at least

to Grayson and City Councilman Edi Birsan, are the upticks in vehicle thefts and increased gang activity. Birsan said he wasn’t surprised by the statistics, as Swanger had alerted him at a recent weekly meeting each council member has with City Manager Valerie Barone. “The chief said he was going to reinstitute the gang task force,” Birsan says. “But it looks like most of the gang crime in Concord is the result of gangs from outside the city — from East County and West County — retaliating here, and Concord gets caught in the middle.” “It’s not like we have ‘West Side Story’ playing out in the streets of Concord,” Birsan says.

Grayson agrees that Concord’s location makes it easy to be caught in the middle of gang-on-gang or intra-gang violence. “This is one thing we don’t want Concord to be in the middle of,” he told the Pioneer. The mayor says he supports the efforts of the Concord Police Department “100 percent,” and has the utmost faith