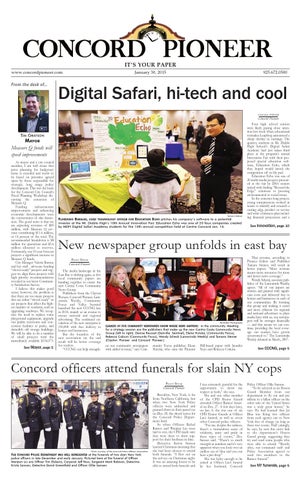 Measure Q funds will speed improvements As mayor and a city council member, I am well aware that prior planning for budgetary items is essential and needs to be based on priorities agreed upon by those responsible for strategic, long range policy development. This was the basis for the Concord City Council’s Fiscal Planning Workshop discussing the extension of Measure Q. Funding infrastructure improvements and enhancing economic developments were the cornerstones of this discussion. The good news is that we are expecting revenues of $85 million, with Measure Q revenue contributing $11.6 million, or 14 percent of the total. The recommended breakdown is $8 million for operations and $3.6 million allocated to reserves. Fortunately, our 10-year forecast projects a significant increase in Measure Q funds. City Manager Valerie Barone and her staff advocate funding “shovel ready” projects and suggest we align these projects with high priority recommendations revealed in our latest Community Satisfaction Survey. I believe this makes good sense; however, the problem is that there are too many projects that are either “shovel ready” or are projects that affect the highest number of residents, such as upgrading roadways. We recognize the need to replace some playground equipment, upgrade our public restrooms and concession facilities at parks, and demolish old storage buildings. We will be able to do a number of small projects with the immediately available $554,073.

Four high school seniors were likely paying close attention last week when educational toymaker Leapfrog announced a sharp decline in earnings. The quartet, students in Mt. Diablo High School’s Digital Safari Academy had just taken third place at the program’s annual Innovation Fair with their proposed special education software, Education Echo, which they hoped would knock the competition off its lily pad. Education Echo was one of 20 multi-media projects presented at the fair by DSA seniors tasked with finding “Beyond the Edge” solutions to pressing environmental or social issues. In the semester-long project, young entrepreneurs worked in teams to identify and research a cutting edge product or service and write a business plan including financial projections and a

The media landscape in the East Bay is shifting again, as five local community papers are banding together to create the new Contra Costa Community News Group. Publishers from the Clayton Pioneer, Concord Pioneer, Lamorinda Weekly, Community Focus and Valley Sentinel launched the new CCCNG late in 2014, mainly as an avenue to attract national and regional advertising. The combined circulation of the new enterprise is 150,000 with free delivery to homes and businesses. But the founders of the new association say the end result will be better coverage for readers. “CCCNG can help strength-

That revenue, according to Pioneer Editor and Publisher Tamara Steiner, will result in better papers. “More revenue means more resources for more and better news coverage.” Wendy Scheck, associate publisher of the Lamorinda Weekly, agrees. “All of our papers are written and printed with significant costs and delivered free to homes and businesses in each of our communities. By forming this group and making it easier and more efficient for regional and national advertisers to place media buys with us, our newspapers will be stronger financially — and that means we can continue providing the local coverage our readers have grown accustomed to.” The Lamorinda Weekly debuted in March, 2007.

Brooklyn, New York, is far from Northern California, but when two New York Police officers were ambushed and gunned down in their patrol car on Dec. 20, the shock waves hit the Concord Police Department hard. So when Officers Rafael Ramos and Wenjian Liu were laid to rest, the CPD made sure they were there to show support for their brethren in blue. Detective Krista Sansen learned Christmas morning that she had been chosen to attend both funerals. “I flew out on the red-eye on Christmas night. It was an amazing honor to be able to attend both funerals and

I was extremely grateful for the opportunity to show my respect at both,” she says. She and one other member of the CPD Honor Guard attended Officer Ramos’ funeral on Dec. 27. A few days later, on Jan. 4, she was one of six CPD Honor Guards at Officer Liu’s funeral, as well as seven other Concord police officers. “For me, despite the sadness, there’s a tremendous sense of solidarity, unity and pride in these types of events,” Det. Sansen said. “There’s so much strength in numbers and it’s very apparent when you look over an endless sea of blue and you can hear a pin drop.” She was lucky enough to be joined at Officer Liu’s funeral by her husband, Concord

Police Officer Ollie Sansen. “To be selected as an Honor Guard Member from our department to fly out and pay tribute to a fallen officer on the other side of the United States was a truly great honor,” he says. He had learned that Jet Blue was flying two officers from each agency out to New York free of charge (as long as there was room). Half jokingly, he says, he sent this news link to the department’s Honor Guard group, suggesting they try and send some people who were able to attend. “Shortly after, our command staff and Police Association agreed to send two members to the Ramos funeral.”