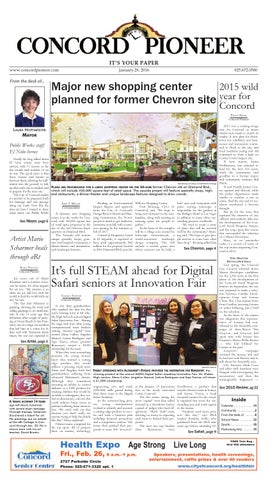 Finally the long talked about El Niño winter rains have arrived, with 11 storms so far this month with number 12 on its way. The good news is that these storms had breaks in between them, allowing for infilRendering courtesy of Architects Orange tration into the ground, to tidy up after each one as needed, and PLANS ARE PROGRESSING FOR A LARGE SHOPPING CENTER ON THE 30-ACRE former Chevron site on Diamond Blvd., which will include 350,000 square feet of retail space. The upscale project will feature specialty shops, highto prepare for the next one. The City of Concord makes end restaurants, a dinner-theater and unique landscape features designed to draw crowds. it a priority to be prepared, both for drainage and safe passage Pending an Environmental Willows Shopping Center. kids’ area, and restaurants with JOHN T. MILLER along our roads. Now that the Impact Report and approval Fred Bruning, CEO of patio seating. Lifescape is Correspondent rains are here I wanted to share from the City of Concord’s CenterCal, said, “We hope to responsible for the gardens at some items our Public Works A dynamic new shopping Design Review Board and Plan- bring new elements to the mar- the Bellagio Hotel in Las Vegas center is in the works for Con- ning Commission, the 30-acre ketplace, along with creating an in addition to many other outSee Mayor, page 6 cord, with 350,000 square feet project is slated to get underway amazing space for people to standing projects worldwide. “We want to create a sense of retail space proposed at the sometime next fall, with a tenta- gather.” At the heart of the complex of place that will be received site of the old Chevron head- tive opening by the summer or fall of 2017. will be a village area created by well by the community,” Brunquarters on Diamond Blvd. CenterCal Properties, based Lifescape International, a ing said. “We hope to give peoThe Veranda will feature landscape ple reasons to come here other unique specialty shops, gour- in El Segundo, is reported to world-renowned met chef-inspired restaurants, a have paid approximately $42 design company. This will than shop.” Bruning added that dinner-theater and destination- million for the property located include a central green area See Chevron, page 4 at 2001 Diamond Blvd, near the where concerts can be held, a style landscape features.

Joy oozes out of Mario Scharmer and it touches everyone he meets. It’s what inspires his art too. “My mission is to share my joy and love with the world, to heal the world with my art,” he says. The fact that Scharmer is painting, showing his work and selling paintings is no small miracle. It was 14 years ago that Scharmer, after a night of partying at Ocean Beach in San Francisco, was in a tragic car accident that left him in a coma for 21 days and with Traumatic Brain Injury. He was not expected to

A TRAGIC ACCIDENT 14 YEARS ago left Mario Scharmer with severe brain damage. Through therapy, Scharmer discovered a talent for art. His paintings are on exhibit at the aRt Cottage in Concord through Jan. 30. He is shown here with his art teacher, David Brooks.

It was their grandmothers who sparked the idea for this year’s winning team at Mt. Diablo High School’s annual Digital Safari Innovation Fair. Sharing the stage with four other young entrepreneurial team finalists seeking “investor capital” were seniors Elena Cullen, Angelica Mancol, Leticia Rodriguez and Sepi Tuavo, whose product Rememory netted a $1000 scholarship for the team. When they were researching projects, the young women knew they wanted a cutting edge product that would address a pressing social need. Elena and Angelica both had grandmothers suffering from advanced Alzheimer’s disease. Although they considered inventing an inhaler to control diabetes or a GPS product for tracking children that would be invisible to kidnappers, they settled on Rememory, a device that could redirect brain waves in patients suffering from memory loss. “We stuck with our idea because you don’t really see anyone trying to help the elderly like this,” Elena explained. Fifteen teams competed for the top spots. All 15 projects drew on science, technology,

engineering, arts and math (STEAM) skills gained during their three years in the Digital Safari Academy. In the semester-long project, young entrepreneurs worked to identify and research a cutting edge product or service and write a business plan including financial projections and a competitive analysis. The teams then pitched their proposals to some 500 “investors”

at the January 13 Innovation Fair in the newly renovated Centre Concord. The five teams raising the most “capital” were then called forward in a showdown before a panel of judges who fired off questions “Shark Tank”-style, showing no mercy in expecting each team to defend their proposals. The next two top finalists after Rememory were

THE MASTER DEVELOPER SAGA Last spring, the Concord City Council whittled down Master Developer candidates for the 2,300 acres in the first phase of the development of the Concord Naval Weapons Station. In September, the city was prepared to make a selection between Catellus Development Corp. and Lennar Urban. But a last-minute letter from Catellus, accusing Lennar of unfair lobbying, put a hold on the selection. At the heart of the matter was allegations that representative of Lennar had contributed to the Assembly campaign of then-Mayor Tim Grayson, and Grayson had spent time with former San Francisco Mayor Willie Brown — who had lobbied for Lennar in the past. Grayson’s campaign returned the money, and said he had met with Brown only to talk about his Assembly race. City Attorney Mark Coon and other staff members were charged with investigating the accusations, and then the unimaginable happened —

2015 was a coming-of-age year for Concord, as major strides were made to enrich its vitality. A new plan for downtown was solidified, new businesses and restaurants continued to flock to the city, and local residents young and old continued to shine a light on Contra Costa’s largest city. A new mayor, Laura Hoffmeister, was selected to lead for the next two years, while the community said goodbye to a former mayor and community stalwart, Bill Shinn. A new Family Justice Center opened and thrived, while the police department made strides to combat a rise in crime. And the city and its residents weathered a historic drought. But by far the issue that captured the attention of city officials and residents alike was the development of the Concord Naval Weapons Station, and the soap opera-like events that surrounded the selection of a Master Developer. Here, in no particular order, is a review of some of the top stories impacting Concord in 2015.