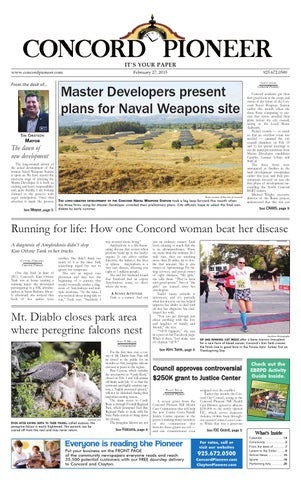 The dawn of new development The long-awaited advent of the actual development of the former Naval Weapons Station is upon us. We have started the interview stage of selecting the Master Developer. It is both an exciting and heavy responsibility and, quite frankly, I am looking forward to the process with eager anticipation. Once that selection is made the process

Photo courtesy of the City of Concord

THE LONG-AWAITED DEVELOPMENT OF THE CONCORD NAVAL WEAPONS STATION took a big leap forward this month when the three firms vying for Master Developer unveiled their preliminary plans. City officials hope to select the final candidate by early summer.

Concord residents got their first good look at the scope and vision of the future of the Concord Naval Weapons Station earlier this month when the three firms competing to execute that vision unveiled their plans before the city council, acting as the Local Reuse Authority. Packed crowds — so much so that an overflow room was needed — jammed the city council chambers on Feb. 10 and 11 for special meetings to see the initial presentations from Master Developer candidates Catellus, Lennar Urban and SunCal. The three firms were announced as finalists in the land development sweepstakes earlier this year, and their presentations focused on just the first phase of development surrounding the North Concord BART station. Michael Wright, executive director of the Reuse project, underscored that this was just

Running for life: How one Concord woman beat her disease A diagnosis of Amyloidosis didn’t stop Kim Ottone Tank in her tracks. CYNTHIA GREGORY Concord Pioneer

One day, back in June of 2013, Concord’s Kim Ottone Tank was at home treating a running injury she developed participating in a 50K ultramarathon in Santa Barbara. Shortly afterward, she noticed that both of her ankles were

swollen. She didn’t think too much of it at the time. Still, something urged her not to ignore her symptoms. She saw an urgent care physician and that was the beginning of a journey that would eventually render a diagnosis of Amyloidosis and multiple myeloma. “At the time, I was worried about being able to run,” Tank says. “Suddenly I

was worried about living.” Amyloidosis is a life-threatening disease that occurs when proteins build up in the body’s organs. It can affect cardiac function, the kidneys, the liver or spleen. Amyloidosis is a very rare disease, affecting just eight in 1 million people. She and her husband found that Stanford had an expert Amyloidosis team, so that’s where she went.

A SUNNY ATTITUDE Tank is a runner. And not

EVEN AFTER GIVING BIRTH TO THEIR YOUNG, called eyasses, the peregrine falcon is easily frightened. The parents can be scared off from the nest and may never return.

For the first time ever, a corner of Mt. Diablo State Park will be closed to the public for six months so that peregrine falcons can nest in peace in the region. Pine Canyon, which includes the area known as “Castle Rock,” closed on Feb. 1 and will remain off-limits until July 31 so that the territorial and highly sensitive raptors, a “highly protected species,” will not be disturbed during their important nesting season. The main access to Castle Rock is through Foothill Regional Park, which prompted East Bay Regional Parks to work with the State Parks system to bring about the closure. The peregrine falcons are not

just an ordinary runner. Tank loves running so much that she is an ultramarathoner. These are more than the ordinary 26.1 mile race, they are anything more than 26 miles, up to double that amount. She is also owner of Apronstrings Pet Sitting services, and proud owner of eight chickens. “My girls,” she calls them. “They’ve been such good sports.” Two of “the girls” are named after her oncologists. Tank’s sunny attitude is infectious, and it’s partially what her doctors say has helped improve her ability to deal with all that her diagnosis has challenged her with. “You can get through just about anything with the love and laughter of family and friends,” she says. “%$*# happens,” she says in a post on her Facebook page. When it does, “just make sure it's chicken %$*#.”

UP AND RUNNING JUST WEEKS after a bone marrow transplant for a rare form of blood cancer, Concord’s Kim Tank crosses the finish line in good form in the Forma Gym Turkey Trot on Thanksgiving Day.

Check out the EBRPD Activity Guide Inside.

resigned over the conflict. Earlier this month, the Concord City Council, acting as the Concord Pleasant Hill Health Care District, agreed to allocate $250,000 to the newly opened FJC, which serves domestic violence victims from throughout central Contra Costa County. While that was a generous