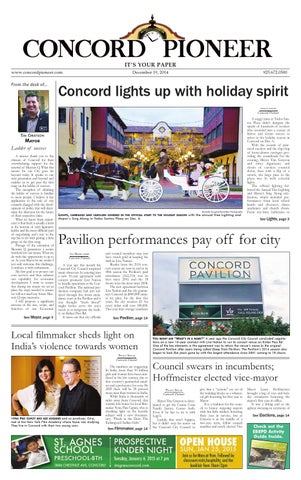 Ladder of success A sincere thank you to the citizens of Concord for their overwhelming support for the renewal of Measure Q. What this means for our City goes far beyond today. It speaks to our next generation and beyond and enables us to get past the first rung on the ladder of success. The metaphor of climbing the ladder of success is familiar to most people. I believe it has application to the role of city councils charged with the development of policy that will determine the direction for the future of their respective cities. What we know from experience is that there is usually a mob at the bottom of each figurative ladder and the most difficult part of negotiating one’s way to the top has to do with getting a firm grasp on the first rung. Passage of the extension of Measure Q guarantees a secure foothold for our future. What we do with this opportunity is up to us. As your Mayor let me assure I not only welcome this challenge, I embrace it with enthusiasm. My first goal is to protect our core services and then enhance our capability for economic development. I want to ensure that during my tenure we set in place the steps needed to ensure we will not need any future Measure Q type measures. I will propose a significant increase in the size, scope, and function of our Economic

LIGHTS, CARRIAGES AND CAROLERS USHERED IN THE OFFICIAL Mayor’s Sing Along in Todos Santos Plaza on Dec. 6.

START TO THE HOLIDAY SEASON

with the annual Tree Lighting and

A soggy lawn at Todos Santos Plaza didn’t dampen the spirits of hundreds of revelers who crowded into a corner of Salvio and Grant streets to usher in the holiday season in Concord on Dec. 6. With the sounds of pintsized carolers and the clip-clop of horse-drawn carriages providing the soundtrack for the evening, Mayor Tim Grayson and other dignitaries and choirs of carolers counted down, then with a flip of a switch, the large pine in the plaza was lit with colorful lights. The official lighting followed the Annual Tree Lighting and Mayor’s Sing Along celebration, which included performances from local school bands and choruses, dance academies and church choirs. From itty-bitty ballerinas to

A year ago this month the Concord City Council surprised many observers by entering into a new 10-year agreement with concert promoter Live Nation to handle operations at the Concord Pavilion. The national production company had just suffered through five down attendance years at the Pavilion and it was thought “fresh blood” might better serve the city’s needs to re-invigorate the facility on Kirker Pass Rd. It turns out that city officials

and council members may just have struck gold in keeping the faith in Live Nation. Results from the 2014 concert season are now in and in its 40th season the Pavilion’s paid attendance (162,514) was its best since 2001 and the 18 shows were the most since 2008. The new agreement between Live Nation and the city guarantees Concord an $800,000 annual fee plus, for the first five years, the city receives $3 for every ticket sold over 100,000. This year that overage translates

NYNA PAIS CAPUTI AND HER HUSBAND and co-producer, Gino, met at the New York Film Academy where Nyna was studying. They live in Concord with their two young sons.

The numbers are staggering: In India, more than 50 million girls and women have been murdered in the last century, due to that country’s patriarchal mindset and a preference for sons. By 2020 there will be 20 percent more men than women in India. While India is thousands of miles away from Concord, that statistic hits home for local filmmaker Nyna Pais Caputi, who is shedding light on the horrific subject with a new documentary, “Petals in the Dust: The Endangered Indian Girls.”

YOU MIGHT ASK “WHAT’S IN A NAME?” A year ago the Concord City Council concluded negotiations on a new 10-year contract with Live Nation to run its concert venue on Kirker Pass Rd. One of the key elements in the agreement was to return the venue’s name to the original Concord Pavilion after years being called Sleep Train Pavilion. The Pavilion’s 2014 season also began to look like years gone by with the largest attendance since 2001 coming to 18 shows.

Mayor Tim Grayson is determined to get the Contra Costa Family Justice Center built. Even if he has to do it with Lego’s. Luckily, that won’t happen, but it didn’t stop his mates on the Concord City Council to

give him a “custom” toy set of the building blocks as a whimsical gift honoring his first year as Mayor. It is a tradition for the council to honor outgoing mayors with fun little trinkets honoring their year in service, but as Grayson is in the middle of a two-year term, fellow council member and newly elected Vice

Mayor Laura Hoffmeister brought a bag of toys and holiday ornaments honoring the mayor’s first year in office. It was a fitting end to the upbeat swearing-in ceremony of

Check out the EBRPD Activity Guide Inside.