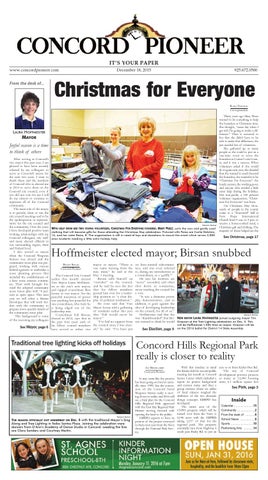 Christmas for Everyone KARA NAVOLIO Correspondent

Joyful season is a time to think of others

After serving as Concord’s vice mayor this past year, I am pleased to have been recently selected by my colleagues to serve as Concord’s mayor for the next two years. I want to thank them and the residents of Concord who re-elected me in 2014 to serve them on the Concord city council, even if you did not vote for me I will do my utmost to continue to represent all of the Concord community. The main role of the mayor is to preside, chair or run the city council meetings and to be the spokesperson or representative for the city council and the community. Over the years I have developed positive team working relationships with my Concord colleagues, city staff and many elected officials in our surrounding region, State and Federal level. I also served as mayor when the Concord Weapons Station was closed and the community reuse plan was prepared, working with various federal agencies to undertake a reuse planning process that included the establishment of a base reuse citizens committee. Their work brought forward the adopted community reuse vision plan with 70 percent as open space. This next year we will select a Master Developer that will work further with the community to prepare more specific details of the community reuse plan This background is some of the reasoning my colleagues

WITH HELP FROM HER TWO YOUNG VOLUNTEERS, CHRISTMAS FOR EVERYONE FOUNDER, MARY PEREZ, sorts the new and gently used clothing that will become gifts for those attending the Christmas Day celebration. Pictured with Perez are Carlie Delchim, 16, and her sister Rosie, 8. The organization is still in need of toys and donations to mount the event which serves 3,000 area residents needing a little extra holiday help.

Thirty years ago Mary Perez wanted to do something to help the homeless at Christmas time. She thought, “some day when I get rich I’m going to make a difference.” Then it occurred to her that she didn’t have to be rich to make that difference; she just needed lots of volunteers. She gathered up as many people as she could to put on a one-time event to serve the homeless in Contra Costa County, and it was a success. When volunteers asked if she would do it again next year, she decided that she wanted to reach beyond the homeless, she wanted it to be “Christmas For Everyone”: the lonely seniors, the working poor, and anyone who needed a little extra help during the holidays. Her non-profit, a 100 percent volunteer organization, “Christmas For Everyone” was born. On Christmas Day thousands of people in the county come to a “borrowed” hall at New Hope International Church from 9 a.m. to 4 p.m. to receive a home-cooked meal, a Christmas gift and clothing. The majority of those helped are the

The Concord City Council earlier this month elected Vice Mayor Laura Hoffmeister as the city’s new mayor, and tapped councilman Ron Leone as vice mayor. Yet the peaceful transition of power was anything but peaceful for one councilman, who feels he is being edged out of the leadership mix. Councilman Edi Birsan, elected in 2012, says that in the past four years each of See Mayor, page 6 his fellow council members have served as either vice

mayor or mayor. “There is one name missing from the mix: mine,” he said at the Dec. 1 meeting. Birsan calls himself an “outsider” on the council, and he said he sees the fact that his fellow members passed him over for a leadership position as “a clear display of political retribution.” He even said that Vice Mayor Leone told a gathering of residents earlier this year that “Edi would never be mayor.” “I’ve had no support from the council since I was elected,” he said. “I’ve been put

on least-wanted subcommittees, and was even referred to, during my introduction as a councilman, as a ‘gadfly.’” He says his motions are “never” seconded, and often shot down in committee, never reaching the council for a vote. “It was a dramatic power play demonstration…and in addition, it goes against the idea of developing leadership on the council, for all of us.” Hoffmeister said that she Tamara Steiner was “dumbfounded” that Bir- NEW MAYOR LAURA HOFFMEISTER joined outgoing mayor Tim san seemed to think he would Grayson at the Tree Lighting celebration on Dec. 5. This

THE SEASON OFFICIALLY GOT UNDERWAY ON DEC. 5 with the traditional Mayor’s Sing Along and Tree Lighting in Todos Santos Plaza. Joining the celebration were dancers from D’Ann’s Academy of Dance Studio in Concord. Leading the line are Clara Sanders and Courtney Martin.

will be Hoffmeister’s fifth time as mayor. Grayson will be on the 2016 ballot for District 14 State Assembly.

It may seem like the process has been going on forever (actually since 1999) but the conversion of the Concord Naval Weapons Station really is moving closer to reality and 2016 will see a final plan for the Concord Hills Regional Park approved with the East Bay Regional Park District moving forward with opening the land to the public. EBRPD expects to have its portion of the project conveyed to them next year from the Navy through the National Park Service.

With that timeline in mind the district held its second public meeting last month at Concord Senior Center which included a report on project background and current status and then a group exercise where six tables of local citizens weighed the attributes of the two alternate design concepts EBRPD has developed. The entire area of the CNWS property which will be turned over from the Navy is 5,046 acres with the EBPRD taking 2,537 of that for the regional park. The property essentially runs from Highway 4 south past Bailey Rd. to just an

acre or so from Kirker Pass Rd. The city of Concord development portion projects as many as 12,000 housing units, 6.1 million square feet