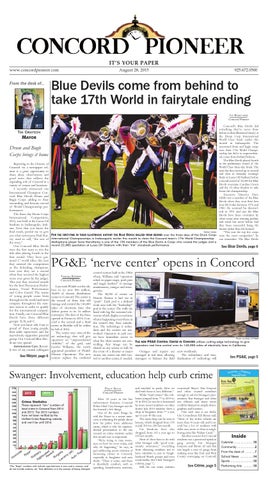 Drum and Bugle Corps brings it home Reporting to the Citizens of Concord via a newspaper column is a great opportunity to share ideas, observations and good news that reflects the expanding role of Concord in a variety of venues and locations. I recently witnessed our International Champion Concord Blue Devils Drum and Bugle Corps adding to their astounding and historic record of World Championship performances. The three-day Drum Corps International Competition, 2015, was held at the Lucas Oil Stadium in Indianapolis, Indiana. Now that you know the final result, permit me to give you what newscaster Paul Harvey used to call, “the rest of the story.” Our Concord Blue Devils were the first team to win the title after placing fourth in the first round. They have garnered 17 world titles; this year they entered the competition as the defending champions. Last year they set a record when they received the highest score ever given by the judges. This year they received awards for the best Percussion Performance, Visual Performance and Color Guard. The teams of young people come from throughout the world and must compete throughout the summer season in order to qualify for the international competition. Finally, our Concord Blue Devils have three different groups: A, B, and C. Now you know why I am so proud of these young people, their adult supervisors and the marvelously supportive parental group. Our Concord Blue Devils are very special. Autonomous Cars. Recently two of my council colleagues

Concord’s Blue Devils did something they’ve never done before in their illustrious history at the Drum Corp International World Class finals earlier this month in Indianapolis. The renowned drum and bugle corps won their 17th World Championship but did it in unprecedented, come-from-behind fashion. The Blue Devils placed fourth in the preliminary round of the World Class three-day finals. The next day they moved up to second and then in Saturday evening’s finals at Lucas Oil Stadium before a record crowd of 22,085 the Blue Devils overcame Carolina Crown and the 10 other finalists to take home the championship. Executive Director Dave Gibbs was a member of the Blue Devils when they won their first four DCI titles between 1976 and 1980. He assumed his director’s role in 1991 and says the Blue Devils have been overtaken by other corps after winning prelims and semis but never before had they been successful being the hunter rather than the hunted. Parker Staten “This year the top five corps FOR THE FIRST-TIME IN THEIR ILLUSTRIOUS HISTORY THE BLUE DEVILS RALLIED FROM BEHIND over the three days of the Drum Corps were the most competitive” he International Championships in Indianapolis earlier this month to claim the Concord team’s 17th World Championship. can remember. The Blue Devils Mellophone player Sena Narottama is one of the 150 members of the Blue Devils A Corps who wooed the judges and a record 22,085 spectators at Lucas Oil Stadium with their “Ink” storybook performance. See Blue Devils, page 6

Last week PG&E cut the ribbon to its new $40 million, 38,000 sf. electric distribution center in Concord. The center is the second of three that will manage and control the 140,000 miles of electricity lines that deliver power to its 16 million customers. The first of the three opened in Fresno in 2014, Concord is the second and a third center in Rocklin will be online by fall of 2016. The center uses state-of-the art technology that will give operators an “unprecedented visibility” of the grid, said Geisha Williams, the newly appointed president of PG&E Electric Operations. The new See Mayor, page 6 centers replace the outdated

control centers built in the 1980s where, Williams said “operators relied on paper maps, push pins and magic markers” to manage maintenance, outages and emergencies. The 38,000 sf. center on Detroit Avenue is laid out in “pods”. Each pod is a defined work area with the “leadership” pod in the center. The walls are lined with big flat screened televisions which display in real time what is happening everywhere in the center’s Bay Area jurisdiction. The technology is redundant and the centers are networked. Operators in each center have immediate access to what the other centers are controlling. Any image can be shared on any screen or wall. In the event of a disaster or major storm, any center can shift control to another center, if needed.

THE NEW PG&E CONTROL CENTER IN CONCORD utilizes cutting-edge technology to give operators real time control over its 140,000 miles of electricity lines in California.

Outages and repairs are crew workloads. managed in real time, allowing The redundancy and stanmanagers to balance the field dardization of technology will

Crime Statistics These represent “raw” numbers of local crime in Concord from 2014 and 2015. The 2015 numbers have not been verified by the Unified Crime Reporting website, and won’t be until 2016.

*The “Rape” numbers only include rape between a man and a woman, and do not include sodomy, etc. That definition is in the process of being changed.

After 32 years in the law enforcement business, Concord Police Chief Guy Swanger says he has learned a few things. One of the main things, he told the Pioneer in a recent interview, is educating the public about how his police force addresses crime, which is why his unprecedented presentation to the city council on crime statistics earlier this month was so important. “We’re trying to raise awareness on how we cover crime, and why it’s happening,” he says, in part addressing recent criticism of increasing crimes in Concord, especially in burglaries and auto thefts. “There is crime, and there is disorderly conduct, such as speeding, homelessness activities,

and mischief in parks. How we deal with those is very different.” While “hard crimes” like robberies jumped from 77 in 2014 to 91 in 2015, he says he is heartened by more recent numbers on other fronts: July 2015 statistics show a drop in burglaries from 77 a year ago to just 40 this year. The same drop can be seen in larceny, which dropped from 335 in July 2014 to 240 last month. Car break-ins have also dropped, from 143 a year ago to 103 last month. Most of these have to do with what Swanger calls “good community awareness,” everything from educating residents not to leave valuables in cars to Neighborhood Watch groups and even social media. (See Chief Swanger’s column, page 7.) Still, the raw crime statistics

concerned Mayor Tim Grayson and other council members enough to ask for Swanger’s presentation. But Swanger and other city officials said many issues could be blamed on simple demographics and location. One such area is car thefts. City Councilman Edi Birsan said, “Most of the stolen vehicles are more than 10 years old, and Concord has a lot of residents with older cars, more so than in neighboring cities like Walnut Creek.” Another concern for Concord residents was a perceived uptick in gang activity, but Swanger, Grayson and Birsan all said that was largely a case of gangs from outlying areas like East and West County converging on Concord,