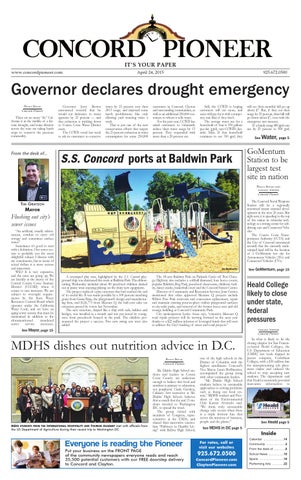 There are no more “ifs.” California is in the middle of a historic drought, and water districts across the state are taking harsh steps to conserve the precious commodity.

Governor Jerry Brown announced recently that he would cut deliveries to water agencies by 25 percent — and that reduction is trickling down to Contra Costa Water District users. The CCWD voted last week to ask its customers to conserve

water by 25 percent over their 2013 usage, and imposed some harsh prohibitions, like only allowing yard watering twice a week. That is just one of the new conservation efforts that targets the 25 percent reduction in water consumption for some 250,000

customers in Concord, Clayton and surrounding communities, as well as an additional 250,000 customers to whom it sells water. For the past year, CCWD has asked customers to voluntarily reduce their water usage by 15 percent. They responded with more than a 20 percent cut.

Still, the CCWD is hoping customers will cut more, and users will pay for it with a temporary rate hike if they don’t. The average water use for a household of four is 350 gallons per day (gpd), says CCWD’s Jennifer Allen. If that household continues to use 350 gpd, they

will see their monthly bill go up about $7. But, if they cut their usage by 25 percent, their bill will go down about $7, even with the emergency rate increase. If a family using 400 gpd cuts use by 25 percent to 300 gpd,

The Concord Naval Weapons Station will be a regionally renowned transit oriented development in the next 20 years. But right now, it is speeding to the top of the nation in vehicular technology as a testing center for selfdriving cars and Connected Vehicles. The Contra Costa Transportation Authority (CCTA) and the City of Concord announced recently that the currently undeveloped land will be the location of a GoMentum test site for Autonomous Vehicles (AVs) and Connected Vehicles (CVs).

Flushing out city’s sewer issues “An artificial, usually subterranean, conduit to carry off sewage and sometimes surface water.” Sometimes it’s good to start with a definition. Our sewer system is probably not the most delightful subject I discuss with my constituents, but in terms of actual dollars it is most serious and important. Why? It is very expensive, and the rates are going up. We are literally at the mercy of the Central Contra Costa Sanitary District (CCCSD) when it comes to rate increases. We are subject to oversight requirements by the State Water Resources Control Board which operates under the California Water Code, and we have an aging sewer system that must be maintained in addition to the aforementioned mandated sewer service increases.

A revamped play area, highlighted by the S.S. Concord playground ship, was christened this week at Baldwin Park. The ribboncutting Wednesday included about 80 preschool children decked out in pirate wear enjoying playing on the shiny new equipment. The project replaced a play structure that had reached the end of its useful life. It was made possible by a 100 percent matching grant from GameTime, the playground’s design and manufacturing firm, and $126,775 from Measure Q, the half-cent sales tax extension passed by voters last November. The new structure, shaped like a ship with sails, ladders and bridges, was installed in a month and was pre-tested by youngsters from preschools housed in the park. The children pronounced the project a success. Two new swing sets were also added.

MDH STUDENTS FROM THE INTERNATIONAL HOSPITALITY AND TOURISM ACADEMY met with officials from the US Department of Agriculture during their recent trip to Washington DC.

Mt. Diablo High School students and leaders in Contra Costa County are audacious enough to believe that food and nutrition is primary to education, not peripheral. Cindy Gershen, Culinary Arts instructor at Mt. Diablo High School, believes that so much that she and 13 students traveled to Washington D.C. to spread the word. The group visited with members of Congress, representatives at the USDA, and shared their innovative curriculum “Pathways to Healthy Living” with Ballou High School,

one of the high schools in the District of Columbia with the highest enrollment. Concord’s Vice Mayor, Laura Hoffmeister, accompanied the group along with other community leaders. “Mt. Diablo High School students believe in sustainable approaches to solving problems such as fixing our food system,” MDHS student and President of the Environmental Club Karina Alvarado said. “We think truly sustainable change only occurs when there is a triple bottom line that serves the interests of business, people and the planet.”

In what is likely to be the closing chapter for San Francisco-based Heald Colleges, the U.S. Department of Education (USDE) last week slapped its parent company, Corinthian Colleges, with a $30 million fine for misrepresenting job placement claims and ordered the school to stop accepting new students. The department said that Heald consistently provided inaccurate information to

Inside For rates, call or visit our websites