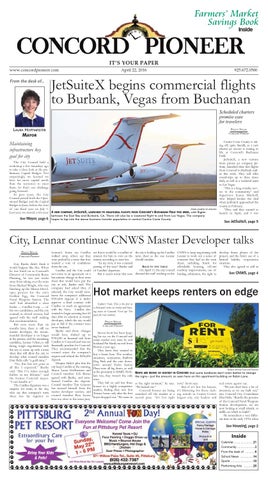 The City Council held a workshop a few Saturdays ago to take a close look at the preliminary Capital Budget. Not surprisingly, we learned we have far more capital needs than the resources to meet them. So that’s our challenge going forward. In past years, the City Council passed both the Operational Budget and the Capital Budget in June, before the start of our fiscal year on July 1. PhoTo CouRTeSy of JeTSuiTeX Last year, we started a two-year a new company, JetsuiteX, launched its inauguRal flights fRom concoRd’s Buchanan field this week, with flights between the east Bay and Burbank, CA. There will also be a weekend flight to and from Las Vegas. The company

Contra Costa County is taking off, quite literally, as a new charter jet service is roaring to life at Concord’s Buchanan Field. JetSuiteX, a new venture from private jet company JetSuite, launched their first flights from Concord to Burbank earlier this week. They will offer round-trips up to three times daily, as well as a weekend jaunt to Las Vegas. “This is a long overdue service to the community,” said Supervisor Karen Mitchoff, who helped broker the deal when JetSuiteX approached the county in February. “They said they wanted to launch in April, and I was

Guy Bjerke didn’t think it would happen like this. When he was hired on as Concord’s Director of Community Reuse Planning, he was just weeks away from taking over the reins from Michael Wright, who was finishing up the Master Developer process for the city’s Golden Egg, the Concord Naval Weapons Station. The staff had identified a clear leader — Catellus Corp. — of the two candidates, and the city council, in closed session, had agreed with the staff making that recommendation. But now, more than six months later, there is still no master developer, the recommended developer is no longer in the picture, and the remaining candidate, Lennar Urban, is still facing tough negotiations with the city to come up with a term sheet that will allow the city to develop what council member Dan Helix calls ”a gold mine.” “No, this has not gone at all like I expected,” Bjerke said. “But I’ve taken enough bullets in my lifetime,” said the former Concord mayor. “I can handle it.” The Catellus departure was a surprise for many in the city, who say that company’s term sheet was far superior to

Lennar’s. Some say Catellus walked away, others say they were pushed by a sense that they wanted a vote of confidence from the city. Catellus and the City could not come to an agreement on a last-minute change in their term sheet that would have put the city at risk, Bjerke said. The company had asked that, if selected, the City would reimburse the company’s additional $350,000 deposit if it didn’t approve a final contract with Catellus or reach an agreement with the Navy. Catellus also wanted to begin accruing fees 60 days after its selection as master developer, which the city would pay in full if the contract were never finalized. Bjerke said those changes would have shifted up to $700,000 in financial risk from Catellus to Concord and was not financially prudent for Concord. They recommended that the council reject the company’s request and refund the $250,000 deposit. Despite Helix’s plea that the city keep Catellus in the running, Mayor Laura Hoffmeister and Council member Edi Birsan agreed with Bjerke, and reimbursed Catellus the deposit. Council member Tim Grayson has recused himself from the master developer section, and council member Ron Leone lives too close to the reuse proj-

ect that it would be a conflict of interest for him to vote on the matter, according to state law. “In my view, it was a mutual parting of the ways” Bjerke said of Catellus’ departure. But it seems ironic that now

the city is holding up the Catellus CNWS to keep negotiating with term sheet as the one Lennar Lennar to work out a series of concerns they had on the term should emulate. sheet, including funds for BACK TO THE TABLE affordable housing, off-site On April 13, the city council roadway improvements, use of directed the staff working on the binding arbitration, the right to

develop future phases of the project, and the firm’s use of a limited liability corporation structure. They also agreed to add in

Hot market keeps renters on edge Editor’s Note: This is the first in a three-part series on rental and housing issues in Concord. Next up: The push for rent controls. PEGGY SPEAR Concord Pioneer

Steven Scott has been keeping his eye on the Concord real estate market ever since he and husband Pat Hardy moved from Boston a year ago. They knew they wanted to buy a home here. The weather, amenities, restaurants, Baldwin Dog Park and the cute downtown around Todos Santos Plaza were all big draws, as well as the proximity to BART. Problem was, they weren’t the only ones. They bid on and lost three houses in a highly competitive market, finding their new Sun Terrace home only after the first buyer dropped out. “We came in

Rents aRe Rising so quickly in concoRd that some landlords don’t even bother to change the signs—just the amount, as seen here on this apartment building on Robin Lane.

at the right moment,” he says. “We lucked out.” Concord houses are being snatched off the market at a record pace. “It’s hot right

now,” Scott says. But if it’s hot for buyers, it’s blistering for those seeking rentals in Contra Costa’s largest city, city leaders and

real estate agents say. “We just don’t have a lot of inventory, as we are built out,” says Concord City Councilman Dan Helix. “Besides the promise of the Concord Naval Weapons Station development, we are now looking at small islands, or infills, on which to build.” He remembers a very different time in the early 1970s when