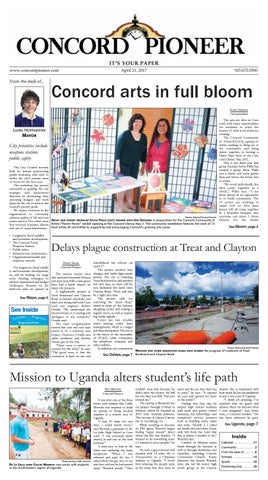 The City Council recently held its annual goal-setting public workshop with staff to define the city’s priority areas of focus for the next year. The workshop has proven successful in guiding the city manager and department directors in developing their operating budgets and work plans for the city to achieve the council’s priority goals. We expect everyone in the organization to constantly Tamara Steiner/Concord Pioneer enhance quality of life and cusA RTIST AND EXHIBIT PRODUCER S YLVIA P HILIS ( LEFT ) CONFERS WITH U NI O RTEGÓN in preparation for the Concord Community of tomer service. Five other areas Artists “Flower Power” exhibit opening at the Concord Library May 2. The community installation features the work of 15 that received extensive discuslocal artists all committed to supporting and encouraging Concord’s growing arts scene. sion are of equal importance: • Long-term fiscal stability and economic development. • The Concord Naval Weapons Station. • Public safety. • Infrastructure maintenance. • Organizational health and employee success.

For long-term fiscal stability and economic development, we will be looking for longterm funding strategies to address operational and budget challenges. Measure Q, the half-cent sales tax passed by

The arts are alive in Concord, with many opportunities for residents to enjoy the bounty of what local artists are creating. The Concord Community of Artists (CCofA), a group of artists working to bring art to the community and bring artists together, is hosting a Flower Power show at the Concord Library May 2-31. This is the third year that group founder Sylvia Philis has curated a group show. Philis sets a theme and some guidelines and leaves the artists free to create. “We work individually, but then come together as a whole,” Philis says. “I see these shows as an opportunity to build community. The 15 artists are working in either 2-D or 3-D; their pieces will all come together in a beautiful bouquet that everyone can enjoy. I chose flowers for the theme

The intense winter rains that sprouted beautiful flowers and kept local hills a lush green have had a harsh impact on many city projects. A high-profile project at Treat Boulevard and Clayton See Mayor, page 6 Road is behind schedule, and that’s not sitting well with Concord city engineer Robert Ovadia. “We understand the inconvenience it is causing and apologize to the residents,” Ovadia said. The road reorganization started last year and was supposed to be a relatively easy project. However, Ovadia says utility problems and Mother Nature got in the way. “There were a variety of reasons for the delay,” he said. “The good news is that the contractor is back on site and

remobilized his efforts on April 3.” The project involves lane changes and traffic light installations. The city is widening Treat Boulevard to add another left turn lane, so there will be two dedicated left turns onto Clayton Road. There will also be a right turn lane. The project calls for removing the “pork chop” island in front of the Safeway shopping center and making a regular curve, as well as replacing traffic signals. Crews ran into trouble when placing utility lines underground, which is a larger job than anticipated. The city is at the mercy of the timetables of PG&E, cable companies, the telephone company and other utilities. In addition, city contractors

WEATHER AND OTHER UNEXPECTED Boulevard and Clayton Road.

the progress of roadwork at Treat

It was after one of his three bouts with malaria that Collin Wenrich was inspired to build an airstrip to bring medical supplies to a remote area of Uganda. “I had IV drips for two days. I could barely move,” says Wenrich, a graduate of De La Salle High School in Concord. “I was extremely dehydrated, in and out of the fetal position.” A man next to him at the clinic was suffering the same symptoms. “When I was released and paid the fee, I asked about the guy next to me and they told me he had passed away,” Wenrich recalls. “They

couldn’t treat him because he didn’t have the money. My bill for two days was $20. That just rocked me.” The airstrip is Wenrich’s latest project through Unified in Mission, which he founded in 2015 with Amanda Johnson. The two met at Liberty University in Lynchburg, Va. While studying to become an FBI agent, Wenrich began feeling “super uneasy” about where his life was headed. “I wanted to do something more – I wanted to serve people,” he says. He took a gap semester and traveled with 14 other 20- to 25-year-olds on a Christian mission to Uganda. “I loved how amazing the people were in the sense that they were so

open and the joy they had was so pure,” he says. “It opened my eyes and opened my heart to the world.” During that first trip, he helped high school students with math and sports, visited nurseries, led fellowships and completed service projects such as building water tanks and wells. “Month 3, I called my family and told them I honestly felt from the Lord that this is where I needed to be,” Wenrich says. Unified in Mission raises funds through the Internet as well as through businesses and churches, including Clayton Community Church. Kristy Johnston has known Wenrich since she led his junior high youth group at the Clayton

church. She is impressed with how much he has accomplished in just a few years in Uganda. “I think it’s amazing. I’ve watched him set goals and achieve them far beyond what I ever imagined,” says Johnston, a Concord resident. “He has favor wherever he goes.