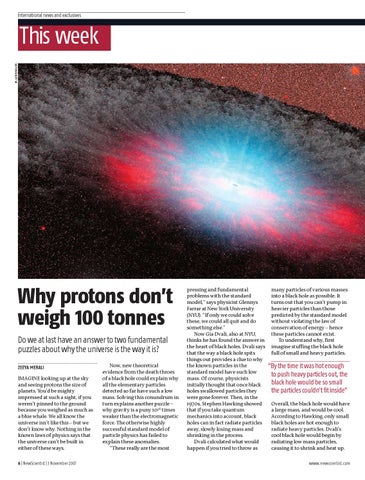 Why protons don’t weigh 100 tonnes Do we at last have an answer to two fundamental puzzles about why the universe is the way it is? Zeeya Merali

IMAGINE looking up at the sky and seeing protons the size of planets. You’d be mighty impressed at such a sight, if you weren’t pinned to the ground because you weighed as much as a blue whale. We all know the universe isn’t like this – but we don’t know why. Nothing in the known laws of physics says that the universe can’t be built in either of these ways.  | NewScientist | 3 November 2007

Now, new theoretical evidence from the death throes of a black hole could explain why all the elementary particles detected so far have such a low mass. Solving this conundrum in turn explains another puzzle – why gravity is a puny 1036 times weaker than the electromagnetic force. The otherwise highly successful standard model of particle physics has failed to explain these anomalies. “These really are the most

pressing and fundamental problems with the standard model,” says physicist Glennys Farrar at New York University (NYU). “If only we could solve these, we could all quit and do something else.” Now Gia Dvali, also at NYU, thinks he has found the answer in the heart of black holes. Dvali says that the way a black hole spits things out provides a clue to why the known particles in the standard model have such low mass. Of course, physicists initially thought that once black holes swallowed particles they were gone forever. Then, in the 1970s, Stephen Hawking showed that if you take quantum mechanics into account, black holes can in fact radiate particles away, slowly losing mass and shrinking in the process. Dvali calculated what would happen if you tried to throw as

many particles of various masses into a black hole as possible. It turns out that you can’t pump in heavier particles than those predicted by the standard model without violating the law of conservation of energy – hence these particles cannot exist. To understand why, first imagine stuffing the black hole full of small and heavy particles.

In this section ● Future poverty hides in city design, page 8 ● Cancer, what not to eat, page 10 ● Ancient roots of self-justification, page 14

observe must be the way that they are,” says Dvali, who presented the work last month at the Arrow of Time conference at Columbia University in New York. In the past, physicists including Dvali himself, have proposed that gravity could be weak because it leaks into extra dimensions of space. Dvali believes that one of the biggest advantages of his idea is that it dispenses with these extra dimensions. “I just consider black holes, which almost everyone agrees exist,” he says. When the Large Hadron Collider starts up next year at CERN near Geneva, Switzerland, Dvali says particle physicists will be able test his theory – if they manage to find mini black holes (MBHs). Some claim that you could spot them as they pass through the Earth by tracking the vibrations they would create (see “Mini black holes fly through Earth…”) If they are found in a particle smasher like the LHC, they will quickly evaporate, spraying new particles out in every direction. Many physicists think these black holes will –Dying black holes hold the answer– provide evidence of extra dimensions. In contrast, Dvali But by the time it was hot enough hopes to see black holes that back up his theory – you could spot to push heavy particles out, Dvali’s calculations show that the them because they would produce black hole would be so small that non-standard particles. As the the heavy particles simply could energy of the accelerator is not fit inside it. In other words, cranked up, they will produce the black hole would be smaller than the particles it holds, creating an obvious paradox. A second facet of Dvali’s theory could explain why gravity is so If a black hole crashed into the Earth, weak. His calculations might rule it wouldn’t be as devastating as you out heavier particles, but they might expect – as long as the black hole also suggest there could be vastly was tiny enough. greater numbers of particles with It’s possible trillions of tiny black a small mass than predicted by holes were created during the big bang, the standard model – as many as and could still be hanging around 1032 greater, all close copies of the today. So far, though, nobody has found particles we can observe, but not any evidence for them. Iosif Khriplovich interacting with them, except at Novosibirsk State University in Russia through gravity. Dvali says that if and his colleagues decided to calculate gravity were “smeared out” over whether we could detect such a black these particles, gravity would be hole if it passed through the Earth. weakened to exactly the value we “First we wanted to know, would they experience it. “At last, we see why cause severe damage?” the particles and forces we

more and more of them. “My black holes gradually become more democratic,” says Dvali. “They stop favouring standard model particles, and start decaying into all types.” Laura Mersini-Houghton, a cosmologist at the University of North Carolina at Chapel Hill is impressed by Dvali’s theory. “This is a beautiful and intriguing solution to a huge problem in

“Black holes gradually become more democratic. They start decaying into all types of particles” physics,” she says. But she cautions that black holes are still not fully understood and must be studied in more depth before the ideas can be accepted. Physicist Paul Davies at Arizona State University in Tempe likes the idea. “It is a fascinating conjecture that the structure of space-time might tell us something important about particle physics.” Davies also welcomes the fact that the theory can be tested at the LHC. But he cautions that hypothesising 1032 unknown particle species is “rather extravagant”. “I would imagine that if this vast population of particle species really exists it would have profound implications for the big bang,” he says. Farrar agrees, but says the calculations are sound. “Few

physicists will be comfortable with the need for all these extra particles, but it follows logically from the consideration of black holes,” she says. “This is terrific and will give us a powerful new tool for analysing particle physics.” Dvali concedes the extra particles should have a noticeable effect, which he says we may have already spotted. His calculations suggest that the extra particles have the right density to make up dark matter. “It’s an intriguing possibility,” he says. If this were true, it would throw up some pretty way-out consequences. Since the quarks and electrons in each of the 1032 copies of the standard model particles could interact with each other, they could form their own atoms, chemical, elements, and even living organisms. “The probability will be small, but there could certainly be dark matter galaxies out there somewhere in our infinite universe, with their own dark matter planets and possibly their own forms of dark matter life,” says Dvali. Sadly, we could never see these dark matter worlds and civilisations directly because they would be made up of particles that could not interact with our photons. Just as they are hidden from us, we would also be hidden from them, explains Dvali. “To them, we are the dark matter,” he says. l

Mini black holes fly through earth with THE greatest of ease

Thankfully, the answer is no. The team calculated that although the mini black hole (MBH) could melt material along its path as it burrowed through the planet, because it is so small, the effects would be barely noticeable. However, we could pick up the sound of the passing MBH, as it sets the planet vibrating. If it was moving faster than the speed of sound inside the Earth, it would create a cone-shaped shock wave as it moved, explains Khriplovich. Combined with the radiation created as the decaying black hole emits particles, the process would release about 108

joules of energy – about 10,000 times less energy than that released by an underground atomic bomb (www.arxiv. org/abs/0710.3438). The team have calculated the frequency range for these vibrations – which should be detectable by seismic detectors. “I’m not asking for anybody to invest hundreds of millions of dollars to try and pick up signs of this, but I am calling on geophysicists to reassess the seismic data that they have already collected,” says Khriplovich. “We may already have seen one of these mini black holes without realising.” 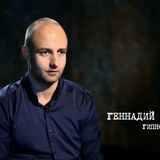