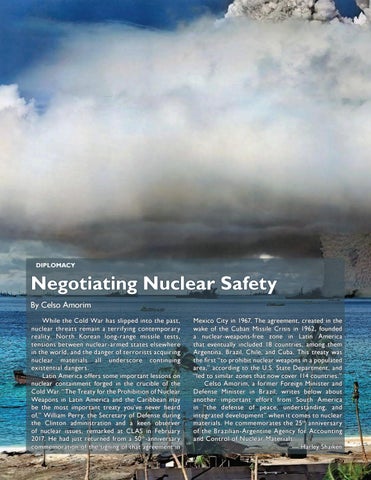 Negotiating Nuclear Safety By Celso Amorim While the Cold War has slipped into the past, nuclear threats remain a terrifying contemporary reality. North Korean long-range missile tests, tensions between nuclear-armed states elsewhere in the world, and the danger of terrorists acquiring nuclear materials all underscore continuing existential dangers. Latin America offers some important lessons on nuclear containment forged in the crucible of the Cold War. “The Treaty for the Prohibition of Nuclear Weapons in Latin America and the Caribbean may be the most important treaty you’ve never heard of,” William Perry, the Secretary of Defense during the Clinton administration and a keen observer of nuclear issues, remarked at CLAS in February 2017. He had just returned from a 50 th -anniversary commemoration of the signing of that agreement in BERKELEY REVIEW OF LATIN AMERICAN STUDIES

Mexico City in 1967. The agreement, created in the wake of the Cuban Missile Crisis in 1962, founded a nuclear-weapons-free zone in Latin America that eventually included 18 countries, among them Argentina, Brazil, Chile, and Cuba. This treaty was the first “to prohibit nuclear weapons in a populated area,” according to the U.S. State Department, and “led to similar zones that now cover 114 countries.” Celso Amorim, a former Foreign Minister and Defense Minister in Brazil, writes below about another important effort from South America in “the defense of peace, understanding, and integrated development” when it comes to nuclear materials. He commemorates the 25 th anniversary of the Brazilian-Argentine Agency for Accounting and Control of Nuclear Materials. — Harley Shaiken