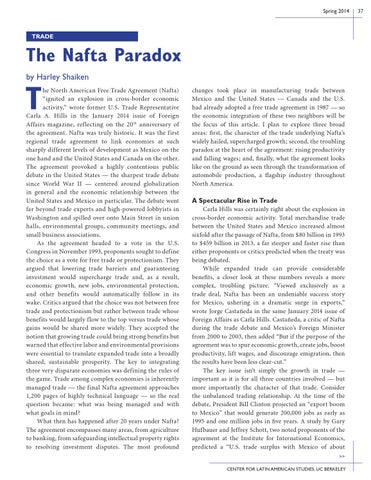 The Nafta Paradox by Harley Shaiken

he North American Free Trade Agreement (Nafta) “ignited an explosion in cross-border economic activity,” wrote former U.S. Trade Representative Carla A. Hills in the January 2014 issue of Foreign Affairs magazine, ref lecting on the 20 th anniversary of the agreement. Nafta was truly historic. It was the first regional trade agreement to link economies at such sharply different levels of development as Mexico on the one hand and the United States and Canada on the other. The agreement provoked a highly contentious public debate in the United States — the sharpest trade debate since World War II — centered around globalization in general and the economic relationship between the United States and Mexico in particular. The debate went far beyond trade experts and high-powered lobbyists in Washington and spilled over onto Main Street in union halls, environmental groups, community meetings, and small business associations. As the agreement headed to a vote in the U.S. Congress in November 1993, proponents sought to define the choice as a vote for free trade or protectionism. They argued that lowering trade barriers and guaranteeing investment would supercharge trade and, as a result, economic growth, new jobs, environmental protection, and other benefits would automatically follow in its wake. Critics argued that the choice was not between free trade and protectionism but rather between trade whose benefits would largely f low to the top versus trade whose gains would be shared more widely. They accepted the notion that growing trade could bring strong benefits but warned that effective labor and environmental provisions were essential to translate expanded trade into a broadly shared, sustainable prosperity. The key to integrating three very disparate economies was defining the rules of the game. Trade among complex economies is inherently managed trade — the final Nafta agreement approaches 1,200 pages of highly technical language — so the real question became: what was being managed and with what goals in mind? What then has happened after 20 years under Nafta? The agreement encompasses many areas, from agriculture to banking, from safeguarding intellectual property rights to resolving investment disputes. The most profound

changes took place in manufacturing trade between Mexico and the United States — Canada and the U.S. had already adopted a free trade agreement in 1987 — so the economic integration of these two neighbors will be the focus of this article. I plan to explore three broad areas: first, the character of the trade underlying Nafta’s widely hailed, supercharged growth; second, the troubling paradox at the heart of the agreement: rising productivity and falling wages; and, finally, what the agreement looks like on the ground as seen through the transformation of automobile production, a flagship industry throughout North America. A Spectacular Rise in Trade Carla Hills was certainly right about the explosion in cross-border economic activity. Total merchandise trade between the United States and Mexico increased almost sixfold after the passage of Nafta, from $80 billion in 1993 to $459 billion in 2013, a far steeper and faster rise than either proponents or critics predicted when the treaty was being debated. While expanded trade can provide considerable benefits, a closer look at these numbers reveals a more complex, troubling picture. “Viewed exclusively as a trade deal, Nafta has been an undeniable success story for Mexico, ushering in a dramatic surge in exports,” wrote Jorge Castañeda in the same January 2014 issue of Foreign Affairs as Carla Hills. Castañeda, a critic of Nafta during the trade debate and Mexico’s Foreign Minister from 2000 to 2003, then added “But if the purpose of the agreement was to spur economic growth, create jobs, boost productivity, lift wages, and discourage emigration, then the results have been less clear-cut.” The key issue isn’t simply the growth in trade — important as it is for all three countries involved — but more importantly the character of that trade. Consider the unbalanced trading relationship. At the time of the debate, President Bill Clinton projected an “export boom to Mexico” that would generate 200,000 jobs as early as 1995 and one million jobs in five years. A study by Gary Hufbauer and Jeffrey Schott, two noted proponents of the agreement at the Institute for International Economics, predicted a “U.S. trade surplus with Mexico of about >> CENTER FOR LATIN AMERICAN STUDIES, UC BERKELEY