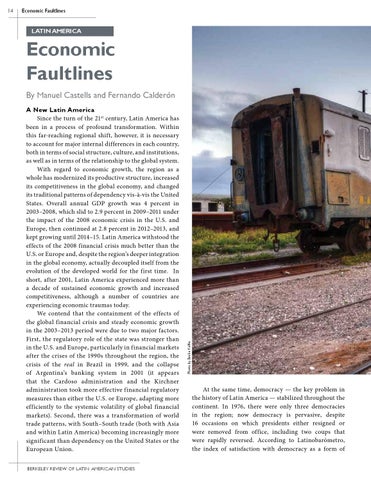 Economic Faultlines By Manuel Castells and Fernando Calderón A New Latin America Since the turn of the 21st century, Latin America has been in a process of profound transformation. Within this far-reaching regional shift, however, it is necessary to account for major internal differences in each country, both in terms of social structure, culture, and institutions, as well as in terms of the relationship to the global system. With regard to economic growth, the region as a whole has modernized its productive structure, increased its competitiveness in the global economy, and changed its traditional patterns of dependency vis-à-vis the United States. Overall annual GDP growth was 4 percent in 2003–2008, which slid to 2.9 percent in 2009–2011 under the impact of the 2008 economic crisis in the U.S. and Europe, then continued at 2.8 percent in 2012–2013, and kept growing until 2014–15. Latin America withstood the effects of the 2008 financial crisis much better than the U.S. or Europe and, despite the region’s deeper integration in the global economy, actually decoupled itself from the evolution of the developed world for the first time. In short, after 2001, Latin America experienced more than a decade of sustained economic growth and increased competitiveness, although a number of countries are experiencing economic traumas today. We contend that the containment of the effects of the global financial crisis and steady economic growth in the 2003–2013 period were due to two major factors. First, the regulatory role of the state was stronger than in the U.S. and Europe, particularly in financial markets after the crises of the 1990s throughout the region, the crisis of the real in Brazil in 1999, and the collapse of Argentina’s banking system in 2001 (it appears that the Cardoso administration and the Kirchner administration took more effective financial regulatory measures than either the U.S. or Europe, adapting more efficiently to the systemic volatility of global financial markets). Second, there was a transformation of world trade patterns, with South–South trade (both with Asia and within Latin America) becoming increasingly more significant than dependency on the United States or the European Union. BERKELEY REVIEW OF LATIN AMERICAN STUDIES

At the same time, democracy — the key problem in the history of Latin America — stabilized throughout the continent. In 1976, there were only three democracies in the region; now democracy is pervasive, despite 16 occasions on which presidents either resigned or were removed from office, including two coups that were rapidly reversed. According to Latinobarómetro, the index of satisfaction with democracy as a form of