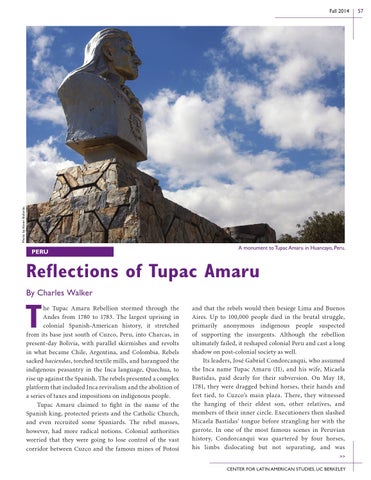 A monument to Tupac Amaru in Huancayo, Peru.

he Tupac Amaru Rebellion stormed through the Andes from 1780 to 1783. The largest uprising in colonial Spanish-American history, it stretched from its base just south of Cuzco, Peru, into Charcas, in present-day Bolivia, with parallel skirmishes and revolts in what became Chile, Argentina, and Colombia. Rebels sacked haciendas, torched textile mills, and harangued the indigenous peasantry in the Inca language, Quechua, to rise up against the Spanish. The rebels presented a complex platform that included Inca revivalism and the abolition of a series of taxes and impositions on indigenous people. Tupac Amaru claimed to fight in the name of the Spanish king, protected priests and the Catholic Church, and even recruited some Spaniards. The rebel masses, however, had more radical notions. Colonial authorities worried that they were going to lose control of the vast corridor between Cuzco and the famous mines of Potosí

and that the rebels would then besiege Lima and Buenos Aires. Up to 100,000 people died in the brutal struggle, primarily anonymous indigenous people suspected of supporting the insurgents. Although the rebellion ultimately failed, it reshaped colonial Peru and cast a long shadow on post-colonial society as well. Its leaders, José Gabriel Condorcanqui, who assumed the Inca name Tupac Amaru (II), and his wife, Micaela Bastidas, paid dearly for their subversion. On May 18, 1781, they were dragged behind horses, their hands and feet tied, to Cuzco’s main plaza. There, they witnessed the hanging of their eldest son, other relatives, and members of their inner circle. Executioners then slashed Micaela Bastidas’ tongue before strangling her with the garrote. In one of the most famous scenes in Peruvian history, Condorcanqui was quartered by four horses, his limbs dislocating but not separating, and was >> CENTER FOR LATIN AMERICAN STUDIES, UC BERKELEY