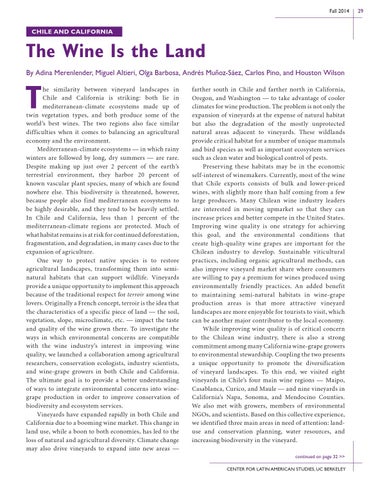 he similarity between vineyard landscapes in Chile and California is striking: both lie in mediterranean-climate ecosystems made up of twin vegetation types, and both produce some of the world’s best wines. The two regions also face similar difficulties when it comes to balancing an agricultural economy and the environment. Mediterranean-climate ecosystems — in which rainy winters are followed by long, dry summers — are rare. Despite making up just over 2 percent of the earth’s terrestrial environment, they harbor 20 percent of known vascular plant species, many of which are found nowhere else. This biodiversity is threatened, however, because people also find mediterranean ecosystems to be highly desirable, and they tend to be heavily settled. In Chile and California, less than 1 percent of the mediterranean-climate regions are protected. Much of what habitat remains is at risk for continued deforestation, fragmentation, and degradation, in many cases due to the expansion of agriculture. One way to protect native species is to restore agricultural landscapes, transforming them into seminatural habitats that can support wildlife. Vineyards provide a unique opportunity to implement this approach because of the traditional respect for terroir among wine lovers. Originally a French concept, terroir is the idea that the characteristics of a specific piece of land — the soil, vegetation, slope, microclimate, etc. — impact the taste and quality of the wine grown there. To investigate the ways in which environmental concerns are compatible with the wine industry’s interest in improving wine quality, we launched a collaboration among agricultural researchers, conservation ecologists, industry scientists, and wine-grape growers in both Chile and California. The ultimate goal is to provide a better understanding of ways to integrate environmental concerns into winegrape production in order to improve conservation of biodiversity and ecosystem services. Vineyards have expanded rapidly in both Chile and California due to a booming wine market. This change in land use, while a boon to both economies, has led to the loss of natural and agricultural diversity. Climate change may also drive vineyards to expand into new areas —

farther south in Chile and farther north in California, Oregon, and Washington — to take advantage of cooler climates for wine production. The problem is not only the expansion of vineyards at the expense of natural habitat but also the degradation of the mostly unprotected natural areas adjacent to vineyards. These wildlands provide critical habitat for a number of unique mammals and bird species as well as important ecosystem services such as clean water and biological control of pests. Preserving these habitats may be in the economic self-interest of winemakers. Currently, most of the wine that Chile exports consists of bulk and lower-priced wines, with slightly more than half coming from a few large producers. Many Chilean wine industry leaders are interested in moving upmarket so that they can increase prices and better compete in the United States. Improving wine quality is one strategy for achieving this goal, and the environmental conditions that create high-quality wine grapes are important for the Chilean industry to develop. Sustainable viticultural practices, including organic agricultural methods, can also improve vineyard market share where consumers are willing to pay a premium for wines produced using environmentally friendly practices. An added benefit to maintaining semi-natural habitats in wine-grape production areas is that more attractive vineyard landscapes are more enjoyable for tourists to visit, which can be another major contributor to the local economy. While improving wine quality is of critical concern to the Chilean wine industry, there is also a strong commitment among many California wine-grape growers to environmental stewardship. Coupling the two presents a unique opportunity to promote the diversification of vineyard landscapes. To this end, we visited eight vineyards in Chile’s four main wine regions — Maipo, Casablanca, Curico, and Maule — and nine vineyards in California’s Napa, Sonoma, and Mendocino Counties. We also met with growers, members of environmental NGOs, and scientists. Based on this collective experience, we identified three main areas in need of attention: landuse and conservation planning, water resources, and increasing biodiversity in the vineyard. continued on page 32 >> CENTER FOR LATIN AMERICAN STUDIES, UC BERKELEY