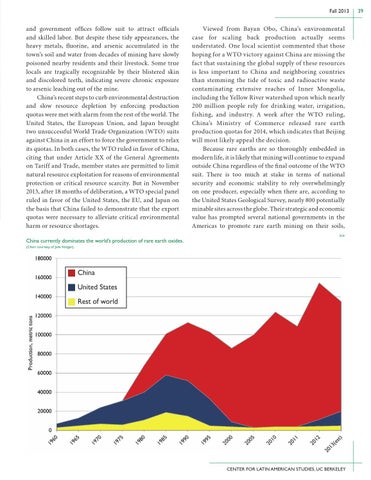 and government offices follow suit to attract officials and skilled labor. But despite these tidy appearances, the heavy metals, fluorine, and arsenic accumulated in the town’s soil and water from decades of mining have slowly poisoned nearby residents and their livestock. Some true locals are tragically recognizable by their blistered skin and discolored teeth, indicating severe chronic exposure to arsenic leaching out of the mine. China’s recent steps to curb environmental destruction and slow resource depletion by enforcing production quotas were met with alarm from the rest of the world. The United States, the European Union, and Japan brought two unsuccessful World Trade Organization (WTO) suits against China in an effort to force the government to relax its quotas. In both cases, the WTO ruled in favor of China, citing that under Article XX of the General Agreements on Tariff and Trade, member states are permitted to limit natural resource exploitation for reasons of environmental protection or critical resource scarcity. But in November 2013, after 18 months of deliberation, a WTO special panel ruled in favor of the United States, the EU, and Japan on the basis that China failed to demonstrate that the export quotas were necessary to alleviate critical environmental harm or resource shortages. China currently dominates the world’s production of rare earth oxides.

Viewed from Bayan Obo, China’s environmental case for scaling back production actually seems understated. One local scientist commented that those hoping for a WTO victory against China are missing the fact that sustaining the global supply of these resources is less important to China and neighboring countries than stemming the tide of toxic and radioactive waste contaminating extensive reaches of Inner Mongolia, including the Yellow River watershed upon which nearly 200 million people rely for drinking water, irrigation, fishing, and industry. A week after the WTO ruling, China’s Ministry of Commerce released rare earth production quotas for 2014, which indicates that Beijing will most likely appeal the decision. Because rare earths are so thoroughly embedded in modern life, it is likely that mining will continue to expand outside China regardless of the final outcome of the WTO suit. There is too much at stake in terms of national security and economic stability to rely overwhelmingly on one producer, especially when there are, according to the United States Geological Survey, nearly 800 potentially minable sites across the globe. Their strategic and economic value has prompted several national governments in the Americas to promote rare earth mining on their soils, >>