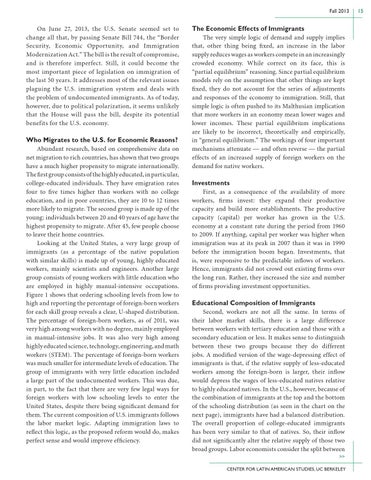 On June 27, 2013, the U.S. Senate seemed set to change all that, by passing Senate Bill 744, the “Border Security, Economic Opportunity, and Immigration Modernization Act.” The bill is the result of compromise, and is therefore imperfect. Still, it could become the most important piece of legislation on immigration of the last 50 years. It addresses most of the relevant issues plaguing the U.S. immigration system and deals with the problem of undocumented immigrants. As of today, however, due to political polarization, it seems unlikely that the House will pass the bill, despite its potential benefits for the U.S. economy. Who Migrates to the U.S. for Economic Reasons? Abundant research, based on comprehensive data on net migration to rich countries, has shown that two groups have a much higher propensity to migrate internationally. The first group consists of the highly educated, in particular, college-educated individuals. They have emigration rates four to five times higher than workers with no college education, and in poor countries, they are 10 to 12 times more likely to migrate. The second group is made up of the young: individuals between 20 and 40 years of age have the highest propensity to migrate. After 45, few people choose to leave their home countries. Looking at the United States, a very large group of immigrants (as a percentage of the native population with similar skills) is made up of young, highly educated workers, mainly scientists and engineers. Another large group consists of young workers with little education who are employed in highly manual-intensive occupations. Figure 1 shows that ordering schooling levels from low to high and reporting the percentage of foreign-born workers for each skill group reveals a clear, U-shaped distribution. The percentage of foreign-born workers, as of 2011, was very high among workers with no degree, mainly employed in manual-intensive jobs. It was also very high among highly educated science, technology, engineering, and math workers (STEM). The percentage of foreign-born workers was much smaller for intermediate levels of education. The group of immigrants with very little education included a large part of the undocumented workers. This was due, in part, to the fact that there are very few legal ways for foreign workers with low schooling levels to enter the United States, despite there being significant demand for them. The current composition of U.S. immigrants follows the labor market logic. Adapting immigration laws to reflect this logic, as the proposed reform would do, makes perfect sense and would improve efficiency.

The Economic Effects of Immigrants The very simple logic of demand and supply implies that, other thing being fixed, an increase in the labor supply reduces wages as workers compete in an increasingly crowded economy. While correct on its face, this is “partial equilibrium” reasoning. Since partial equilibrium models rely on the assumption that other things are kept fixed, they do not account for the series of adjustments and responses of the economy to immigration. Still, that simple logic is often pushed to its Malthusian implication that more workers in an economy mean lower wages and lower incomes. These partial equilibrium implications are likely to be incorrect, theoretically and empirically, in “general equilibrium.” The workings of four important mechanisms attenuate — and often reverse — the partial effects of an increased supply of foreign workers on the demand for native workers. Investments First, as a consequence of the availability of more workers, firms invest: they expand their productive capacity and build more establishments. The productive capacity (capital) per worker has grown in the U.S. economy at a constant rate during the period from 1960 to 2009. If anything, capital per worker was higher when immigration was at its peak in 2007 than it was in 1990 before the immigration boom began. Investments, that is, were responsive to the predictable inflows of workers. Hence, immigrants did not crowd out existing firms over the long run. Rather, they increased the size and number of firms providing investment opportunities. Educational Composition of Immigrants Second, workers are not all the same. In terms of their labor market skills, there is a large difference between workers with tertiary education and those with a secondary education or less. It makes sense to distinguish between these two groups because they do different jobs. A modified version of the wage-depressing effect of immigrants is that, if the relative supply of less-educated workers among the foreign-born is larger, their inflow would depress the wages of less-educated natives relative to highly educated natives. In the U.S., however, because of the combination of immigrants at the top and the bottom of the schooling distribution (as seen in the chart on the next page), immigrants have had a balanced distribution. The overall proportion of college-educated immigrants has been very similar to that of natives. So, their inflow did not significantly alter the relative supply of those two broad groups. Labor economists consider the split between >> CENTER FOR LATIN AMERICAN STUDIES, UC BERKELEY