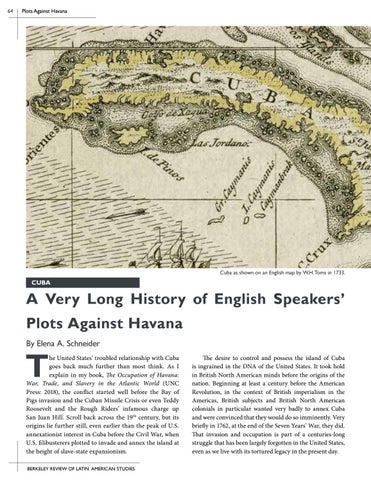 A Very Long History of English Speakers’ Plots Against Havana By Elena A. Schneider

he United States’ troubled relationship with Cuba goes back much further than most think. As I explain in my book, The Occupation of Havana: War, Trade, and Slavery in the Atlantic World (UNC Press: 2018), the conflict started well before the Bay of Pigs invasion and the Cuban Missile Crisis or even Teddy Roosevelt and the Rough Riders’ infamous charge up San Juan Hill. Scroll back across the 19th century, but its origins lie further still, even earlier than the peak of U.S. annexationist interest in Cuba before the Civil War, when U.S. filibusterers plotted to invade and annex the island at the height of slave-state expansionism. BERKELEY REVIEW OF LATIN AMERICAN STUDIES

The desire to control and possess the island of Cuba is ingrained in the DNA of the United States. It took hold in British North American minds before the origins of the nation. Beginning at least a century before the American Revolution, in the context of British imperialism in the Americas, British subjects and British North American colonials in particular wanted very badly to annex Cuba and were convinced that they would do so imminently. Very briefly in 1762, at the end of the Seven Years’ War, they did. That invasion and occupation is part of a centuries-long struggle that has been largely forgotten in the United States, even as we live with its tortured legacy in the present day.