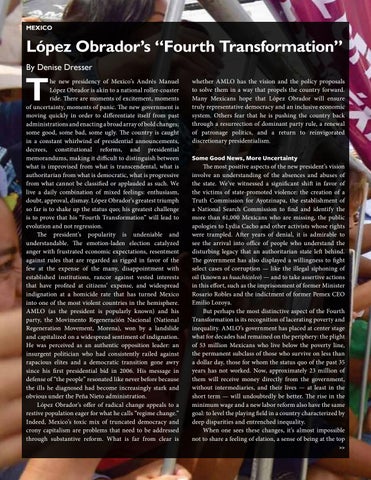 he new presidency of Mexico’s Andrés Manuel López Obrador is akin to a national roller-coaster ride. There are moments of excitement, moments of uncertainty, moments of panic. The new government is moving quickly in order to differentiate itself from past administrations and enacting a broad array of bold changes; some good, some bad, some ugly. The country is caught in a constant whirlwind of presidential announcements, decrees, constitutional reforms, and presidential memorandums, making it difficult to distinguish between what is improvised from what is transcendental, what is authoritarian from what is democratic, what is progressive from what cannot be classified or applauded as such. We live a daily combination of mixed feelings: enthusiasm, doubt, approval, dismay. López Obrador’s greatest triumph so far is to shake up the status quo; his greatest challenge is to prove that his “Fourth Transformation” will lead to evolution and not regression. The president’s popularity is undeniable and understandable. The emotion-laden election catalyzed anger with frustrated economic expectations, resentment against rules that are regarded as rigged in favor of the few at the expense of the many, disappointment with established institutions, rancor against vested interests that have profited at citizens’ expense, and widespread indignation at a homicide rate that has turned Mexico into one of the most violent countries in the hemisphere. AMLO (as the president is popularly known) and his party, the Movimento Regeneración Nacional (National Regeneration Movement, Morena), won by a landslide and capitalized on a widespread sentiment of indignation. He was perceived as an authentic opposition leader: an insurgent politician who had consistently railed against rapacious elites and a democratic transition gone awry since his first presidential bid in 2006. His message in defense of “the people” resonated like never before because the ills he diagnosed had become increasingly stark and obvious under the Peña Nieto administration. López Obrador’s offer of radical change appeals to a restive population eager for what he calls “regime change.” Indeed, Mexico’s toxic mix of truncated democracy and crony capitalism are problems that need to be addressed through substantive reform. What is far from clear is

whether AMLO has the vision and the policy proposals to solve them in a way that propels the country forward. Many Mexicans hope that López Obrador will ensure truly representative democracy and an inclusive economic system. Others fear that he is pushing the country back through a resurrection of dominant party rule, a renewal of patronage politics, and a return to reinvigorated discretionary presidentialism. Some Good News, More Uncertainty The most positive aspects of the new president’s vision involve an understanding of the absences and abuses of the state. We’ve witnessed a significant shift in favor of the victims of state-promoted violence: the creation of a Truth Commission for Ayotzinapa, the establishment of a National Search Commission to find and identify the more than 61,000 Mexicans who are missing, the public apologies to Lydia Cacho and other activists whose rights were trampled. After years of denial, it is admirable to see the arrival into office of people who understand the disturbing legacy that an authoritarian state left behind. The government has also displayed a willingness to fight select cases of corruption — like the illegal siphoning of oil (known as huachicoleo) — and to take assertive actions in this effort, such as the imprisonment of former Minister Rosario Robles and the indictment of former Pemex CEO Emilio Lozoya. But perhaps the most distinctive aspect of the Fourth Transformation is its recognition of lacerating poverty and inequality. AMLO’s government has placed at center stage what for decades had remained on the periphery: the plight of 53 million Mexicans who live below the poverty line, the permanent subclass of those who survive on less than a dollar day, those for whom the status quo of the past 35 years has not worked. Now, approximately 23 million of them will receive money directly from the government, without intermediaries, and their lives — at least in the short term — will undoubtedly be better. The rise in the minimum wage and a new labor reform also have the same goal: to level the playing field in a country characterized by deep disparities and entrenched inequality. When one sees these changes, it’s almost impossible not to share a feeling of elation, a sense of being at the top >>