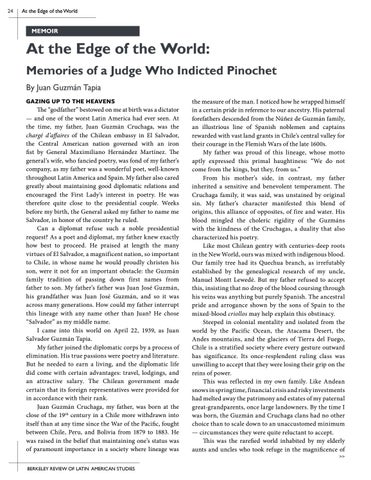 At the Edge of the World

At the Edge of the World: Memories of a Judge Who Indicted Pinochet By Juan Guzmán Tapia GAZING UP TO THE HEAVENS The “godfather” bestowed on me at birth was a dictator — and one of the worst Latin America had ever seen. At the time, my father, Juan Guzmán Cruchaga, was the chargé d’affaires of the Chilean embassy in El Salvador, the Central American nation governed with an iron fist by General Maximiliano Hernández Martínez. The general’s wife, who fancied poetry, was fond of my father’s company, as my father was a wonderful poet, well-known throughout Latin America and Spain. My father also cared greatly about maintaining good diplomatic relations and encouraged the First Lady’s interest in poetry. He was therefore quite close to the presidential couple. Weeks before my birth, the General asked my father to name me Salvador, in honor of the country he ruled. Can a diplomat refuse such a noble presidential request? As a poet and diplomat, my father knew exactly how best to proceed. He praised at length the many virtues of El Salvador, a magnificent nation, so important to Chile, in whose name he would proudly christen his son, were it not for an important obstacle: the Guzmán family tradition of passing down first names from father to son. My father’s father was Juan José Guzmán, his grandfather was Juan José Guzmán, and so it was across many generations. How could my father interrupt this lineage with any name other than Juan? He chose “Salvador” as my middle name. I came into this world on April 22, 1939, as Juan Salvador Guzmán Tapia. My father joined the diplomatic corps by a process of elimination. His true passions were poetry and literature. But he needed to earn a living, and the diplomatic life did come with certain advantages: travel, lodgings, and an attractive salary. The Chilean government made certain that its foreign representatives were provided for in accordance with their rank. Juan Guzmán Cruchaga, my father, was born at the close of the 19th century in a Chile more withdrawn into itself than at any time since the War of the Pacific, fought between Chile, Peru, and Bolivia from 1879 to 1883. He was raised in the belief that maintaining one’s status was of paramount importance in a society where lineage was

the measure of the man. I noticed how he wrapped himself in a certain pride in reference to our ancestry. His paternal forefathers descended from the Núñez de Guzmán family, an illustrious line of Spanish noblemen and captains rewarded with vast land grants in Chile’s central valley for their courage in the Flemish Wars of the late 1600s. My father was proud of this lineage, whose motto aptly expressed this primal haughtiness: “We do not come from the kings, but they, from us.” From his mother’s side, in contrast, my father inherited a sensitive and benevolent temperament. The Cruchaga family, it was said, was unstained by original sin. My father’s character manifested this blend of origins, this alliance of opposites, of fire and water. His blood mingled the choleric rigidity of the Guzmáns with the kindness of the Cruchagas, a duality that also characterized his poetry. Like most Chilean gentry with centuries-deep roots in the New World, ours was mixed with indigenous blood. Our family tree had its Quechua branch, as irrefutably established by the genealogical research of my uncle, Manuel Montt Lewedé. But my father refused to accept this, insisting that no drop of the blood coursing through his veins was anything but purely Spanish. The ancestral pride and arrogance shown by the sons of Spain to the mixed-blood criollos may help explain this obstinacy. Steeped in colonial mentality and isolated from the world by the Pacific Ocean, the Atacama Desert, the Andes mountains, and the glaciers of Tierra del Fuego, Chile is a stratified society where every gesture outward has significance. Its once-resplendent ruling class was unwilling to accept that they were losing their grip on the reins of power. This was reflected in my own family. Like Andean snows in springtime, financial crisis and risky investments had melted away the patrimony and estates of my paternal great-grandparents, once large landowners. By the time I was born, the Guzmán and Cruchaga clans had no other choice than to scale down to an unaccustomed minimum — circumstances they were quite reluctant to accept. This was the rarefied world inhabited by my elderly aunts and uncles who took refuge in the magnificence of >>