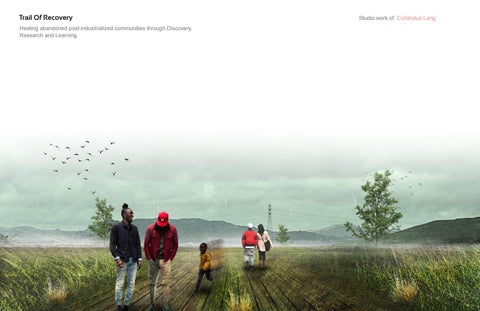 Thesis Statement: Cities that were once a symbol of positive development in industrial communities, such as Richmond, CA have now become distressed communities through urban decay, isolation and pollution by the very source of its economic growth. Several revitalization measures have been made to address these issues by way of breaking barriers, branching communities and re purposing industrial sites.

Focus of the efforts have been mostly economic rather than addressing the direct needs of its people and its community. Instead of creating more shopping centers and â&#x20AC;&#x153;Main Streetsâ&#x20AC;?, the new facility attempts to create a place that will house educational and innovative workshops that will contribute to the health and wellness of the community and re-connect society and nature back together.

Concept: A concept was developed by utilizing access to an existing trail and site topography that allowed the connection between nearby communities to converge in a public zone where the learning aspect of community building and development can thrive.

. Incorporated in August, 7th 1905 . Sits on the shoreline of San Pablo Bay and east of the San Francisco Bay Area . Borders the cities of San Pablo, El Cerrito and Pinole . The Ohlone were the first inhabitants of the Richmond area . Carved out of the Rancho San Pablo that was originally part of the city, San Pablo . Rich history of ship yards, industrial warehouses and oil production

These were seven major shipbuilding yards located on the United States west coast during World War II. The Kaiser shipyards were ranked 20th among U.S. of there persistence in wartime production contracts.

Ford Assembly Plant (known as Craneway Pavillion) This was the largest assembly plant ever built on the west coast. Was a major framework for the local economy during that time, the warehouse also transformed to aide with the current efforts of World War ii, it was built in 1930 during the great depression, a major development in Richmondâ&#x20AC;&#x2122;s harbor and port plan.

Standard Oil (known as Cheveron-Texaco) The refinery was established as standard oil long before the city was incorporated in 1905. The construction on the refinery began in 1901 on a 600 Acre area within the portero San Pablo hills. This new site would accommodate a new pipeline terminal railroad settlement and a east yard formally known now as Point Richmond. This will also be the a contributor to the overall wellness of Richmond later in the years to come.

The city of Richmond was once an industrial economic center during WW2, thriving in companies, such as, Kaiser Shipyards, Ford Assembly Plant and Chevron-Texaco Refinery, formally known as Standard oil. Since then, these companies have stopped operation, gone out of business or have taken there business elsewhere. This leads to a stark contrast of low employment, minor city revenue and low urban development. The Refinery is the cities main framework of commerce such as petroleum based products. Such production of petroleum has dire effects, such as air pollution, hazards waste and contamination. But the big picture is what will happen to the city once the usage of petroleum runs out? What will the city do to abandoned industrial sites once production ceases? This caused a major urban development issue and its causing residents to move elsewhere. This economic downturn has lead to urban decay and isolation of communities such as North Richmond. From this project, the goal is to blur these boundaries of isolation and bridge communities back together and to eventually re-purpose industrial sites that will become abandoned in the near future.

Richmond, Ca in its heyday, economic boom in the 1950s, downtown Richmond O2

The city at it is known today in 2008, looking at the community with Chevron Refinery in the background

A resident riding through the streets of North Richmond,where

Urban debris left behind within the community

Consistent presence of authorities in these communities create an illusion of

Major issues of pollution bellowing from nearby refineries

Seperation and disconnection due to insfrastructre, such as train

that effect communities health and well being.

This mapping indicates the overall air pollution that is distrusted across the north bay as a result of wind flow from the western direction toward the east. We see

Refineryâ&#x20AC;&#x2122;s are a major contributor to air pollution within the Bay area primordially with Richmond being the heart of the problem. With the addition of exhaust from motor vehicles adds another layer of issues to the matter.

How industrial sprawl is effecting the city fabric

With Opportunity, what I envision for communities of Richmond, is to allow nature to draw them back to the Terrain Vague of nature, a place where the community can reclaim back.

To approach these concerns by breaking boundaries, restore connections to nature and to Regenerate industrial sites to habitable zones for community dwellers.

The users of this idea, such as city residents, adjacent communities and professionals will be able to converge within spaces, dedicated to educational systems such as classrooms, lectures, workshops. To also include innovative spaces for the research of renewable resources, sustainable development and urban renewal.

From this experience will render a positive outcome for both community and innovators that will harness social and economical progression that will become a beacon for future development of health and wellness for communities locally and worldwide.

Connect back to Nature

What site within the city which will serve as a major impact for this project? In order to identify a potential site, certain criteria must be established to set a series of parameters that the thesis is composed of, that being the site must: be able to break barriers by way of infrastructure, allow passage to the nearby waterfront of Richmond and experience the essence of nature, and allow the re-purposing of industrial sites, such as Chevron refinery and other nearby industrial companies. And the site must be next to a major transportation artery.

From parking area, looking toward the site

Natural habitat areas around the site

Intangiable (heart and lung concept) The intangible part of this diagram describes the site as the heart of the matter and nature is where the fresh oxygen is, so by trying to draw nature into the site by pumping th oxygen into the terrain vague spaces and allowing these spaces to heal over time

A concept model was developed from how land can form spaces through adulation. A layer is spread over terrain vague areas allowing the land to undulate into pockets forming spaces where nature and building can stitch together.

The diagram explains a simple gesture of simply reversing a buildings orientation from parallel to perpendicular. This allows the concept of breaking barriers of not creating a building frontage that blocks access from the street, instead opens this passage up and allows passage through.

From this ideation, taking square footage and applying program to the gesture. Rather than placing a large structure on the site, but splitting these masses into 3 adjoining structures that still adhere to the same rules and parameters from the concept.

Developing program analysis and how program will now alter the form and shape of the building according to its placement and use.

Final form generation is established to locate topography that will best suited for program and access.

Gently making incisions to lift certain portions of the topography so that program can now be placed within the pockets of the buildings.

A form is generated that enhances the trail experience while breaking barriers from infrastructure and helps the community connect back to nature while experiencing nature itself.

Aerial view of the site and building

Overall site plan and context An enlarge site context showing connection from site to the nearby communities and how this trail can draw users to the waters edge through the site.

Site Plan The site plan shows the overall adjacency, land development and concept as to how the building helps the enhancement of this connection to the water, but shows how this connection reaches far beyond into the community and the inner city.

It is apparent that nature is an important factor in this project and by drawing that factor within the site also bridges the gap of terrain vague spaces. Filling up those unused spaces with life and vegetation.

Longitudinal Section (Trail Head) Public Building This section shows the internal relationship between each program and how each is occupied and used.

Building Section (Learning Center) This section shows the internal context of how the building works Structural and programatically.

View community traveling on the trail toward the facility O2

Looking back at the facility from the trail

This sketch shows the location and site context

Using this layering language and how it fits with program underneath

Digital modeling that invoke form and shape according to site conditions

Iterations of curving, undulating and hovering

Concept Models of program and layering

Concept Models of program and layering

The undulating form was what i was looking for within these iterations, which would help conceive the vision of the project in the future

Form iterations of building and program combined along with the concept of access and topography.

Close view, and we see the undulating form in these masses.

Iteration of taking away the undulation but allowing the buildings to read as one structure, not one.

How this form curves over the site.

Iteration models of structure and form

A finalized version of what the building will look like by incorpersting topographic lines and trail accesss through the site.

Another mock-up version of this wisting and bending gesture.

Sun Studies The conclusion from this study, is that less sunlight near the southern passageway during the winter months and more direct sun during the spring and summer months. This concludes that certain portions of the structure must bend or distort its shape to let in more light within the open public spaces.

Beginning works of site model and how the topography help shape the overall building.

Adding texture to the site model that help it blend into the site.

Finalized site model and how smooth it looks 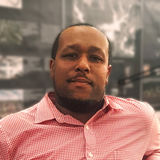 Cities that were once a symbol of positive development in industrial communities, such as Richmond, CA have now become distressed communitie...

Cities that were once a symbol of positive development in industrial communities, such as Richmond, CA have now become distressed communitie...