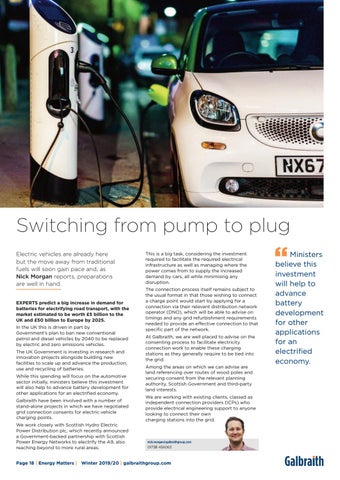 Switching from pump to plug Electric vehicles are already here but the move away from traditional fuels will soon gain pace and, as nick Morgan reports, preparations are well in hand.

this is a big task, considering the investment required to facilitate the required electrical infrastructure as well as managing where the power comes from to supply the increased demand by cars, all while minimising any disruption.

ExPERtS predict a big increase in demand for batteries for electrifying road transport, with the market estimated to be worth £5 billion to the UK and £50 billion to Europe by 2025.

the connection process itself remains subject to the usual format in that those wishing to connect a charge point would start by applying for a connection via their relevant distribution network operator (DnO), which will be able to advise on timings and any grid refurbishment requirements needed to provide an eﬀective connection to that speciﬁc part of the network.

In the UK this is driven in part by Government’s plan to ban new conventional petrol and diesel vehicles by 2040 to be replaced by electric and zero emissions vehicles. the UK Government is investing in research and innovation projects alongside building new facilities to scale up and advance the production, use and recycling of batteries. While this spending will focus on the automotive sector initially, ministers believe this investment will also help to advance battery development for other applications for an electriﬁed economy. Galbraith have been involved with a number of stand-alone projects in which we have negotiated grid connection consents for electric vehicle charging points. We work closely with Scottish Hydro Electric Power Distribution plc, which recently announced a Government-backed partnership with Scottish Power Energy networks to electrify the A9, also reaching beyond to more rural areas.

At Galbraith, we are well placed to advise on the consenting process to facilitate electricity connection work to enable these charging stations as they generally require to be tied into the grid. Among the areas on which we can advise are land referencing over routes of wood poles and securing consent from the relevant planning authority, Scottish Government and third-party land interests. We are working with existing clients, classed as independent connection providers (ICPs) who provide electrical engineering support to anyone looking to connect their own charging stations into the grid.

Ministers believe this investment will help to advance battery development for other applications for an electriﬁed economy. 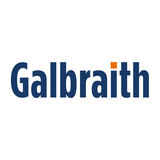