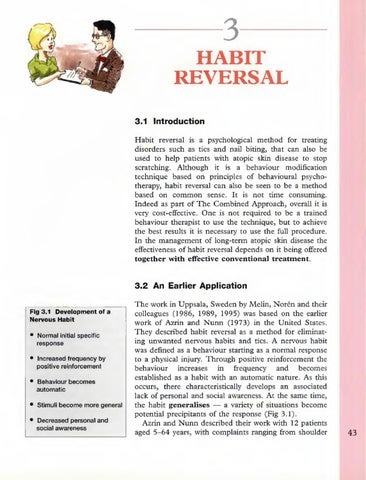 HABIT REVERSAL 3.1 Introduction Habit reversal is a psychological method for treating disorders such as tics and nail biting, that can also be used to help patients with atopic skin disease to stop scratching. Although it is a behaviour modification technique based on principles of behavioural psychotherapy, habit reversal can also be seen to be a method based on common sense. It is not time consuming. Indeed as part of The Combined Approach, overall it is very cost-effective. One is not required to be a trained behaviour therapist to use the technique, but to achieve the best results it is necessary to use the full procedure. In the management of long-term atopic skin disease the effectiveness of habit reversal depends on it being offered together with effective conventional treatment.

The work in Uppsala, Sweden by Melin, Noren and their colleagues (1986, 1989, 1995) was based on the earlier work of Azrin and Nunn (1973) in the United States. They described habit reversal as a method for eliminating unwanted nervous habits and tics. A nervous habit was defined as a behaviour starting as a normal response to a physical injury. Through positive reinforcement the behaviour increases in frequency and becomes established as a habit with an automatic nature. As this occurs, there characteristically develops an associated lack of personal and social awareness. At the same time, the habit generalises a variety of situations become potential precipitants of the response (Fig 3.1). Azrin and Nunn described their work with 12 patients aged 5-64 years, with complaints ranging from shoulder

An account of a new behavioural approach to the treatment of atopic eczema, written for practitioners, but also for patients 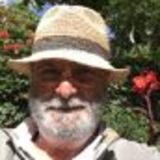