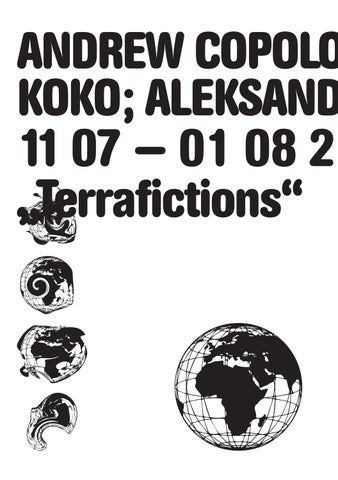 These glyphs are based on the Rongorongo script, developed by the Rapaâ&#x20AC;&#x2122;Nui of Easter Island. As yet, no attempts to decipher the script have been successful.

Our encounter with the natural world is increasingly digitally mediated, and our relationship with nature is increasingly defined by detachment. Softenedscape seeks to project the elusive and inherent intangibility of the virtual. The project extends the draping of nature observed in Christo and Jean-Claudeâ&#x20AC;&#x2122;s wrapped coast) into virtual space, via the digital drapin Mount St. Helens Crater in Washington State, USA. This digital translation of the drape res in object-image that exacerbates the ethereality of the virtual via its faded ghostly resentation that is neither hardscape nor softscape, but rather in a continu ous state of digital transitioning (softening).

(as ng of solves repu-

THE TRUTH ISN’T TRUE…… Visions for a flat futu

Caption: Truth isn’t truth as stated by Giuliani on MSNBC’S meet the press.

When Giuliani states on MSNBC that the “truth isn’t true” 1, he may have b aspirational truths, as opposed to asserting verifiable facts. When framed (aspirational), as opposed to a religious-based provocation, the flat earth as an antidote to globalization. Its rejection of a globed earth becomes pro strued as a rejection of the excesses of globalization: stifling inequality, a liberal elites (i.e.Davos man). Unlike other map projections, the flat earth p conditions of facts (i.e the numerical translations of surface curvature) alo vature of an immensely skewed wealth distribution graph. This aversion o pires for a flat surface - a level playing field - that aims to attenuate exces late capitalism. The image/GIF depicts a Homolosine map projection with excised to conform to the ideological preference of flat earthers. 1.https://www.cnn.com/videos/cnnmoney/2018/08/19/giuliani-truth-isnt-truth-nbc-rs-vpx.cnn